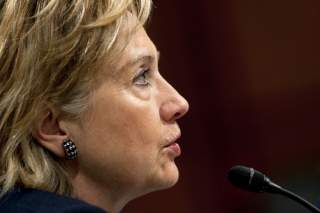 These are times that try a nation’s soul. They demand new casts of leadership, new fonts of thinking, new agendas, new directions. Can Hillary Clinton present herself as the kind of person who can provide this kind of bold leadership for crisis times? Not likely. Will Democratic voters in next year’s primaries turn to her anyway on the strength of her past deeds and survival skills? Perhaps. Will general-election voters usher her and her family back in the White House even in the face of her manifest liabilities? Possibly.

But 2016 could turn out to be one of those unpredictable years in which the pols and polls got it all wrong because of a collective urge on the part of the electorate, lurking under the political surface like a predatory crocodile, to jolt the political establishment in Washington through the sanctity of the ballot box. If so, Hillary Clinton will have to bolster up her game pretty quickly if she wants to survive that kind of development.