Here Is How Russia's Military Industry Is Responding to Sanctions 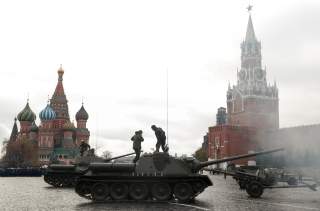 Twitter politics is not just for the White House. On January 8, 2018, Dmitry Rogozin, the Deputy Prime Minister in charge of the military industry, tweeted about the creation of “operational headquarters” within the Military-Industrial Commission (VPK)—the highest decision-making organ in the defense industry. This task force will monitor the impact of U.S. sanctions on the Russian defense industry and on the implementation of State defense orders (GOZ). It will be headed by deputy chairman of the VPK Oleg Bochkarev.

The U.S. Congress adopted the Countering America's Adversaries Through Sanctions Act (CAASTA) in July 2017 and strengthened it in October 2017 with an extended list of more than thirty defense companies and their subsidiaries responsible for GOZ fulfilment, such as Rostec, United Aircraft Corporation (OAK), Almaz-Antey, Kalashnikov and others. Starting January 2018, the U.S. administration will be able to apply extraterritorial sanctions against legal entities and individuals targeted by CAASTA.

Sanctions now officially have the VPK worried. One can only wonder how bad the situation must be for some military-industrial companies. Sectoral sanctions against the Russian military industry are quite a conundrum for the Kremlin. On the one hand, authorities have presented them as a boon for the industry as they remove the dependency on critical Western and Ukrainian components. Russia would argue that sanctions actually made defense companies more autonomous and more productive.

On the other hand, sanctions opened a period of doubt in the defense sector, as bridging the gap left by the breakdown of military-industrial cooperation with Ukraine and the West is proving difficult. In 2014 President Putin declared that he “did not doubt” that adapting to sanctions was fully feasible, although he admitted in 2016 that they represented a “serious challenge” to the military industry.

Moscow was swift to respond to sanctions through two industrial strategies. The first one is import substitution by local production (namely the “Russification” of production) with the establishment of two import substitution programmes in the defense sector—one for Ukraine and the other one for NATO and Western countries. The idea of import substitution had been floated long ago in the defense industry but was set up urgently in the context of sanctions. Accordingly, Russia will have to reach 85 percent of domestic production for military components and equipment by 2025. Although few details have emerged, both programs are not on target and their full implementation has been pushed back several times already.

The second strategy relates to the substitution of imports through other imports from foreign partners. State authorities have devised a two-prong approach. First and foremost, Moscow is increasing its imports from traditional partners (mostly China, India and Belarus), especially for microelectronic components. This means replacing a dependency with another. Meanwhile, the defense industry is looking to set up joint projects with foreign production centers. This partly allows Russia to keep indirect access to Western technologies.

Major issues remain, however. The production of substituted machine-tools and microelectronic components—what Dmitry Rogozin called the two “Achilles’ heels” of the defense industry—is still a problem, as domestic production is limited and cannot match the demand. Furthermore, cost control is another issue the defense industry is facing, as development costs for substituted components increase. Self-sufficiency now comes at the expense of profitability.

Finally, import substitution is hampered by the absence of a comprehensive and integrated nomenclature of the components and subsystems to be replaced. Thorough audits of all import contracts and pricing should have been carried out before launching the programmes in 2014.

More than removing the dependency on Western and Ukrainian defense components, the policy of import substitution in the military sphere implies a deep change in economic policy and in production patterns that has not yet taken place in the Russian defense industry. As long as this is not addressed, sanctions will remain an impediment on state defense orders.

Mathieu Boulegue is a research fellow at the Russia and Eurasia Programme at Chatham House (The Royal Institute of International Affairs).

Image: Russian Army members ride on historical tanks, during a rehearsal for a military parade to mark the anniversary of a historical parade in 1941, when Soviet soldiers marched towards the front lines at the Red Square in Moscow, Russia November 5, 2017. REUTERS/Grigory Dukor