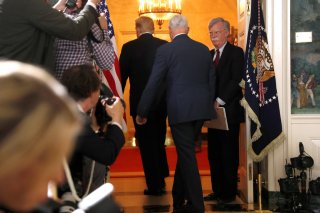 Changes in international relations and world politics rarely happen overnight. Rather, the flow of events makes international actors reconsider their tactics and strategy, adjusting policies in order to achieve their goals. Donald Trump’s decision to pull out of the Joint Comprehensive Plan of Action (JCPOA)—better known as the Iran nuclear agreement—is important by itself. However, its long-term influence may be even more significant. A lot was said and written about the potential impact of Trump’s announcement, but one issue has received less attention that it actually deserves: the U.S. withdrawal from the JCPOA emphasizes the importance of economic means in international conflicts. The growing understanding of this fact is changing international relations in a historic way. Specifically, the U.S. withdrawal shows that American sanctions against one country can have negative, “collateral” effects on others. This development highlights the virtues of Russia’s protests against U.S. sanctions policies.

The past months of public discussions on whether America should pull of out of the agreement obscures the core of President Trump’s decision—the reintroduction of sanctions against Iran. At the same time, the link between the sanctions and the progress of Iran’s nuclear program has been broken: the Islamic Republic is in compliance with the JCPOA, a fact confirmed by U.S. intelligence services, but the sanctions are returning. The Trump administration has made several demands to Iran (never have an ICBM; cease its support for Hezbollah and Hamas; end the publicly declared quest to destroy Israel etc.), pronouncing, that before Tehran fulfills them, it will be subject to sanctions initially developed and implemented to stop the Iranian nuclear program.

What does this move mean for the international relations? Time will tell if Europeans can implement their declarations to both save the JCPOA and to protect European companies from U.S. sanctions for doing business with Iran. This seems unlikely for now, confirming that America’s central role in the world economy gives it an effective foreign policy tool. This also raises the following question: how should other countries counter American economic influence?

Every country has either already integrated this issue in its foreign political thinking or will have to do it sooner than later. Russia, being an object of American sanctions itself, does not need this reminder. However, this gives Moscow a new argument in its communications with other powers: you can become a “collateral” object of American sanctions even if you are not violating the international law and following your international obligations. In this regard, Moscow’s relations with Europe are in the limelight. Last year, Europeans were concerned that the White House was going to strengthen sanctions against Russian energy companies supplying Europe. The rational concerns of Europeans and sane American experts prevailed. After the reintroduction of the sanctions against Iran—with little, if any, regard of Europe—leaders on the continent are asking whether the United States will always have their interest in mind.

Many observers have noted how damaging Trump’s decision to withdraw from the JCPOA is to transatlantic solidarity—but the issue is broader than that. Will America use its economic power to achieve political goals in spite of European economic interests?

Talk of the Trump administration imposing tariffs on Europe highlight this danger. The energy cooperation between Russia and Europe could also be in America’s crosshairs if the showdown between Moscow and Washington intensifies. It is no surprise that Russia’s desire to separate economic cooperation and political issues on the continent is gaining legitimacy.

While Europe is grappling with Trump’s decision, the negative impact of existing American sanctions against Russia is obvious: Moscow has limited access to foreign investment and expertise needed for economic development. Arguably, American sanctions against Iran will be less damaging to Russia than to Europe, China and other Asian buyers of Iranian oil. The major downside for Washington is that the move against Iran is bringing Tehran and Moscow closer together. Russia’s partnership with Iran hardly makes up for lost cooperation with the West, but the two neighboring countries can do more together than separately. Withdrawing from the nuclear deal makes the Islamic Republic the partner of choice for sanctioned Russian companies.

One should not forget that China is one of the participants of the JCPOA. American sanctions will likely push Beijing closer to an actual alliance with Moscow, aimed at curbing American economic influence. So far cooperation with China helps Russian companies in a purely economic sense. Beijing and Moscow have not yet forged a strategic partnership aimed at joint defense against American economic pressure for the sake of political goals. After pulling out of the Iran deal and the looming threat of a U.S.-China full-scale trade war, decision makers in Beijing are reexamining the use of economic tools as foreign policy instruments by the United States. As one of the biggest buyers of Iranian oil, China now has to receive a U.S. waiver. But will Washington issue it? Or will China extend its practices of avoiding U.S. sanctions by avoiding payments in American dollars and regular banking channels? If Beijing decides to build up its capacities to counter the economic influence of the United States, it can be done in cooperation with Russia and other major players. These capacities will allow China—and others sensitive to American pressure—to better compete with the United States in the global economy and diminish the efficiency of American economic tools of foreign policy.

Russia, as a country already feeling American economic pressure, will undoubtedly support such an international effort. While other major powers have a lot to lose from escalating economic conflict with the United States (i.e. China) or, are yet not ready mentally, politically or otherwise to challenge Washington (i.e. Europe) Russia is becoming the leader in establishing cooperation meant to resist American economic pressure. The U.S. withdrawal from the JCPOA gave Moscow one more example to convince others why such cooperation is so important.

Image: White House National Security Advisor John Bolton (R) departs with U.S. President Donald Trump and Vice President Mike Pence after Trump announced his intention to withdraw from the JCPOA Iran nuclear agreement during a statement in the Diplomatic Room at the White House in Washington, U.S. May 8, 2018. REUTERS/Jonathan Ernst​