Here Is What America Should Learn from Hawaii's Missile Scare 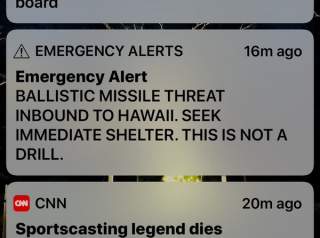 Hawaii endured a now-famous false alarm on Saturday. The alarm this time was about an inbound ballistic missile, not a tsunami. Ridicule of Hawaii’s system and management followed quickly, validating the cliché that no good deed goes unpunished.

Hawaii’s effort should be applauded, not scorned, but dismissive scorn is easier. Politicians demand action to find cause, and assurance that it won’t happen again. Translation: Fire the poor blighter who pushed the wrong button, fire all the officials in the Hawaii Emergency Management Agency’s chain of command from the top to the button, and change the system to require more supervisory layers. Washington’s response is “not our problem, this is a state issue.” Perhaps this belated recognition of the nature of our federal system—with states’ rights and responsibilities—will turn out to be a good thing. But now it sounds like disregard.

We can learn a few things. One obvious challenge is on the watch deck. Its essence is the tension between the dueling imperatives of early warning and accuracy. Adding supervisory layers will slow the response. Firing a few officials will surely prevent false alarms, and establish priority. Recall that Washington was slow to alert Hawaii in early December 1941. In the islands the initial radar detection of many airplanes was ignored in fear of a false alarm.

Another problem is public education and awareness, specifically its absence. Many (most?) were shocked at hearing a real alert, despite being familiar with the system’s operation and purpose. As any veteran of the sea services will attest, hearing “this is not a drill” is chilling and a call to urgent action. But few had any idea where to go, or what to do. That is more frightening than dealing with a known threat.

Most damning is the widespread lack of knowledge on the nature of nuclear detonations and various lethal effects, the factors needed for the public to make informed decisions on everything from protective infrastructure, to preparation, to immediate action and remediation. Meeting North Korea’s threat demands national resilience as well as military capabilities to defend and respond if necessary. Resilience demands knowledge and preparation across the population.

It’s not likely that this lack of resilience is limited to one state in the Pacific. Hawaii is just the first to make it obvious. Related, reports that our Center for Disease Control pulled its planned web-page content on nuclear issues in favor of more flu warnings are not encouraging.

Our lack of civil-sector preparation constitutes an “intelligence failure” of the first order. It’s not a failure of our intelligence agencies. It’s a failure of the rest of us to use our God-given cognitive and analytic capabilities to understand the situation and act on it. One other memorable example: every operational technique used by our enemies on 9/11 was revealed in earlier attacks, both successful and thwarted, in the previous decade. We didn’t worry about these things, and assumed all was under control. Perhaps it was assumed that we could not handle the truth. The current threat seems much more direct and singular, yet we still carry on, untroubled by evident facts.

It does not have to be this way. By contrast, Hawaii is well prepared for Mother Nature’s threats. Tsunamis are often rapid-onset events, requiring early warning systems and preparation. Prominent signage marks areas likely to flood and where land is high enough to offer some security. Public education contributes to a sense of urgency in the event of a tsunami. Responses are thought about before the alert. More important: Hawaii enjoys the service of the Tsunami Warning System in the Pacific, thanks to the National Oceanic and Atmospheric Administration (NOAA). NOAA also operates a similar center in Alaska to serve that state, British Columbia, and our “lower forty-eight” west coast states. It contributes to, and benefits from, membership in the Tsunami Warning System with twenty-five other contributing nations. This system, and its international membership, offer useful models for response to North Korea’s challenge.

North Korea’s threat differs in important ways from Mother Nature’s, of course, but analogies exist in education, preparation and international cooperation. Hawaii’s recent experience must be used to improve public knowledge across our nation of the threat, and decisions on preparations. Perhaps it could include infrastructure. A warning system must be devised, for the United States and its territories. Finally, we must not be in this alone. As with the Pacific Tsunami Warning System, a ballistic missile warning system must be done in cooperation with nations across the region. If we are serious about this threat, we must “handle the truth” and react.

Image: A screen capture from a Twitter account showing a missile warning for Hawaii, U.S., January 13, 2018 in this picture obtained from social media. Courtesy of TWITTER @valeriebeyers/via REUTERS THIS IMAGE HAS BEEN SUPPLIED BY A THIRD PARTY.