Here Is What Chinese Scholars Think about the North Korea Crisis 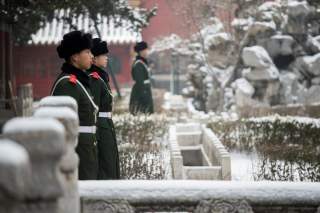 A final group of Chinese scholars discussed in this survey holds the opposite view and contend that it is time to sever ties with North Korea. A scholar of this “camp” is Chu Shulong [楚树龙], who contends that “tolerating amounts to abetting” [姑息养奸]. Chu says that Pyongyang has deliberately made the Korean Peninsula more tense and crossed over Beijing’s “red lines,” damaging Chinese interests. He says China should severely restrict or even suspend aid to North Korea, as well as strengthen sanctions. As part of taking a “tough attitude” [严重态度], China must prepare for all contingencies, including a military conflict, Chu asserts. One other important Chinese academic is mentioned and this is Shen Zhihua [沈志华], who observes that China-North Korean relations have traditionally been “extremely unstable” [非常不稳定] and that Pyongyang has continuously exploited contradictions in Russia-China relations to serve its own interests.

Near the end of the survey, the author makes the candid statement that “it’s very difficult to discern whether or not scholarly opinion has an impact on Chinese foreign policies.” One may go a step further even and ask if this survey of Chinese scholarly views is truly comprehensive. Many noteworthy foreign policy experts are somehow omitted, for example Shen Dingli, Jin Canrong and Wang Jisi. Then, there are experts on North Korea that I have discussed in previous Dragon Eye pieces that are also not mentioned here, including Wang Junsheng or the well-known Zhang Liangui. There is the additional issue that much of the cited literature is a few years old and some of these scholars may well have altered their views given the fast pace of events, especially recently. Perhaps our Chinese postgraduate researcher (on whom we have been relying) should be asked to redraft this important survey? Surely, more work of this kind is necessary on both sides of the Pacific.

Given events of the last week, it is hard to be optimistic about the ongoing North Korea Crisis. However, a precursor to a negotiated way forward may well be a fuller understanding of Chinese assessments, since almost all agree that Beijing will be crucial to the design, diplomatic bargaining, implementation and verification of any deal that brings Northeast Asia back from the brink.