Here is What I Saw at the Valdai Club Conference 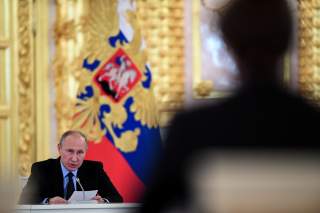 The Valdai Club conference this year took place in an immense, usually empty hotel in the Caucasus Mountains above the town of Sochi. The hotel was built to host the 2014 G8 Summit, which (due to the Ukrainian crisis that year) never happened. That is why although the hotel is surrounded by beautiful mountains and forests, its patrons cannot enjoy them because they are restricted by security fences. In fact, the whole place has a certain air of the hotel from the The Shining, though for better or worse none of the participants resembled Jack Nicholson.

The conference contained no important developments or revelations, but it did raise some very interesting questions. One of those questions centered around the quality of leadership in Western democracies—specifically in a state that does not hold up well in comparison with the leadership of Russia or China. The West has maintained its leadership role through the legitimacy of its democratic institutions. In both the United States and Europe, however, those institutions appear to be crumbling as a result of deepening—and perhaps irreconcilable—cultural, racial and class differences, and a failure to address the issue of migration.

Meanwhile, Vladimir Putin seems to be in quite astonishingly good form for someone who is sixty-five years old and has been in power for eighteen years. Of course, no announcement has been made, but there can be no serious doubt that he will stand for election as president again next year (and win, naturally). On the other hand, there seem to be no real grounds for hope that his administration is capable of carrying out more effective reforms (barring some unexpected crisis).

Certainly we heard nothing about further deep economic reforms at the conference this year. If these reforms are at all possible under the system that Putin has created, then they will have to wait for the next Russian presidency in 2024; and, of course, one of the greatest tests of this system—as of any governing system—will be whether it survives the transition from its founder to his successor. Then again, given the present state of Western democracy, I was surprised to find that some of the Western conference participants had not modified their stance of Olympian superiority towards Russia on such issues.

On relations with the West, the statements and exchanges at the conference were of the “he said, she said” variety that have become so drearily familiar over the years. When one participant remarked that European leaders see the “ball in Russia’s court” when it comes to seeking a resolution of the Ukraine conflict under the terms of the Minsk agreement, Putin remarked that Russia sees the situation differently. Russia believes the ball is in the West’s court when it comes to bringing the government in Kiev to negotiate an agreement on autonomy with the Donbas, he said. Putin expressed no optimism about the situation and he noted that the Ukrainian government was probably too weak and internally threatened to make a deal.

I was surprised that there was no strong statement from Putin in defense of the Iran nuclear deal. Moscow appears to remain committed to the deal, but what I have gleamed from my conversations is that the Russian government hopes Germany, France and Britain will take the lead in standing up for that deal. A division will then appear in the Western camp, which Russia can observe from the sidelines without having to push itself forward.

Once upon a time, Putin’s administration would have hoped that the Europeans would form a bloc with Russia on this and other issues on which they agree, but after repeated disappointments that hope has faded. Judging by my conversations, however, it appears that the Russian establishment’s long-term goal is still to form a cooperative partnership with Germany to maintain stability in Europe in accordance with their common interests. Russia sees no possibility of this with Angela Merkel’s government, but—and this has not been sufficiently recognized in the West—this key long-term goal means that Russia is unlikely to take any step that would be seen in Berlin as directly threatening Germany. For example, it would be unwilling to put military pressure on the Baltic States or Poland (Russians treat Ukraine as a completely separate and unconnected case). Such action would completely wreck Russia’s long-term European strategy and deliver Russia wholly into the arms of China.

On North Korea, Putin said that “we should not drive North Korea into a corner, threaten force, stoop to unabashed rudeness or invective. Whether someone likes or dislikes the North Korean regime, we must not forget that the Democratic People’s Republic of Korea is a sovereign state.”

Putin made a strong statement on the need for the United States to observe existing nuclear disarmament agreements. He went into considerable detail when accusing successive U.S. administrations of violating the terms of both the 2000 Plutonium Management and Disposition Agreement and the U.S.-Russian Highly Enriched Uranium Purchase Agreement of 1993. He also noted that the United States, unlike Russia, had yet to ratify the Comprehensive Nuclear-Test Ban Treaty. It was clear from his remarks that the Russian leadership is determined to maintain rough nuclear parity with the United States and respond to whatever it sees as violations of those agreements by the U.S. side.

In some ways, the most interesting thing about the conference regarding Russian-Western relations was that most of the discussion was not about Russian-Western relations. Instead, conference attendees focused on climate change, social inequality, technological change, genetic engineering, globalization, migration and national identity. One particularly interesting discussion centered around the impact of automation and computerization on jobs, and what measures—if any—could be taken to limit the impact or to ameliorate the immense growth of unemployment and inequality that will likely result from that automation. Another discussion took a hard look at migration from the Muslim world and Africa to Europe. The conversation revealed the complete witlessness of the existing Brussels elites when it comes to meeting—or even thinking—about the migration challenge.

As a number of participants (including myself) pointed out, compared with these existential threats to existing states, the issues currently dividing Russia and the West are likely to seem to the historians of the future (if there are any) so minor as to be almost insignificant. One hundred years from now, our descendants are likely to look back on disputes over Crimea, the Donbas and Syria with the same combination of incomprehension and contempt with which we regard the European elites who went to war over geopolitical issues in 1914. They, too, failed to see that the real threats to their comfortable, civilized world came from within their own societies.

Anatol Lieven is a professor at Georgetown University in Qatar and a senior fellow of the New America Foundation in Washington DC. He is author among other books of Ukraine and Russia: A Fraternal Rivalry.

Image: Russian President Vladimir Putin speaks during a meeting with members of the Presidential Council for Civil Society and Human Rights at the Kremlin in Moscow, Russia October 30, 2017. REUTERS/Kirill Kudryavtsev/Pool