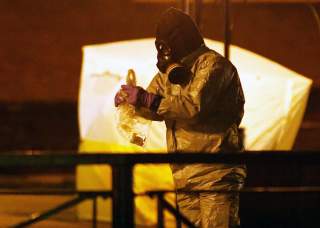 Theresa May is right. Her speech in Parliament cited two possible explanations for the attempted poisoning of Sergey Skripal, an obscure former Russian military intelligence officer convicted of spying for the British and exchanged for captured Russian agents nearly a decade ago:

Either this is a direct attack by the Russian State against our country. Or the Russian government lost control of this potentially catastrophically damaging nerve agent and allowed it to get into the hands of others.

Both explanations have serious implications for the security of our country and our allies. But each requires a much different response. We need to weigh the alternatives carefully, because the wrong choice will exacerbate rather than mitigate the dangers we face.

The court of public opinion both here and in the United Kingdom has already convicted Vladimir Putin of ordering the attack. Three factors are driving the rush to closure. First, a disturbingly large number of Putin’s opponents have been killed, including opposition politician Boris Nemtsov, investigative journalist Anna Politkovskaya, and ex-FSB officer Aleksandr Litvinenko, who was poisoned in London with radioactive polonium in 2006. Second, the weapon of choice—dubbed Novichok (“newbie” or “novice”) by the Soviet scientists who created it in the 1980s—is a sophisticated military-grade nerve agent beyond the capacity of nonstate actors to develop or administer. Third, it is argued that Putin rules Russia with an iron fist. Who would dare conduct such an attack without his authorization?

Presently, we lack information that could confirm or disprove this consensus view. There are, however, some reasons for skepticism. If Putin was trying to show prospective Russian traitors that their Western handlers cannot protect them, he had much safer ways of sending that message. Why use an exotic nerve agent certain to traced to Russia by British scientists? Why compromise your future ability to protect Russia’s own agents in the West by so blatantly violating the spirit of the swap that led to Skripal’s release? And why disrupt fissiparous trends in Europe by picking an unnecessary fight with one of the continent’s military and economic heavyweights?

The alternative explanation might be even more ominous: the attack was carried out by hardline Russian nationalists or agents of a third country hoping to provoke a confrontation between Moscow and the West. Although Novichok was developed in a secret Soviet military laboratory in central Russia, it was tested in what is now Uzbekistan. We cannot be certain that all samples of the weapon were destroyed, and expertise in how to develop and use the agent may extend beyond Russia to include scientists in other former Soviet republics.

Moreover, contrary to conventional wisdom, Putin is not captain of a tightly run ship. His country has long been plagued by factional infighting among political and business elites, and contrary to American perceptions, many Russians see him as too willing to make concessions to the West and not tough enough in defending Russian interests. Acknowledging that he does not control these factions would compromise Putin’s image of authority; claiming that he does would make him responsible for a long list of heinous actions at home and abroad. His studied ambiguity on these matters makes it difficult to tell the difference between things he has explicitly ordered, actions that he favors carried out by proxies and activities that he disapproves but finds difficult to squelch.

Ultimately, Putin is responsible for either directly ordering the attack or presiding over a Byzantine political system that often tolerates, and sometimes, encourages illicit activity. His failure to punish those behind the murders of Nemtsov, Politkovskaya and Litvinenko suggests either that he approved of those actions or lacked to power to prevent them. Still, there is no one-size-fits-all policy response to these contrasting explanations for the Skripal attack.

If Putin is deliberately escalating tensions with the West, we must ensure that he pays a high price, heeding the lessons of Munich in 1938. Bullies tend to back down when they realize they are in for a fight, while seeking compromise with an aggressor only encourages more aggression. The path to peace in such circumstances would be to show that we are prepared for war.

If Putin is guilty more of misrule than misdeeds in the Skripal affair, however, confronting him would risk doing more harm than good. The dangers of a World War I–type escalatory spiral would loom large, particularly if powerful interests in Moscow or other capitals want a showdown. The brakes on escalation—arms control provisions, military transparency measures, and established relationships between senior officials in our respective governments—are all in various states of disrepair. The best course of action in such circumstances would be private dialogue with Putin and other senior Kremlin officials to contain and manage the affair, making clear that they must identify and punish those responsible for the Skripal attack, while working through the Organization for the Prohibition of Chemical Weapons to investigate any third-country involvement.

In choosing the best course of action, you must weigh carefully these alternatives and have the courage to rise above ill-considered pressures from the media. Now is not the time for megaphone diplomacy. Russia is a hyper-sensitive power, quick to perceive slights and slow to forget grudges. The more public our dialogue with the Kremlin, the more difficult it will be to make progress, and the more likely the situation will be to escalate out of our control. Let Theresa May talk loudly. We can support our ally in a low-key manner and quietly carry a big stick, while looking patiently for information that will help determine what really happened with Skripal.

In this regard, your decision to move Mike Pompeo from CIA to State offers us an unusual opportunity to bridge the worlds of intelligence and diplomacy. He has already begun a sensitive dialog with the heads of Russia’s intelligence services about counterterror cooperation. Building on those relationships to discuss the Skripal affair could be a pragmatic first step in exploring the correct course of action.

George Beebe is Director of the Intelligence and National Security Program at the Center for the National Interest. He served as the CIA’s chief of Russia analysis and as special advisor to Vice President Cheney on Russia.