Here Is Why China May Be Moving towards 'Confucian Democracy' 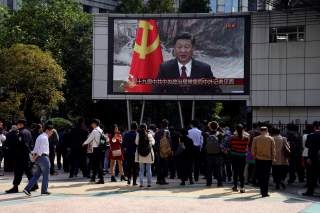 On the eve of President Donald Trump’s first state visit to China, President Xi Jinping just made a drastic foreign policy reversal. Beijing would now accept South Korea despite China’s previous objections of having the American anti-missile THAAD deployment in South Korea. This diplomatic rapprochement between Beijing and Seoul would put the Trump White House in a more challenging position on the North Korean issue.

The growing trade and economic relations between China and South Korea are not the only reasons for this policy reversal. Apparently, China has now gained an ally—and perhaps a friend—while President Trump tweets negatively on bilateral trade and South Korea’s leadership. Soon after the 19th National Congress of the Communist Party of China (CPC), Beijing also signed several trade and investment agreements with Russia.

The calculus of these two diplomatic endeavors is purpose-driven to send a clear message to Washington that the “accidental” president in the United States is no longer the world leader to resolve global issues.

This diplomatic maneuver is a display of Xi’s Thought that is now enshrined in the Constitution of the CPC. It may be called the modern “Communist Manifesto” for the New Era but it was an evolutionary process to stage the “Third Revolution” of the People’s Republic of China (PRC).

The First Revolution started with Chairman Mao Zedong in 1949. He led the Cultural Revolution and the Great Leap Forward to get rid of the backward “feudal” society. The founding generation of PRC considered that the dynastic heritage was an outdated relic of Confucian traditions and a stumbling-block for modernity until the end of Qing Dynasty in 1911. For them, the republicanism that ensued under Dr. Sun Yat-sun and Gen. Chiang-Kai-Shek of the Republic of China was also a transplant of Christian missionaries, Western doctors and English educators to make China a Western nation. For the PRC leadership, Mao’s efforts crystallized the revolutionary force to create an “egalitarian and socialist” society, which eventually ended-up in disaster and tragedy for China.

With Mao’s passing in 1976, the Second Revolution was engineered by Deng Xiaoping. His economic reform and trade liberalization led to unleash the entrepreneurial zeal of the Chinese people. The Deng Revolution made China a manufacturing powerhouse and the largest economy after the United States within a generation.

Now that President Xi has consolidated absolute power as the “chairman of everything”—from the Party, state, military, economy and most importantly the culture—he has sent a “comprehensive and systematic” message that the PRC now has the “cultural confidence” of Confucius to rejuvenate the Chinese nation and its cultural heritage in “socialism with Chinese characteristics for a New Era.” This is the Third Revolution to create a “moderately prosperous society.”

The Confucian Party of China

The Communist Party is in name-only, but the socialist aspects of Xi’s Report resonate with the egalitarian ideas that Mao once espoused through his First Revolution.

President Xi’s “rejuvenation” of the Chinese culture with Confucian values is the hidden message of the New Era of transformation for progressive and assertive China. It would reinvent the Communist Party into a Confucian Party of China—the New Era of CPC—to unify the nation as a Confucian Union.

The Confucian vision of cultural confidence is now combined with Deng’s foundation of a capitalist economy with Chinese characteristics; i.e., running the economy by the “visible hands” of the State-Owned Enterprises (SOEs). President Xi highlighted the importance of SOEs in his long-speech as high-value for Beijing’s new leadership.

The implementation of the Third Revolution of Xi is to restore the DNA of China’s ancient “Confucian” culture of hierarchical authority that Mao tried unsuccessfully to destroy, and to continue Deng’s market reform by giving primacy to SOEs, where Xi is the chairman. Indeed, there is an enduring Chinese philosophy of “I Ching” (The Book of Change) of “continuity and change” to explain President Xi’s Thought, which is now synchronized with the Party’s Constitution as a unified force of Confucian doctrine.

President Xi’s notion of “concentrated power” is antithetical to the democratic values of the West. It is natural for the Western media to characterize Xi in a reflection of “the Great Man Theory” in action as if the accumulated power of populist leader derived from his ruthless anticorruption campaign.

The theory then arguably explained the realities of becoming heroes and leaders of the past. Xi may not have personal charisma, innate intelligence and practical wisdom Mao seemed to have during the brutal First Revolution. Yet Xi has demonstrated the validity of the theory with his political acumen like Deng, a transformative leader.

During his first term, President Xi promoted Confucian values as part of the Chinese DNA in his revival theme of Chinese culture and the “China Dream.” Confucian teachings are now coming of age in China and around the world as President Xi’s “China brand.” All these things were made possible by Deng’s Thought on openness and market reforms, enabling Beijing to spend and invest money on Xi’s projects like the Confucius Institutes and the Belt and Road Initiative (BRI). It seems that Xi will continue the Deng approach of openness and “globalization” as he reaffirmed to the global community at the World Economic Forum in Switzerland earlier this year.

His team of seven in the Central Politburo’s Standing Committee, who are in their sixties, may leave room for Xi to continue his presidency for an extended period than the unwritten norm dictates. Yet the future performance in Confucian ethos is not guaranteed given the challenges that China faces both in domestic and foreign affairs.

While reflecting on the rise and fall of “great” emperors (and the only-female Empress Wu in the Tang Dynasty) in China’s perennial history, it is too early to predict the destiny of Xi in considering the Great Man Theory—especially the prediction of his future. If one does not believe in this, just think about the unexpected arrival of President Trump.

Testing the Merits of Confucian Governance

There seems to have obvious parallels between the hierarchical aspects of Confucian ethos in the Chinese DNA and the authority aspects of Communist ideas imported from the Marxist-Leninist ideology. This formula may work in China for now.

In social intercourse and political governance, however, President Xi and his leadership must be vigilant about two dynamic forces or challenges in China’s increasingly restless society.

First, China must sustain its current economic growth to address the poverty alleviation and provide employment opportunities—especially for the young people beyond the Party membership of 89 million. The hierarchical concentration of livelihoods in urban high-rise buildings is a futile way to control the masses when people are now horizontally and democratically networked.

Second, China must re-engineer its old imperial appeal for Confucian ethics in governance. This is especially true in regards to the hierarchical political leadership at the national, provincial and local levels. Lethargic bureaucracies are being tested as the anticorruption campaign further demoralizes the public service. The cherished traditions of family relationships are also breaking down. The divorce rate is increasing at an unprecedented rate and there are growing cohorts of independent-minded children now acting more like “Bananas”—yellow outside on the outside, but white (Western) on the inside—than the offspring of old-style Chinese society of the Confucian past.

Nonetheless, the outlook for Beijing is not entirely pessimistic. The amalgamation of foreign ideas and local traditions have long been immersed throughout China’s history. For example, Buddhism was imported and integrated with Confucian ethics and Daoist ideas—much like the three branches of a single river—that is intimately tied to spiritual, cultural and political authority from one dynasty to another. Thus, it would be quite possible that the foreign ideas of Marxism-Leninism might be coalesced into a unifying force of the “socialist” republic with Chinese characteristics.

After Xi’s policy reversal on South Korea and the signing of a bilateral treaty with Russia, it is clear that President Xi’s is hoping to take on more responsibilities in global leadership.

Professor Patrick Mendis is an Associate-in-Research of the Fairbank Center for Chinese Studies at Harvard University and the author of Peaceful War: How the Chinese Dream and the American Destiny Create a Pacific New World Order, also translated into Mandarin Chinese in Beijing.