Here Is Why North Korea Will Give Up Its Nuclear Weapons 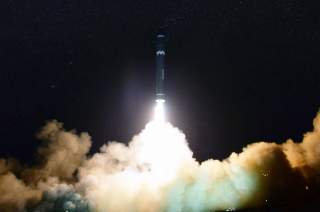 “If we meet often and build trust with the United States and if an end to the war and nonaggression are promised, why would we live in difficulty with nuclear weapons?” Kim Jong-un told South Korean president Moon Jae-in on Friday. “I know the Americans are inherently disposed against us, but when they talk with us, they will see that I am not the kind of person who would shoot nuclear weapons to the south, over the Pacific, or at the United States.”

Sunday, South Korean officials revealed Kim’s words, which reinforce the promises he made in the Panmunjom Declaration for Peace, Prosperity, and Unification of the Korean Peninsula, signed at his historic summit with Moon.

The Declaration promises, among other things, the “complete denuclearization” of the Korean Peninsula.

Color just about everyone skeptical that the Democratic People’s Republic of Korea will give up its most destructive weapons. As Chris Nelson wrote just hours after the Declaration was signed, “No credible expert on the DPRK argues there is a price which, being met, the Kim Regime will ever relinquish all its nukes, period, given Libya and Iraq.”

There is indeed such a price, and it could be incredibly low. The Kimster will almost certainly give up his nukes if he believes he would lose power if he does not do so. President Donald Trump, therefore, may just have to ask nicely.

How can this be so?

As Nelson suggests, it is exceedingly unlikely that Kim wants to surrender his nuclear weapons. Yes, it appears he agreed to do so Friday, but, as Sung-Yoon Lee of the Fletcher School told the National Interest, “Kim Jong Un’s ploys are completely unoriginal and rather lazy.”

Lee’s right about Kim’s unoriginality. The North Koreans have just recycled old language into new pledges. Friday’s promise follows similar ones the North made in the Joint Declaration of the Denuclearization of the Korean Peninsula, signed January 1992; the Agreed Framework of October 1994; and the Joint Statement of the Fourth Round of the Six-Party Talks, issued September 2005. These vows were made after the most important one of all: the commitment in the Nuclear Nonproliferation Treaty (NPT). Pyongyang acceded to the global pact in December 1985.

In view of the four-decade trail of broken commitments, just about nobody believes Kim’s promise in Friday’s declaration.

This time, however, there are two principal reasons for Kim to comply. First, there are Trump’s threatening words—backed up by those of National Security Advisor John Bolton when he was a Fox News contributor—and those of Trump surrogates like Sen. Lindsey Graham. “The loud talk about ‘fire and fury,’ combined with the sight of aircraft carriers sailing towards Korean shores, have not failed to impress concerned parties, including the North and South Koreans, as well as the Chinese,” Andrei Lankov of Kookmin University wrote last month. “Towards the end of 2017, the positions of all these countries underwent rather dramatic changes—and the best or only explanation for this is simple: these countries were increasingly afraid of a war breaking out.”

The threat of strikes on his nuclear and missile facilities is the best explanation why Kim made concessions to Trump—such as last Saturday’s announcement of the suspension of testing and the closing of a test site, even before meeting the American president.

There is another reason why Kim could decide, with surprisingly little resistance, to turn over his nukes: Trump’s sanctions have substantially depleted Kim’s coffers. Office No. 39, the family slush fund, is low on cash according to Chinese sources, and South Korean sources believe Pyongyang could exhaust its foreign currency reserves by as early as October. The elite trooper who defected last November had uncooked kernels of corn in his digestive tract, suggesting the army cannot feed even its most privileged soldiers serving in some of its most sensitive posts.

Without cash, Kim cannot launch missiles; detonate nukes; or keep himself in power with “gift politics,” the buying of loyalty by handing out luxury items to senior regime elements.

So far, sanctions have been tight, but they have been designed only to get Kim to the negotiating table. In this regard, they have apparently succeeded. Trump stated last Tuesday that Kim was in a hurry to talk, wanting to meet “as soon as possible.”

That’s a sign the North Korean leader needs relief from coercive measures. Yet an eagerness to meet does not, of course, necessarily translate into making major concessions.

Trump can force concessions by tightening the sanctions on Kim, and, if that doesn’t work, by stepping up the pressure on his great-power sponsors, Russia and China. Trump has signaled that he would target Chinese banks—a weak point for Beijing.

China’s banks, despite warnings from both the Obama and current administration, have continued to handle cash for the North Koreans. Trump officials, according to Bloomberg, decided earlier this year not to enforce money-laundering laws against the second- and third-largest Chinese banking institutions, China Construction Bank and Agricultural Bank of China. Both banks are suspected of handling dirty transactions for North Korea.

The largest and fourth-largest banks, the Industrial and Commercial Bank of China and Bank of China, are almost certainly engaging in this activity as well.

That makes all of China’s so-called “Big Four” banks vulnerable to either large—hundred-million-dollar or billion-dollar—fines or designation as “primary money laundering concerns” pursuant to Section 311 of the Patriot Act. Designation would disconnect a bank from the global banking system, essentially a death sentence for that institution and perhaps for the already fragile Chinese banking and financial systems.

Beijing is enforcing sanctions against the North better than two years ago, but not compared to two months ago. North Korean workers are now returning to China, a clear violation of UN Security Council measures. There is fresh Chinese investment into the Rajin-Sonbong special economic zone, another apparent violation. China is also importing sanctioned iron alloys from the North.

And then there is the matter of gifts Xi Jinping showered on Kim Jong-un and his wife last month in Beijing. The giving of those items—porcelain, jewelry, and other valuables estimated to be worth $394,000—was a blatant contravention of UN rules.

Trump, by threatening China, may be able to force Beijing to cut off Kim completely. Should China completely sever commercial and financial ties with him, North Korea will have no choice but to obtain relief from Trump.

“A new history begins now,” Kim wrote on Friday in Moon Jae-in’s visitor’s book in the Peace House. Those words sound like typical North Korean propaganda, but Trump has the leverage to force Mr. Kim to make the bold statement true.