Here Is Why Switzerland Did NOT Start a Currency War 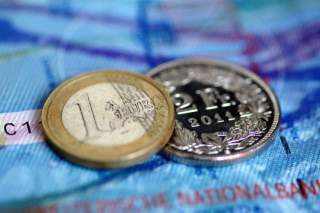 Not too long ago, the Swiss National Bank (SNB) gave up the peg it had maintained for years between its franc and the euro. Market reaction was sudden. Within minutes of the announcement, the franc, or swissie as it is called in currency-trading circles, rose almost 40 percent against the euro. Several articles in the financial media described these events as the start of a “currency war.” That is a catchy phrase. It is nonetheless misplaced. Recent and likely currency moves are much less a matter of targeted, warlike policies than they are a reflection of economic and financial fundamentals that have continued, and for the time being at least will continue, to favor the swissie and the dollar over the euro and most other currencies. The only targeted currency policy was Switzerland’s efforts to keep its franc cheap, and the central bank’s action signals defeat, not the start of a war.

The story surrounding Switzerland’s action is certainly the most dramatic aspect of the currency picture. It began in 2011, when the eurozone's ongoing fiscal-financial crisis prompted many to search for a safe haven from the euro. Moneys flooded into Swiss francs raising the swissie’s value some 25 percent against the euro between late 2009 and August 2011. Afraid that this appreciation would hurt Swiss exports and thus the Swiss economy, the central bank decided to intervene actively in currency markets. By selling swissies and buying euros to offset the pricing effects of other inflows, it held the franc rigidly at 1.20 to the euro. Since Switzerland can theoretically create as many swissies as it wishes, the presumption was that the bank could maintain such policies indefinitely.

It is now evident that it could not. The decision to abandon the peg seems to have grown most immediately out of the European Central Bank’s (ECB) turn to quantitative easing. Concern over the threat of deflation in the eurozone and an intensification of its fiscal-financial crisis has prompted the ECB to earmark some €1.14 trillion to buy bonds directly on European financial markets. The SNB could see that even a small part of such a flood of euros could overwhelm its sales of swissies. The bank may also have abandoned the peg, because it feared the inflationary effects of so much money creation and from following the euro down on global currency markets, though the ongoing threat of deflation in the eurozone would make such a prospect distant indeed. As it is, the sharp appreciation in the swissie will tend to intensify deflationary pressure in Switzerland.

Still, the Swiss National Bank has not capitulated entirely. To dissuade people from buying its currency, it has driven down short-term interest rates half a percentage point deeper into negative territory than they already were. Now a depositor in Swiss francs must pay up to 1.25 percent interest for the privilege of leaving money in the bank. From the currency’s action recently, these negative rates are hardly discouraging enough to stem the tide seeking a safe haven in Swiss banks and in the franc.

If the tale from Zurich offers the most drama, the larger currency story concerns the rise in the dollar. Once written off as having lost its supremacy, the dollar has gained markedly during the past six months or so, jumping almost 18 percent against the euro and almost 12 percent against the pound sterling. The overall dollar index shows about a 15 percent rise against a composite of world currencies during this time.

As much as Europe may welcome the euro’s slide as a spur to exports and hence economic prospects, these currency moves hardly resulted from targeted policies. Instead, they reflect the more attractive environment in the United States for all sorts of investment. U.S. bonds, for instance, offer much more attractive returns. Yields on ten-year U.S. treasury bonds pay 1.5 percentage points more than German government ten-year yields. Meanwhile, U.S. government finances, though hardly robust by historic standards, still look a lot less precarious than European finances, where most of the periphery still cannot shoulder their debt obligations without help from the European Union (EU) and the ECB, and where Greece has again brought up the prospect of debt repudiation or rescheduling. Relative economic conditions in the United States are similarly attractive. Recent strong U.S. real GDP growth may overstate the economy’s underlying strength, but the United States is definitely growing and considerably more robustly than the eurozone, where the economy can claim only a technical distinction from recession. Though British interest rates, finances and economics more closely resemble those in the United States than the eurozone, its economic ties to the continent tend to pull sterling along with the euro.

Since there is little prospect that relative economic and financial conditions will turn around anytime soon, it looks like the dollar will continue to gain going forward. The latest round of trouble with Greece will only increase European uncertainties and exaggerate the differences favoring the United States. If the Federal Reserve follows through with its promise to raise interest rates, it will add further to the yield spreads favoring the dollar.