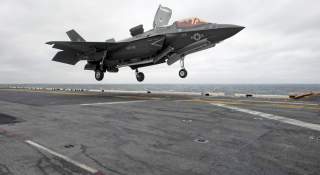 The latest National Defense Authorization Act (NDAA), which allocates defense spending for the fiscal year 2019, sets the stage for a stronger U.S. response to China’s assertive behavior in the South China Sea. Passed by Congress on August 1 and signed by President Trump on August 13, the NDAA contains several promising measures, including authorization for greater transparency from the Pentagon on China’s coercive activities.

Following “any significant [land] reclamation, assertion of an excessive territorial claim, or militarization activity by the People’s Republic of China in the South China Sea,” Section 1262 of the NDAA calls for the Secretary of Defense to “immediately” submit a report to Congress and the public.

Up until this point, a persistent lack of transparency has plagued the South China Sea, forcing the public, researchers, and the media to rely on commercial satellite technology for information on these disputes. Advocates for greater transparency such as Ely Ratner have argued, “the dearth of public information about China’s activities in the South China Sea has hampered regional coordination and abetted China’s ability to take incremental steps to consolidate control.”

Considering the concurrent evolution of China’s assertive behavior in, U.S. policy toward, and the American conversation on the South China Sea, the reports mandated by the NDAA would be game changers if effectively implemented. Seizing control of the narrative would help Washington to reinvigorate public interest in the disputes, unite regional partners, and pressure China.

The South China Sea territorial disputes began in the mid-twentieth century, periodically heating up between the 1970s and 1990s. After a period of relative stability in the early 2000s, tensions steadily increased from 2009 onward thanks to Beijing. Notably, China wrested control of Scarborough Shoal from the Philippines in 2012, and a sparked a two-month-long standoff with Vietnam by deploying an oil rig in contested waters in 2014.

The next phase of escalation began when China’s land reclamation projects took off in 2014. Evidence of China’s island-building in the Spratly Islands first hit the news in May 2014. Researchers report that China actually began its land reclamation in late 2013. China’s island-building projects grew rapidly, in total reclaiming over 3,200 acres of land.

Since 2014, China has installed radar facilities, airstrips, structures intended to house missiles, and military jamming equipment on its artificial islands. Though China is not the first country to construct such facilities in the South China Sea, the scope of its activities far surpasses that of any other claimant.

On May 2, 2018, a bombshell CNBC report revealed that China deployed YJ-12B anti-ship cruise missiles and HQ-9B surface-to-air missiles on Fiery Cross Reef, Subi Reef, and Mischief Reef. Though China installed missiles in the Paracel Islands in 2016, this incident marked the first time that China placed missiles in the Spratly Islands—an unambiguous escalation of its militarization program. Later that May, China landed long-range bombers in the Spratly Islands for the first time.

In reaction to these developments, the United States disinvited China from the Rim of the Pacific Exercise (RIMPAC). The Department of Defense described this disinvitation as an “initial response.” Now, with the fiscal year 2019 NDAA passed, we are about to see the follow-up from Congress.

In recent years, growing instability has pushed the United States to intervene more directly in the South China Sea. At a meeting of the ASEAN Regional Forum (ARF) in July 2010, Secretary of State Hillary Clinton announced that the United States was now prepared to play a direct mediating role in the disputes—a significant policy shift. In the years following Clinton’s announcement, the United States upgraded its defense partnership with the Philippines, lifted its lethal weapons embargo on Vietnam, and deepened its ties with ASEAN—among other measures.

Since October 2015, the U.S. Navy has conducted several Freedom of Navigation Operations (FONOPs) in the South China Sea to challenge the legitimacy China’s land reclamation projects. However, as the past few years demonstrate, FONOPs cannot halt China’s steady military buildup, nor are they designed to do so.

Washington’s reactions to turmoil in the South China Sea receive the lion’s share of attention, but rising tensions have also drawn the interest of broader American audiences. According to ProQuest’s U.S. Newsstream database, coverage of the South China Sea in American newspapers increased from 239 articles tagged as “news” in 2009 to a peak of 4061 articles in 2016.

While the media started devoting greater attention to the disputes, so too did American politicians. Candidates from both major U.S. political parties debated the South China Sea for the first time during the 2016 presidential election cycle—further evidence of the issue’s increased saliency in the American public sphere.

However, interest in the South China Sea seems to have slipped since 2016. Only 2245 news articles mentioned the South China Sea in 2017, reflecting a “false calm" narrative that emerged in the wake of the 2016 Hague ruling and the absence of any significant incidents. This downward trend appears to have continued so far in 2018, with potential for China's recent provocations reinvigorating American interest.

Section 1262 of the NDAA will be crucial in reversing this worrying trend. Washington will need the American public’s support if it hopes to counter China’s “maritime insurgency” in the South China Sea. If evidence of China’s coercion remains shrouded behind layers of classification, Americans will have little reason to support tougher and possibly riskier measures. The White House, Congress and the Pentagon all must take their case to the people.

Moreover, Washington needs the support of regional partners and their publics, especially the Philippines. Since coming into power, the Duterte administration has frequently downplayed the significance of the disputes and yielded to China. If the people of the Philippines had greater access to information about China’s coercion, Duterte might face pressure to stand up to China.

Additionally, the NDAA offers Washington an opportunity to counter Beijing’s disingenuous narrative. For example, Beijing often responds to criticism by accusing the United States of militarization and pretending that other claimants engage in similarly assertive behavior. Regular public reports on China’s coercion and militarization would go a long way in challenging Beijing’s disinformation campaign.

The potential benefits of greater transparency become even more obvious when considering the efficacy of previous transparency efforts. The availability of public information about the South China Sea expanded from 2014 onward, facilitating an explosion of interest that lasted through 2016.

Actors in the U.S. government also appear to have initiated a campaign to raise the profile of the South China Sea. For one matter, starting around the first U.S. FONOP, “unnamed [defense] officials” began leaking information about the South China Sea to the Reuters on a regular basis. Given the consistency of these “leaks,” there is a good chance that somebody authorized them.

Furthermore, the Pentagon allowed CNN reporters on board a P-8A Poseidon for the first time, allowing them to capture and publish attention-grabbing footage of the Chinese navy warning off the American plane over the South China Sea. The U.S. Navy itself also published surveillance footage from the flight and the audio of the incident on its YouTube page.

The information provided by AMTI and U.S. government actors allowed interested parties across the world to grasp the extent of China’s maritime coercion, generating much interest in the disputes. However, these measures themselves were implemented by several different parties, each faced with their own limitations. Section 1262 of the NDAA promises a coordinated transparency effort, synthesizing government resources to provide Congress and the public with timely intelligence.

On April 17, 2018, the new head of the U.S. Indo-Pacific Command Adm. Philip Davidson informed Congress, “China is now capable of controlling the South China Sea in all scenarios short of war with the United States.” While greater transparency alone cannot counter China’s coercion, seizing control of the South China Sea narrative is a necessary step in the right direction.

Zachary Haver is a research assistant for George Washington University focused on China. Parts of this article are adapted from his working paper, “Constructing a Revisionist China: American Narratives of the South China Sea Territorial Disputes, 2009-2016.” Find him on Twitter at @zacharyhaver.