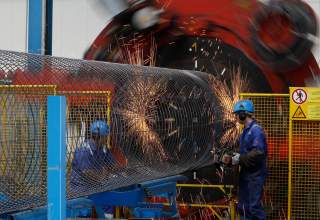 The United States faces a narrowing set of strategic choices as the Nord Stream-2 (NS2) gas pipeline project edges closer to becoming a reality. For instance, it can impose sanctions against European firms supporting the line, capitulate, or find a way to offset the pipeline’s potential utility as a Russian tool of geopolitical influence.

Washington should now ask its Central and Eastern European partners (1) how it can help them build more liquefied natural gas (LNG) import capacity and (2) how can America better support additional pipeline capacity across Europe to more efficiently distribute gas across the continent? Successful execution of these steps would significantly neutralize NS2’s potential geopolitical benefits to the Kremlin. We call the policy “gas geoeconomics,” in a nod to U.S. Ambassador Robert Blackwill and Jennifer Harris, who co-wrote War by Other Means. They define “geoeconomics” as using “economic instruments to produce beneficial geopolitical results.”

Moscow’s motivations behind NS2 are probably not purely commercial, notwithstanding strenuous protests to the contrary by the project’s Western European spokespeople. But regardless of the Kremlin’s motives, a U.S.-led gas geoeconomics strategy would complement emerging gas market dynamics and mitigate NS2’s coercive potential. This would be done by advancing the creation of a more competitive and diverse natural gas market in Europe.

Energy security is best assured by a deep and fungible marketplace, where molecules can be freely traded and can flow toward disruptions. American-backed strategic gas projects would do exactly that by increasing European consumers’ access to flexible seaborne gas cargoes from a diverse array of suppliers around the world. This would also ensure that they could move more efficiently within the intra-European pipeline network.

Gas geoeconomics would also help address an underappreciated aspect of Russian-European gas security relations: Ukraine’s own domestic gas dysfunctionality. A Russian move toward alternative gas supply routes would deprive Kiev of billions of dollars per year in gas transit rents. It would also force Ukraine to purchase its gas at market rates sourced via pipeline from Central Europe. This would seriously pressure energy-intensive Ukrainian heavy industries that rely on subsidized gas supplies from Russia, and perhaps even result in gas market reform in Ukraine.

Such an approach by the U.S. government could, in turn, help push the Ukrainian government toward commercial terms sufficiently favorable to attract multinational energy companies to develop the country’s considerable offshore gas deposits in the Black Sea. Notably, such an outcome would result in a more self-sufficient Ukraine.

Additionally, a gas geoeconomics approach is highly feasible. Unlike sanctions, it would leverage market forces, not require enforcement, and benefit consumers across Europe through greater gas availability and, all else equal, lower prices. U.S. sanctions directed against Russia often create serious diplomatic frictions, but it is very unlikely that European political figures—even those skeptical of the U.S.—would oppose improved access to competitively priced natural gas supplies that a gas geoeconomics strategy can facilitate.

Possible options for executing a gas geoeconomics strategy include: (1) loans that can be “forgiven” if recipients meet designated benchmarks, (2) one-for-one matching of local and/or European Union capital outlays (perhaps through the European Investment Bank), (3) regulated rates of return for private infrastructure developers, and (4) preferential project finance. Importantly, our analysis strongly suggests that each of these potential channels could be conducted in a manner fully compliant with EU laws.

Gas geoeconomics projects are also affordable. A floating storage and regasification ship capable of supplying the entire annual gas needs of a small European country can be leased for approximately USD 40 million per year. To put the scalability of multiple small investments into perspective, consider this: a $1 billion annual investment in strategic European gas supply infrastructure could secure gas import capacity equal to what Algeria supplies to the Continent each year, while only requiring 0.02% of the total U.S. federal budget for fiscal year 2019 and about 0.15% of anticipated defense spending in that fiscal year. The costs associated with developing infrastructure with a gas geoeconomic aim would primarily fall in the program’s first few years—during construction—while its benefits in providing a hedge against potential Russian coercion would endure for decades.

Finally, there is a further important wrinkle. If Nord Stream-2 does come online, the flood of gas it would unleash into Germany would likely overwhelm key points in the existing infrastructure linking German and Central European gas consumers. This will most likely create price disparities large enough to stimulate the construction of additional pipeline capacity between markets. Such a new and fundamentally commercial impetus for boosting gas connectivity between regional markets offers an excellent opportunity for capital investment, with or without EU and U.S. involvement.

America now has a window of opportunity in which to intensify its gas diplomacy and support gas geoeconomics projects to help its partners lock in a decades-long hedge against Russian energy coercion in Europe. Doing so would accord with a longstanding, bipartisan tenet of U.S. foreign policy and national security strategy—ensuring the free flow of energy supplies to key markets and allies. Coupling gas geoeconomics projects with the new price and volume dynamics NS2 will bring to Europe would enable Washington to maximize Nord Stream-2’s commercial benefits to Europe while undermining Moscow’s ability to weaponize the pipeline’s gas flows.​

Gabriel Collins and Anna Mikulska are members of the Center for Energy Studies team at the Baker Institute for Public Policy in Houston. This article is derived from the study “Gas Geoeconomics in Europe: Using Strategic Investments to Promote Market Liberalization, Counterbalance Russian Revanchism, and Enhance European Energy Security,” originally published in May 2018. The opinions and positions expressed in this analysis are exclusively the authors’ private views and do not represent the views of Rice University’s Baker Institute for Public Policy.

Image: Worker at a welding machine prepare a steel cage for the concrete cover of the pipes for theNord Stream pipeline at a storage facility in Mukran on the Baltic sea island of Ruegen April 8, 2010. Nord Stream will have two pipelines, each with a capacity of 27.5 billion cubic meters a year, on the Baltic Sea floor stretching from Russia's Vyborg near the Finnish border to Greifswald on Germany's coast. The 1,220 km-long (758-mile) Nord Stream pipeline will eventually pump 55 billion cubic meters of gas per year to Western Europe, bypassing traditional transit nations. The first pipeline is planned to be completed in 2011. REUTERS/Christian Charisius (GERMANY - Tags: ENERGY)