Here's How the Negotiations over the Next Iraq Government Are Going 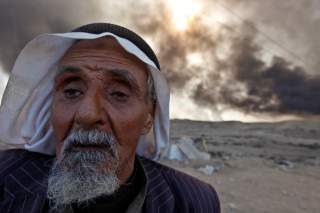 The chaos sweeping Iraq has become so deep—even by Middle East standards—that the country’s top religious leader is taking it upon himself to try to restore calm and create a political roadmap.

The delay in the formation of an Iraqi government and violent demonstrations in the south prompted Grand Ayatollah Ali Sistani on September 10 to directly enter the political fray, declaring that no one in power in the past should become the next prime minister.

Sistani, who ordinarily abides by the Shi’a Islamic tradition that clerics should remain outside politics, intervenes only on rare occasions and only when Iraq is on the brink of disaster. But he took the unusual step and declared that past politicians should step aside and be removed from consideration as the new prime minister because “most of the public no longer has faith” in the current leaders.

As a result of his opinion, the current Prime Minister, Haidar al Abadi, who was the United States’ choice to serve a second term, is now out of the running. The Iraqi parliament is scheduled to meet September 15 to try once again to form a government. A national election was held in Iraq May 12, but the two coalitions that won the most votes have both been competing to form a government—thus the stalemate. Secret talks over the last week in Najaf, the holy Shiite city that is Ayatollah Sistani’s base of power, may lead to the two coalitions unifying to form a government on September 15.

The coalition that came in first is headed by Muqtada al-Sadr, the traditionally anti-American cleric, who aims to form a government of national unity. The other coalition that came in second is headed by Hadi al-Ameri, who is a militia commander and staunch Iranian loyalist. Sadr issued a statement on September 13 that he may be willing to unify with Ameri to form a government based upon certain conditions. One condition is that a technocrat—not a sectarian politician—be chosen as the next prime minister.

The public’s lack of trust in a series of Iraqi governments has sadly been the hallmark of the country’s modern history. This latest crisis in Iraq comes as Basra, a major Shi’a city in the south, is set ablaze over anger with a lack of electricity, jobs and public services.

The story of the violent protests in Basra is a broader lesson about Middle East politics—it was neighboring Iran that cut the electricity supply, and now it is clear Iran has overplayed its hand. Now Iraqis are rebelling against Tehran's foreign intervention and perhaps all foreign control in their country.

When I was in Iraq in late June, many Iraqis told me they believe the government has allowed Iran too much power over their country. Iran supplies everything from electricity to foodstuffs. This anger has now reached unprecedented levels and last week protestors in Basra attacked the Iranian consulate there, shouting, “Iran out” as they set the building ablaze.

Sistani’s statement to ban those in power in the past from seeking the post of prime minister is also directed at Iranian loyalists who have been working closely with Islamic Revolutionary Guard commanders from Iran to achieve just that. The Revolutionary Guards are in Iraq and control Shi’a militias there that have become freelance power centers outside the Iraqi government’s control.

Iran’s decision to cut the electricity supply to Basra did not happen by accident. Many Iraqis believe Tehran’s strategic plan in Basra was as follows: Cut off the electricity supply, claim it is due to shortages inside Iran, and make Basra the epicenter of a protest movement that would go viral and spread across the country. Blame the United States, even though Washington has nothing to do with it. This would discredit the sitting Abadi government, which is U.S.-friendly, and knock Abadi out of the running.

As rival Iraqi factions compete for power, Tehran had hoped all the violence and instability would empower their loyalists as they try to form the next government and select their man, militia commander Amiri, as the new prime minister.

For Iran, however, all has gone awry. In pushing the population to the brink, Iraqis are mostly blaming Iran, even though they also blame their government. And it is the Shi’a who are voicing the greatest anger with Shi’a Iran. Abadi is the first fall man, but this does not get Iran much closer to controlling the next government in Baghdad.

Sadr will stop at nothing to succeed in shaping the next government. Quick to respond to anger directed at Abadi, Sadr called for Abadi’s resignation. For weeks, it seemed Sadr was including Abadi is in his winning coalition and positioning him as serving another term as prime minister. But as Iraqi politics goes, Sadr apparently has now deemed Abadi disposable.

Abadi has become a liability for Sadr. Not only is his government being blamed for a lack of public services but he has said Iraq may comply with U.S. sanctions re-imposed on Iran—which would be a serious blow to Iraq's ability to trade with Iran. Iraq is very dependent on Iraq economically. There is widespread anger among Iraqis at the United States for re-imposing sanctions on Iran. After all, they will be seriously affected, and they remember living under U.S. sanctions for decades when Saddam Hussein was in power.

In the backdrop of all the chaos and Iran’s maneuvering stands the United States, somewhat in the shadows. At the time of the May 12 election in Iraq and in June when I was there, Iraqis asked aloud why Washington was not pushing back hard against Iran’s attempt to form the next government.

Eventually, the United States become more involved and recently special U.S. envoy Brett McGurk traveled to Iraq and met major political players and urged them to resolve their differences form a government immediately. U.S. officials also have made it clear that the United States would like Abadi to serve a second term.

Who knows who will lead the next government, if there is one. In the meantime, a cleric opposed to Iranian influence and holding court in Najaf is taking unprecedented steps to try to bring order to a weakening state.

Geneive Abdo is a resident scholar at the Arabia Foundation and the author of four books, most recently, The New Sectarianism: The Arab Uprisings and the Rebirth of the Shi’a-Sunni Divide.