Here's How Private Contractors Can Help Win the Afghan War 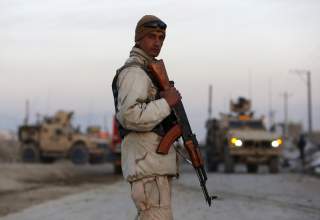 The president has declared a “path forward” for Afghanistan. Given that the United States is at a nexus for strategic change, might there be an increased role for private contractors in positions previously held by U.S. troops? A proposal from Erik Prince, formerly the head of Blackwater Worldwide, claims that with the use of his “corporate warriors” he can end the war in Afghanistan. Can it work? History suggests that it can. But to be successful, it would require a level of commitment and integration not yet demonstrated. It also relies upon the imperatives of capability, capacity and efficiency, as well as the effectiveness of those chosen to perform the task that the U.S. military has been unable to accomplish: winning the war. First, though, there must be a real understanding of what private security contractors (PSCs) actually do, and how they can and will be held accountable for their actions.

What We Are Doing Is Not Working

As has been evident since the earliest forms of combat, exclusively conducting one method or way of war is rarely effective in the long term. Sustained victory requires an adaptable force that understands and adjusts to changing political, social and economic landscapes. This force does not need to be drawn only from national militaries, or provided by the UN or so-called “coalitions of the willing.” PSCs have been used effectively in the past to stop civil wars and to bring parties to the table in moves toward peace. Successful PSCs understood the physical terrain as well as the human terrain, something Erik Prince claims his warriors know from their years of experience in wars in Iraq, Afghanistan and other conflicts around the world. Where U.S. troops rotate every year to eighteen months, Prince says that if given the chance his forces will be there over the long term, and see the war to its conclusion. He contends that consistency of personnel and experience will make all the difference. In contrast, our current model of rotating soldiers (and leadership: seventeen commanders in sixteen years) through Afghanistan has not worked.

A Baseline for Success

There is historical precedent for the successful use of PSCs to end conflict. In the 1990s, two companies temporarily halted civil wars in Sierra Leone and Angola: Executive Outcomes, led by Eeben Barlow; and Sandline, helmed by Tim Spicer. Both former soldiers, the two men also understood Africans—how they lived and how they fought. Comprised almost entirely of former special-forces soldiers, the two companies were extremely well-trained in combat and the use of force. This benefited them when they needed to protect villages or assist the government troops in driving rebels from villages and towns. They were also adept at working with the population. Many reports credit EO and Sandline for saving lives; some add that the PSCs’ soldiers were hailed as heroes and welcomed by the villagers when they made their way through towns. Their integration of capability, training and understanding of local cultures was integral to the cessation of the conflicts. Once they had accomplished their contracted mission, on budget, they turned the reins of control back to the now-stable governments under UN supervision . . . and things quickly fell apart again.

Erik Prince wants to repeat the successes of both Barlow and Spicer—but for the long term. Harnessing the strengths of each force to work together toward the common goal of ending the war in Afghanistan could reap huge rewards. Had there been a consistency of effort and effective integration among state forces, the UN and PSCs, failures in places like Angola, Sierra Leone, Rwanda and Darfur may never have reached such epic and catastrophic proportions.

There is no question that PSCs’ motive will continue to be what it has always been: profit. But this may not necessarily be a bad thing. Profit is incentive to do a job right, and as long as strict and proper accountability mechanisms are in place, contracts are upheld. PSC executives make no excuses for the fact that they work for money; this does not automatically make them mercenaries, and working for financial gain does not mean that they have no integrity or loyalty, or sense of right and wrong. They would only be mercenaries if they were not hired by a state that is a party to the conflict. In the case Erik Prince makes, his specially trained operators would be working not only for the Afghans, but under U.S. supervision—both parties to the war in Afghanistan.

PSC personnel assuming a role where previously there were U.S. soldiers does not ameliorate or, worse, negate the responsibility of the state and the international community to exercise control. In fact, most PSCs welcome clear legal structure and guidance. There are numerous international and U.S. mechanisms by which PSCs can be held accountable—they just have to be used. PSCs need to be contracted by legitimate states, and they must fulfil those contracts to continue to gain contracts; otherwise, they have a tough time getting future work. Can a PSC take over an entire war? Not just yet. Their corporate nature restricts them from this level of participation.

But they do not claim to be able to carry out the full spectrum of foreign-policy implementation and execution, from beginning to end, of an entire conflict. One of the biggest contentions regarding PSCs is that their actions, especially with regard to combat, remove the monopoly of force held by the state. The use of PSCs does not challenge the Weberian notion that the use of violence and physical force is exclusively within the domain of the state. The monopoly of force remains with the state as long as the state is controlling the force used. This is what Erik Prince is proposing—his forces under Afghan control, paid for with U.S. tax dollars—and he claims he can save U.S. taxpayers $35 billion.

So, can it work? Not as advertised. What can work is a hybridized force: one that uses many of the effective tools of the U.S. military, but with the experienced operators and staying power that a PSC can offer, under Afghan and U.S. control. No more turning over critical personnel in revolving-door fashion. The efficiencies and long-term effectiveness of privatization can be realized, but the integration of PSCs into the fight is the United States’ responsibility, incorporating all the mechanisms of proper contract oversight. Without the right integration, without clear and unwavering commitment, it will not work.

As General Ian Douglas, a former UN mission commander in Sierra Leone, put it, “In a perfect world, we wouldn’t need them or want them . . . but the world isn’t perfect.”

Cmdr. Daniel G. Straub (U.S. Navy) is a Senior Military Fellow at Center for a New American Security and holds a PhD in Security Studies from Naval Postgraduate School. While at NPS his research focused on non-traditional uses of Private Security Companies. His views are his own and do not represent those of any part of the U.S. government.