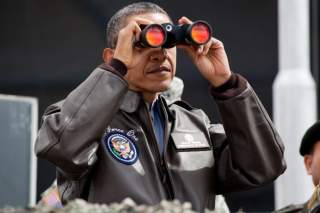 One (admittedly American-centric) history of the Cold War is that Democrats did stupid sh*t and Republicans cleaned up after them. Whether it was Korea, Vietnam or Jimmy Carter, Republican administrations frequently found themselves fixing the messes of their Democratic predecessors.

The pattern of Democrats doing stupid stuff and Republicans cleaning up after them has largely been absent in the post-Cold War era. This may be changing.

In his new book, The Obama Doctrine: American Grand Strategy Today, Colin Dueck not only argues that Obama’s foreign policy has been a disaster for the United States, but also outlines a Republican grand strategy to fix America’s foreign affairs.

The Obama Doctrine is almost two books in one. In the first half, Dueck puts forth a relentless critique of Obama’s foreign policy, the gist of which he has outlined on The National Interest before. As Dueck writes in The Obama Doctrine, the “most distinctive and consistent emphasis” of Obama’s foreign policy “is on U.S. retrenchment and international accommodation in order to focus on progressive policy legacies at home.”

This strategy, Dueck contends, has largely prevented global affairs from impeding on Obama’s ability to implement his liberal domestic agenda, which he argues president has been fairly successful at passing. Moreover, he acknowledges that Obama has had some notable successes abroad, including killing bin Laden and using drone strikes to keep al-Qaeda on the run.

Nonetheless, Dueck argues that Obama’s foreign policy successes have been “more modest, uneven, and episodic” than the president would have you believe. He also points out that most of these successes have come “by embracing more hard-line strategies of deterrence, containment, or even (in the case of al-Qaeda) rollback.”

In general, Dueck concludes that Obama’s foreign policy has been a failure, the consequences of which America is only beginning to feel. “In reality,” he writes, “Obama’s primary and overarching emphasis on strategic retrenchment, international accommodation, and domestic priorities has allowed multiple security threats to germinate overseas in ways that already hold very dangerous consequences for American interests.”

Dueck sees little reason to believe that Obama will begin correcting his foreign policy mistakes during his remaining years in office. For one thing, as noted above, one of the central objectives of the Obama doctrine was to prevent international affairs from encroaching on the president’s ability to advance his progressive domestic policies. “From his particular perspective [then], the Obama doctrine has been a striking success.”

More to the point, Dueck notes that “political psychology and historical example” have both shown that “most presidents tend to keep operating on inbuilt policy assumptions, even when contrary evidence piles up.” This tendency is particularly prevalent in “highly educated, self-confident, and intelligent people with certain core ideological convictions—a description that certainly fits the current president.” Obama, Dueck concludes, “is therefore particularly unlikely to admit or even perceive that a foreign policy based upon faulty international assumptions is failing or has failed.”

It will thus be up to Obama’s successor to save U.S. foreign policy. The second part of The Obama Doctrine provides a blueprint for how a Republican administration can go about doing this.

In fact, much of the Tea Party— both its leaders and the grassroots—fall within Dueck’s second camp, conservative nationalists. Similar to what Walter Russell Mead termed the “Jacksonian” tradition in American foreign policy, Dueck defines conservative nationalists as supporting a strong U.S. military, being conscious of concrete threats against the United States, and being willing to use the military to combat those threats.

At the same time, conservative nationalists have little patience for the “liberal internationalist tradition,” which they view as “naive, wasteful, unlikely to earn foreign gratitude, and threatening to U.S. national sovereignty.” Put differently, “conservative nationalists are comfortable with the military aspects of U.S. foreign policy activism…. [but] they are profoundly uncomfortable with the nonmilitary aspects of U.S. internationalism.”

While they have lost some of their previous dominance, Dueck assesses that conservative internationalists “typically make up at least a third and sometimes a solid majority of voters inside the GOP,” depending on the issue. As such, which foreign policy vision the GOP ultimately adopts will come down to which two camps can align themselves together. In this regard, Dueck contends that “the GOP’s nationalists hold the trump card; they can determine which way the Republican Party pivots on foreign policy, if they choose to do so.”

Drawing on his previous book, Hardline, Dueck also contends that the Republican Party’s 2016 presidential nominee will have significant leeway in charting the GOP’s future foreign policy. For his part, Dueck recommends that “a certain kind of Jacksonian internationalism could work well for Republicans in the 2016 general election.” Drawing on the foreign policy of Ronald Reagan, he calls such a policy “Conservative American Realism.”

By “strategies of pressure,” Dueck means “reviving the art of deterrence and coercive diplomacy.” To do this successfully, “the United States should build upon rather than erode its existing forward presence, and apply a wider variety of policy tools than it currently does to pressure, contain and frustrate its leading challengers overseas through robust hybrid strategies.” However, the specific strategies of pressure used would differ depending on the adversary the United States was seeking to deal with. In each case, however, “the aim should be to impose costs, intensify pressure, and gain leverage against these adversaries in regionally differentiated ways.”

Others have criticized Conservative American Realism for lacking specific details about defense procurement plans. This seems unfair as it goes beyond the scope of what Dueck is seeking to outline.

A perhaps more credible criticism of Conservative American Realism is that it is not a radical break with current American foreign policy. To be sure, there are substantial differences between the Obama administration’s foreign policy and Dueck’s proposed plan, particularly in the latter’s emphasis of sticks and its unabashed support for sustaining American primacy. Still, there would be notable continuities particularly with where the Obama administration appears headed as it strengthens its posture towards countries like Russia and China.

While some in the GOP will recoil at the thought of having any similarities with the Obama administration, these continuities are a strength of Conservative American Realism, not a weakness. As Henry Kissinger once noted of U.S. foreign policy, “Emotional slogans, unleavened by a concept of the national interest, had caused us to oscillate between excesses of isolation and overextension” and “this American volatility unsettled the international equilibrium and those who relied on us.”