Here's How to Save the Minsk II Agreement 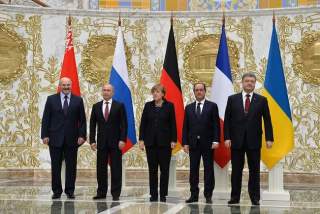 As tensions once again increase in eastern Ukraine, western leaders look for the Minsk II protocol to be carried out as a solution. Unfortunately, due to inherent structural flaws of the agreement, this has proven difficult. Without any constructive progress, there is great trepidation that this current framework will collapse, just as the September 2014 Minsk protocol broke down.

Since the Minsk II protocol was signed on February 15, 2015 the United States has regarded it as the key to resolving the conflict in the Donbas, a region of Ukraine which includes Donetsk and Lugansk. The agreement was negotiated at length by the “Normandy Four”—leaders of Ukraine, Russia, France, and Germany—but its signatories held far less diplomatic clout. They included Organization for Security and Co-operation in Europe (OSCE) Representative Heidi Tagliavini, former president of Ukraine Leonid Kuchma, Russian Ambassador to Ukraine Mikhail Zurabov, and representatives Alexander Zakharchenko and Igor Plotnitsky, leaders of Donetsk and Lugansk respectively. Minsk II covers a broad variety of issues, from ceasefire procedures, to local elections, to constitutional reform. Although it bears many of the same hallmarks of the original Minsk I protocol of September 2014, it was drafted under significantly different conditions on the battlefield.

The original Minsk protocol collapsed primarily because it did not give the separatists any means to achieve their objectives. While it promised local elections within the Donetsk and Lugansk regions, the agreement failed to give the separatists any real authority over the border with Russia or a say in Ukraine’s alignment with NATO. The January 2015 offensive that followed claimed the transportation hub Debaltseve and moved separatist forces to the port city Mariupol. The original Minsk protocol collapsed, with the new territory allowing the Russian-backed separatists significantly more influence during the new round of negotiations in February. By then, President Poroshenko had few options but to accept the Minsk II protocol and the $17.5 billion aid package offered by the IMF in hope of its success.

Five months later, implementation remains a challenge. The ambiguous language has allowed for different interpretations of key points, including constitutional reform and government decentralization in Ukraine. The agreement optimistically calls for revisions in the Ukrainian Constitution by the end of the year. But, at the moment, negotiations are at a standstill with each side claiming violations of the Minsk II protocol. Trilateral Contact Group meetings continued to take place in Minsk as recently as this week to discuss the implementation process, with little to no success.

In their constitutional proposals of May 12, the separatist leaders of Donetsk and Lugansk demanded more power as part of the decentralization process. This included authority over a regional police force, the judiciary system, natural resources, regional and international borders, and the ability to impose checks on the central government in Kiev, the Verkhovna Rada. As part of their constitutional amendments, they included a stipulation that would require Ukraine to remain neutral and non-aligned, effectively eliminating the possibility of NATO membership. Should this plan be accepted as constitutional reform, Russia would gain the security it seeks in the non-alignment of its neighbor and indirect influence over the central government, as well as reduced western sanctions and support for the Donbas.

Unsurprisingly, Kiev has a very different perspective on decentralization. Poroshenko has repeatedly vetoed the amendments proposed by representatives of Donetsk and Lugansk. Far from allowing the Donbas to make foreign policy decisions and control international borders, the government prefers to give the regions greater power on cultural and regional development, including language, transportation, infrastructure, and education. Most authority, particularly over the border, would stay with the Verkhovna Rada. Only smaller responsibilities would be transferred to local authorities to promote efficiency and theoretically reduce corruption.

The challenge of amending Ukraine’s Constitution lies not only in the negotiations between the Donbas and the Verkhovna Rada, but in the details of the Minsk II protocol. Both parties can confidently say that their demands are in keeping with the protocol’s definition of decentralization, thus neither party will concede. The text of Minsk II protocol reads:

Thus, it is no surprise that implementation has been such a challenge. The protocol is intentionally ambiguous because neither side could agree on terms. It gives no clarity on questions of how these constitutional amendments are to be decided upon or who the Verkhovna Rada is required to coordinate with. These details, left open-ended, can be freely interpreted by Kiev, just as the terms of decentralization are for the Donbas. With this in mind, western leaders should occupy themselves with developing solutions that do not resemble unilateral surrender for Kiev or Moscow, rather than expressions of shock or disappointment at the agreement’s so-far unfulfilled status.

Last month, U.S. Ambassador to the United Nations Samantha Power spoke at a Security Council Meeting on Ukraine, stating that “the consensus here, and in the international community, remains that Minsk’s implementation is the only way out of this deadly conflict.” Yet this approach cannot succeed until a more explicit definition of decentralization is established within the Minsk II protocol. If the Verkhovna Rada and the Donbas cannot reach a consensus that allows each party to achieve its interests, or at least save face domestically, the conflict will continue to escalate, as it did after the original Minsk agreement failed.

In February, Angela Merkel advised that she “[could not] imagine any situation in which improved equipment for the Ukrainian army [would lead] to President Putin being so impressed that he believes he will lose militarily.” Seeing a neutral, non-aligned Ukraine as a crucial security interest, Russia is not likely to capitulate. Preventing NATO membership is Russia’s red line. Anything less than this would be considered a surrender—a domestic failure for President Putin that would add insult to the injury of economic sanctions.

For Kiev too, the Donbas’s proposed terms of decentralization pose a real threat to the legitimacy of the central government. It leaves the government in a position akin to surrender, giving unprecedented authority to a group regarded as an enemy of the state. However, a renewed conflict in the Donbas will not position Kiev to leverage more control over the region. This year’s January offensive has proven that it is likely to do the exact opposite.

If the Verkhovna Rada continues to deny the separatists an opportunity to achieve their objectives, the Minsk II protocol is headed towards failure. In that event, the conflict will inevitably be even more difficult to contain than it was in September or February. Western leaders will then face providing substantial military support for Ukraine, or idly watching the conflict unfold.  While some within NATO and the United States government are ready and willing to intervene militarily, that consensus would be difficult to achieve and ultimately incur the latter option. It is imperative then, that western leaders focus not on demanding the implementation of Minsk II, but rather on using its framework to complete further negotiations, which should have occurred in February. Until the details can be agreed upon, insisting that either side subscribe to the current protocol is tantamount to asking for a unilateral surrender. The Minsk II protocol should be regarded as an early step toward resolution, not a final step.

Julia Embody is a Program Associate at the Center for the National Interest.