Here's How to Save the U.S.-Turkey Alliance 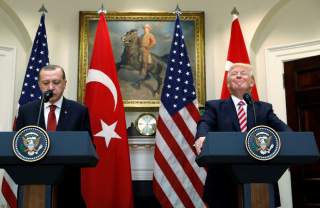 After decades of cooperation, the alliance between the United States and the Republic of Turkey appears at risk of permanent fracture. Disagreements over Syria, Turkish president Recep Tayyip Erdoğan’s creeping authoritarianism, and Turkey’s decision to purchase the S-400 anti-aircraft missile system from Russia despite expressed objections from the United States have caused this once-fruitful relationship to turn toxic. Last month the Trump administration levied significant steel and aluminum tariffs against Turkey only days after it imposed sanctions on them for their continued imprisonment of American pastor Andrew Brunson on spurious charges of espionage. Just last week, senior Cato Institute fellow Doug Bandow argued in The National Interest that it is time to bury the American-Turkish alliance once and for all.

While America’s relations with Turkey have certainly suffered of late, they are not yet beyond saving. Erdoğan’s recent electoral victory, the fragile state of Turkey’s economy, and the decreasing need for American involvement in the fight against Islamic State create a real opportunity for both sides to meaningfully repair their alliance before further deterioration occurs. While both Turkey and the United States have legitimate grievances with one another, the U.S.-Turkey alliance remains one worth attempting to preserve.

Turkey’s long and productive relationship with the United States has shown it can recover from a more serious rift than the one it currently faces. Turkey joined the North Atlantic Treaty Organization in 1952 due to fears of Soviet encroachment and served as an important geopolitical ally for the Western bloc. However, this partnership was severely tested in 1975 when the United States enacted an arms embargo against Turkey in response to its invasion of Cyprus, prompting Turkey to deny America access to nearly all military bases in the country. After three years of high tensions, the Carter administration acted to remove the embargo, recognizing that the benefits of America’s alliance with Turkey were substantial enough to justify an honest attempt at repairing the fractured diplomatic relationship.

Forty years later, Turkey and the United States once again find themselves at odds. Turkey was long viewed as a shining example of democracy and secularism in the Middle East, but it has become increasingly authoritarian under Erdoğan’s rule, resulting in the consolidation of executive power, the weakening of civil society, and the targeting of journalists, activists, and Erdoğan’s political opponents. Turkey has also arrested many Americans, including the aforementioned Andrew Brunson, in hopes that they could pressure the United States to extradite Fethullah Gulen, a Pennsylvania-based Turkish religious leader who Erdoğan blames for organizing an attempted coup against him in the summer of 2016. Instead, America responded to the arrest of U.S. consulate employee Metin Topuz by, “immediately suspending the issuance of non-immigrant visas in Turkey,” resulting in a diplomatic crisis.

However, Syria stands as arguably the most significant point of divergence between the two allies. In the fight against the Islamic State, America had armed and supported the People's Protection Units (YPG), a Syrian Kurdish militia that composes the bulk of the Syrian Democratic Forces. The YPG was invaluable as a ground force against ISIS, but their alleged support for the Kurdistan Workers' Party (PKK), a Kurdish separatist group that has warred with Turkey for forty years, aroused Turkish fears of a pan-Kurdish military force that could threaten Turkey's southern border. Turkey views American support for the Kurds as support for an autonomous Kurdish region in Syria that could threaten Turkey's territorial integrity and control over its Kurdish population, while America sees Turkey's attacks against the YPG as counterproductive in the broader fight against ISIS.

Turkey has certainly become an irritant to American foreign policy, but it remains an extremely important military ally. Turkey has the second largest military among all NATO members and is home to the permanent headquarters for NATO land forces, as well as critical components of NATO's early-warning missile radar system. The United States also has a standing presence at Turkey's Incirlik Airbase (utilized frequently in the fight against ISIS) which hosts American tactical nuclear weapons and has allowed America to project military power into the Middle East while offering protection for regional allies. Turkey's growing authoritarianism is undoubtedly a cause for concern, but America's partnerships with Saudi Arabia, Egypt, and Bahrain prove that America can begrudgingly abide by such alliances when they support America's broader goals. Turkey's military prowess and strategic geographic location as a bridge between Europe and Asia make it an invaluable asset to both America and NATO's defense strategy, and preserving this asset is certainly in America's national interest.

Additionally, an American divorce from Turkey would likely solidify the burgeoning friendship between Turkey and Russia. Turkey’s desire to eschew a missile defense system integrated into NATO in favor of Russia’s S-400 raises the concern that Russia could acquire data about how the stealth capabilities American-made F-35 matchup against the Russian system. It also raises the worry that Turkey's commitment to NATO may be waning. After all, Russia seeks to undermine the strength and influence of NATO in Eastern Europe while protecting Russian presence and influence in the Middle East. Moscow knows that supplanting the United States as the primary guarantor of Turkish security would do much to accomplish these goals.

Still, it is in Turkey’s interest to repair its relationship with the United States. Turkey’s economy is on the brink of collapse, and with Western nations accounting for nearly two-thirds of its trade, now would be a particularly inopportune time for Turkey to suffer a further loss of relations with its NATO partners. Erdoğan’s defiance in the face of Trump’s tariffs shows that the disputes over Syria and the Kurds are currently more important to him than protecting the Turkish economy. However, considering Erdoğan’s shortsighted policies are partially responsible for the economic crisis, he may be willing to walk his relations with the West back from the brink if given a mutually beneficial way to do so in the interest of eliminating a threat that could undermine his credibility with the Turkish public.

A simple first step towards nudging Erdoğan down that path is to appoint an Ambassador to Turkey, a position that has remained vacant since 2017. I previously argued that the absence of an American Ambassador to Turkey makes it harder to create a meaningful framework for settling existing disputes, and the fact that America has not filled this vacancy after almost a year tells Turkey that repairing their alliance is not one of America’s priorities. America’s concerns regarding the S-400 system, Erdoğan’s authoritarianism, and the jailing of American citizens are important issues worth pursuing, and America is more likely to reach favorable settlements on each of them if it appears fully committed to the diplomatic process than it will by imposing punitive and counterproductive tariffs.

The United States must also address the Kurdish and Syrian questions from which the root of their poor relations with Turkey stem. The destruction of the ISIS caliphate in Syria has created an opportunity for Turkey and America to re-negotiate their relationships with the YPG. While the United States must continue promoting dialogue and cooperation with Syrian Kurdish groups, it should also accelerate the process of reclaiming the American weapons it gave to the YPG. Moreover, America should condition future support for the YPG on the group cutting ties with the PKK. Also, Washington could offer to deepen its existing intelligence sharing cooperation with Turkey to help stop the flow of money and weapons to the PKK across Syria's porous borders. Because ISIS can no longer acquire or hold territory in Syria, the United States no longer needs to treat the YPG as a proxy force to liberate occupied areas. This means Washington should work to show Turkey that American support for the protection of Syrian Kurds does not extend to its support for an independent Kurdistan or a YPG/PKK alliance.

The United States can further show its commitment to Turkey by facilitating the reopening of peace talks between Ankara and the PKK, which collapsed in 2015 due to Turkey’s involvement in Syria. Erdoğan effectively used his offensive against the PKK to rally public support for his re-election bid this summer but may be more amenable in the post-election environment if he observes the United States pressuring the PKK into resuming the ceasefire that ended when the prior negotiations did. Peace talks with the PKK would be long, difficult, and provide no assurances of success, but showing that America is willing to stand beside Turkey through the duration of the process would certainly improve the likelihood of progress being made.

The United States committed to repairing its relationship with Turkey in 1978 and must be willing to make that same commitment in 2018. The process of preserving the U.S.-Turkey alliance will be complex and will require deft and careful diplomacy. The damage done may ultimately be unable to fully heal, especially if Erdoğan proves unwilling to compromise even when faced with America’s renewed diplomatic vigor. However, America’s alliance with Turkey is too beneficial for the United States to bury without first making every effort to resuscitate it.