Here's How the US Can Defeat ISIS 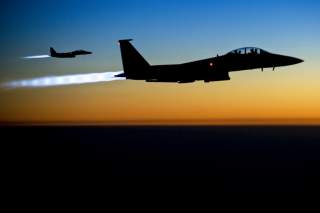 Since directly confronting the ISIS threat in August, the United States has taken several measures to ramp up its actions against the terrorist group. Internationally, the U.S. successfully assembled a large coalition of nearly forty nations (albeit, strange bedfellows) to combat ISIS. In Iraq, the U.S. has committed thousands of military advisors to train local security forces and bolster the Iraqi Army. At home, the U.S. Senate Committee on Foreign Relations authorized earlier this month the use of military force against ISIS, limited to three years and without the use of ground troops for combat operations.

In the midst of carrying out these military strategies for “ultimately destroying” ISIS, what is missing from the equation is a long-term political and economic game plan. While the Obama Administration has acknowledged that ISIS is a political problem, and was right to condition U.S. airstrikes on achieving a more inclusive government in Baghdad, it will take more than air strikes and elections to solve Iraq’s political struggles.

The first step is to acknowledge the true strength of America’s political capital in Iraq.  Indeed, the U.S. has tremendous leverage across Iraq’s various political, ethnic and religious factions, which can strengthen the nation’s renewed efforts to building Iraq’s civil society. Even the Anbar Governorate, a Sunni stronghold, has officially requested assistance from the United States.

As one concrete example, direct cooperation between the Sunnis, U.S. Special Envoy John Allen and the American Embassy in Iraq resulted in the “Arab Conference to Fight Extremism and Terrorism" in Erbil on December 18. There, Sunni tribal leaders and local figures met for the first time to develop a plan for fighting ISIS. The conference was also reportedly attended by the Kurdistan Regional Government, Iraqi government officials, and participants from the EU, UN, the Arab League, and diplomatic missions to Iraq. Moving forward from this meeting, it is crucial that Sunni participants maintain trust in America’s commitment, otherwise ISIS will continue exploit Sunni areas and constituencies.

Despite positive advancements such as these, the task of long-term political engagement in Iraq is daunting. Yet success in these endeavors has been achieved before. For a model of what can happen through sustained political, diplomatic and economic engagement, we should look no further than the autonomous Kurdistan region in Iraq.

Many see the democratic and stable Kurdistan as an exception in its neighborhood, rather than a model. As Iraq’s military forces prove shaky, Syria’s civil war rages on, and Iran, Saudi Arabia and Turkey jostle for regional balance of power supremacy, it is miraculous that the Kurdistan region remains relatively peaceful and prosperous. One might say that it has never been stronger – international investment continues to pour in from oil conglomerates such as Exxon and Total and regional construction giants including Emmar, which built the world’s tallest structure, the Khalifa Tower, in Dubai.

Over the last decade, it has seen its GDP per capita rise from $800 to $5600. The President of the Kurdistan region of Iraq, Masoud Barzani, was even nominated as Runner-Up in Time Magazine’s Person of the Year for 2014.

The Kurdistan Regional Government also governs with strong degrees of ethnic and religious tolerance. This peace holds despite hosting refugees from the current ISIS crisis, as well as over 1.4 million IDPs from across Iraq since the 2003 war. The capital city of Erbil itself is the largest host of Arab IDPs from Fallujah, Baghdad and Tikrit. And yet, it remains peaceful.

But Kurdistan has not always been this tranquil, with its capital cities serving as havens for international business and American government workers. Until 1991, Kurdistan was at the center of Iraq’s turmoil. This time harkens back to a dark era in which Saddam Hussein carried out countless human rights atrocities in an attempt to exterminate the Kurdish people living in Kurdistan Iraq. These atrocities include Saddam’s use of chemical weapon in Halabjah in 1987, and the 1988 Anfal campaign, in which Saddam carried out bombings and mass executions of men, women and children, killing upwards of 180,000 Kurdish civilians.

Following the first Gulf War, the United States, authorized by a U.N. resolution, maintained a no-fly zone to stop the killing of Kurdish civilians. Still, the hardship continued. The Kurds were then subjected to a double embargo: one imposed by the U.N. on Iraq and one imposed by Saddam Hussein on the provision of fuel, gas, oil and even salaries to the region.

Between 1994 and 1997, conflict raged in Kurdistan after a power sharing arrangement between the two main political parties, the PUK and the KDP, broke down and resulted in civil war. It took President Clinton’s successful mediation – U.S. political intervention -- in 1998 to bring about a formal ceasefire. The subsequent Washington Agreement initiated a strategic revenue and power sharing arrangement between the two parties that holds to this very day. The U.S. also pledged to use military force to protect the Kurds from further aggression by Saddam Hussein.

The Power of Political Engagement and Leadership

Clinton, however, provided more than military support. The Washington Agreement laid the groundwork for the political, institutional and legal pillars of a true democracy. Benefiting from the peace and stability that stemmed from Clinton’s political roadmap, the Kurdistan Parliament built the legal infrastructure for an open market society. The Kurdistan Regional Government enacted liberal policies on gender equality and children’s rights, and today provides near-equal gender education opportunities. In 2012, women accounted for 54 percent of total enrollment in post-secondary technical education, up from 46 percent in 2007. At the university level, women accounted for 50 percent of enrollment in 2012, up from 45 percent in 2007.

Importantly, the Kurdish government welcomed American assistance and the U.S. remained dedicated to building a strong democracy in the region. Between 1998 and 2003, the Kurdish government, working with America’s steadfast commitment and several international NGOs, developed into a true democracy with a strong civil society. Contrast this relationship to that between the U.S. and former Iraq Prime Minister Maliki. America’s increasingly hands-off policy allowed Maliki to drift away from his promises, impose almost authoritarian rule in Iraq, and create the grievances necessary for the rise of groups such as ISIS.

Today, President Barzani leads a credible and inclusive government, which is an increasingly vital partner for the U.S. Indeed, it might be fair to say that the Peshmerga forces are the only effective boots working on the ground to combat ISIS. What once seemed like an intractable conflict is now a thriving success story in the heart of the Middle East, visible through political, military, economic and social measures. This success did not happen overnight, nor would it have happened at all without the reliable leadership of the Kurdistan region and American support.

Similar success is possible elsewhere in Iraq, but only if America moves past its tired mentality on the country. The U.S. must maintain a positive and patient presence, one that embraces realities on the ground and yet remains visionary and optimistic about overcoming Iraq’s persistent problems.

Without sounding trite, a central tenet of U.S. foreign policy has always been to place the nation at the vanguard of progressive movements around the world, especially those aimed at improving long-term stability. The U.S. still has the opportunity to help Iraq move forward – not just in the fight against ISIS, but also in achieving a new political structure that can yield stability, democracy and tolerance. To do this, the U.S. must not shy away from sustained political engagement, nor retreat from its own principles – namely those of freedom and equality, self-determination, free market economy, technological innovation, and robust civil society.

Precisely at a time when U.S. leadership is needed most, the American public has become increasingly isolationist and weary of long-term engagement in conflicts that appear to be out of the nation’s control. While there is strong public support for airstrikes against ISIS, the overwhelming majority of Americans is concerned that U.S. intervention in Iraq and Syria will lead to a long and costly involvement there. Even two-thirds of Americans still believe that the Iraq War was not worth fighting.

Furthermore, the U.S. military is increasingly seen as the primary means not only for defeating ISIS but also for bringing about democratic principles, inclusiveness and tolerance in Iraq. This image is misleading. It portrays inaccurately to the American public and to the international community the primary instruments with which America seeks to promote justice, freedom, opportunity and tolerance in the world. Indeed, American power is not and cannot be defined by military power alone.

While military power is essential to defeating ISIS, lasting stability must be pursued through political guidance, economic support and developmental resources. Reengaging in another state building effort in Iraq is daunting to many Americans. Yet in order to achieve real success, defeating ISIS is only a first step. Success in Iraq must not be thought of as putting out fires and keeping conflict simmering just below the surface. Rather, success must be thought of as a long-standing achievement, manifested in sustainable, inclusive and tolerant political institutions. Getting it right will save American lives and resources for decades to come.