Here's How to Update the U.S. Refugee Admissions Program 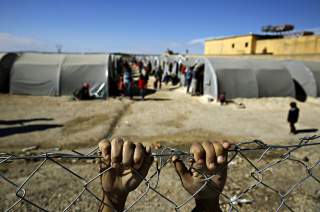 The Supreme Court has given a temporary green light to President Donald Trump’s travel and refugee “ban.” It will stay in effect until the court can consider the case in the fall.

While much ink has been spilled on the legal issues at play in this case, far too little has been spent actually looking at U.S. refugee policy. Here, there are important questions to be answered. What does the current system look like? Does it serve U.S. interests? What are its flaws, and how can it be improved?

A new report from the Heritage Foundation takes a hard look at each aspect of the U.S. refugee admission program. It concludes that although the program currently advances U.S. interests, it must be reformed to ensure that it continues to do so in the future.

On the question of national security, the report found that at least sixty-one individuals who came to the U.S. as refugees engaged in some type of Islamist terrorist activities between FY 2002 and FY 2016. Yet the report assesses the security threat posed by refugees as small. That’s because during the same time period, the United States admitted 279,000 Muslim refugees.

Of the sixty-one refugee terrorists, most were homegrown. That is, they radicalized after they came to the United States. More specifically, refugees who came to the U.S. as children (the so-called 1.5 generation because they spent their formative years split between the United States and abroad) emerged as the greatest source of refugee terrorists.

While there have been a few high profile cases of radicalized terrorists slipping through the vetting system, refugees radicalizing in the United States pose the larger threat. Certainly it would be useful to improve the vetting system—such as allowing the Department of Homeland Security’s refugee interviewers to gain greater experience by specializing in a certain region of the world. But the report suggests that terrorism prevention efforts should focus on stressing assimilation and defeating radicalization here in the homeland.

In terms of economic impact, the report found that refugees can have some positive economic benefit, but this does not necessarily lead to a growth in the average American’s income. Furthermore, the fiscal costs of refugees are often significant. While refugees from different countries have had different outcomes, many refugees come to the United States with literally nothing—no money, little knowledge of English and few skills that can be applied in an advanced economy. As a result, most will be consuming more in tax dollars than they contribute.

These problems can be mitigated by adopting many of the recommendations made by conservatives to create an opportunity society: lowering unnecessary government barriers to employment, ensuring that anti-poverty programs do not create a long-term welfare trap, and engaging civil society and private individuals to help refugees succeed.

The report also identified several other problems in the refugee admissions program that need fixing. For example, anti-fraud efforts should be beefed up by expanded use of DNA testing and collaborating with UN systems. The United States also needs better long-term data on how refugees are faring in their new lives.

The report also recommends that Congress get more involved. Specifically, it should play a more substantial role in setting the quota for annual admission of refugees. While the executive branch should have some ability to set refugee quotas within historical bounds, the president should have to seek congressional approval in order to substantially increase or decrease refugee admissions.

Despite these challenges and the serious need for fixes, the U.S. refugee program continues to advance national interests. It asserts American leadership, serves as an important public diplomacy tool, helps partners and allies in a tangible way and rescues some of the world’s most vulnerable people.

To be clear: the United States does not have a responsibility to take in any person who wants to come to the America.; there is no global right to migrate; nor is it in the U.S.’s interests to accept such a norm. But every year the U.S. Refugee Admission Program helps thousands of the world’s most vulnerable people—men, women and children who are subject to persecution based on their race, religion or political beliefs.

Emotions run high on the issue of refugee admissions. But U.S. policies here, as well as elsewhere, should be based on sound information and clear thinking. As a conservative think tank, The Heritage Foundation also believes that such policies should advance U.S. security, strengthen civil society, and limit the size and spending of government.

On the whole, the U.S. refugee admission program advances these principles and American interests. Yes, reform is necessary, but we shouldn’t throw the baby out with the bathwater.

David Inserra is a policy analyst specializing in homeland- and cyber-security issues, as well as a coauthor of the new Heritage Foundation report “The U.S. Refugee Admissions Program: A Roadmap for Reform.”

Image: A Kurdish refugee boy from the Syrian town of Kobani holds onto a fence that surrounds a refugee camp in the border town of Suruc, Sanliurfa province November 3, 2014. REUTERS/Yannis Behrakis.