Here's the Playbook for Getting U.S.-Russian Cooperation Back On Track 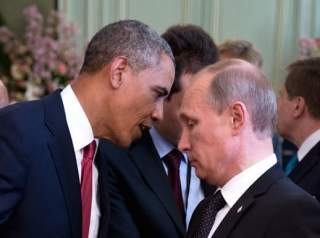 It was no coincidence that Vladimir Putin went from being an outlier at last year’s G-20 meeting to being the man to see at the recent G-20 conclave in Turkey. From the refugee crisis rippling through the EU to new waves of terrorism, from the outbreak of multilayered ethnic and religious conflict in Syria to the unraveling of the state system in the Middle East, Moscow’s activism places it at the epicenter of all these crises.

Yet this new status comes at a moment when the strategic and political gulf between Russia and the West is reminiscent of the Cold War. Against this backdrop, the old adage “don’t cut off your nose to spite your face” would seem to apply to U.S. and Western reluctance to work with Russia in battling ISIS and reducing chaos in the Middle East. If we want to see results, in this polycentric world, we may not have the freedom we once had to choose our partners.

None of the so-called “great powers,” including the U.S., is able to call the shots anymore, and there are competing visions of what kind of new world order should exist. The supreme irony is that the growing disorder in the international system comes at a time when the world is more economically interdependent than ever, and we all share a strong interest in combatting terrorism, nuclear proliferation, climate change and a host of other global challenges.

At root, the very success of globalization—connecting economies, people and nations—is creating wider gaps between the haves and have-nots. And these disparities will only get worse as the emerging technologies favor those at the core, not the periphery, of the world economy.

In parallel with (and perhaps in reaction to) globalization, a trend of nativism and inward-looking nationalism is sweeping across the world from Europe to the Middle East and Far East. The U.S. presidential election campaign is no exception, where Republican presidential candidates and state governors have been outdoing each other, for example, on how to keep out any Syrian refugees.

What’s the solution? Over the last year, the Moscow-based Primakov Institute of World Economy and International Relations (IMEMO), and the Atlantic Council’s Strategic Foresight Initiative have conducted a joint study of global trends without major disagreement on the analysis, especially on four action points:

The sources of instability are not just on the surface between nations, but are deeply rooted in cultures undergoing an immense unraveling. The future of the state and of multiculturalism is in doubt in increasing swathes of the Middle East, starting with four already-failing states: Syria, Iraq, Yemen and Libya. International conflict, real and potential, which had hit historic lows in the past decade, has begun to creep back up due in part to growing bloodshed in the Middle East. The possibility of such conflict between major powers had appeared remote. But now, from the Ukrainian crisis to the South China Sea territorial disputes, it seems, if not probable, at least in the realm of the thinkable.

Just like at the end of the Cold War, we need to think about putting in place mechanisms for defusing potential crises. The recent Turkish downing of the Russian jet on the Syrian border should be a wake-up call of the potential for rapid escalation. Practically any part of the post-Soviet space and surrounding regions, as well as the western part of the Asia-Pacific region and northern part of the Indian Ocean, could become the site of serious competition between major powers. The increasing range and reduced response time of current and emerging non-nuclear offensive weapons systems and their highly automated command-and-control systems heighten the risks of accidents.

Both the West and Russia face critical strategic choices. For its long-term future, the U.S. can’t afford an outmoded worldview shaped by “exceptionalism.” It also can’t just be a Pacific power, even though economic power is shifting there. European policy can’t be just about securing its neighborhood. The EU is learning the hard way that the rest of the world does not share its postmodern vision and it is impossible to shield itself from the slings and arrows of external global turmoil. Nor can Russia be centered just on the former Soviet states, including forging an Eurasian condominium with China.

Inclusion in broader transatlantic and transpacific economic and security architectures will remain critically important for all three powers. And there is clearly a mutual interest among the major powers—U.S., Russia, EU, China, Japan—in developing peaceful solutions to the vicious cauldron of conflicts in the greater Middle East, the swath from North Africa to Pakistan.

In moving from primacy to first among equals (or as we used to say “primus inter pares”), the U.S. needs to commit to an inclusive international system to reflect the new weight of emerging powers and their aspiration for a stronger sovereign role. In this increasingly post-Western world, traditional Western policies, such as right to protect (R2P) and democracy promotion, are sparking strong counteraction from not just authoritarian states but also many emerging democracies who worry about maintaining their national sovereignty. Finding ways to surmount differences in interests and values could bolster U.S. power in ways that seeking to remain the world’s sole rulemaker will not. It is time to recognize that power is situational, and that problem solving requires mobilizing all who are willing and able to bring something to the table.

Failing to embrace the new realities leads to far more dangerous alternatives. The worst outcome would be a new bipolarity: the emergence of a grouping around China and Russia against the United States, with its European and Asian allies. In such a world, U.S. capacity would be stretched to the breaking point. Washington couldn’t manage an escalation of tensions with Russia and China at a time of increased conflict in the Middle East.

In a new bipolarity, Russia also has to beware not only of confrontation with the West, but also of being drawn into conflicts involving Chinese interests. The worst nightmare would be a scenario where Russia is left on its own. Its global political and economic influence could decline as its relations with the West become confrontational, while China, India and other rapidly developing powers extend their influence in Eurasia.

Mutual exchanges on the forces eroding the foundations of the post–Cold War international system can serve to animate a sense of mutual responsibility, encouraging efforts to develop a new inclusive world order in stages.

As the recent debate over China’s Asian Infrastructure and Investment Bank shows, the international system urgently needs to be modernized to reflect the realities of the global diffusion of power. The IMF’s recent inclusion of the RMB in its Special Drawing Rights (SDR) basket of currencies is a glimpse of the future. If the multilateral finance institutions are not adequately reformed, the oft-discussed idea of an Asian Monetary Fund accompanying the AIIB as an alternative could well be in the cards. In that regard, the current crisis in the Middle East provides an opportunity to forge unprecedented cooperation on a pressing shared interest, despite our principled differences on other issues, as a good first step in forging new patterns of cooperation.