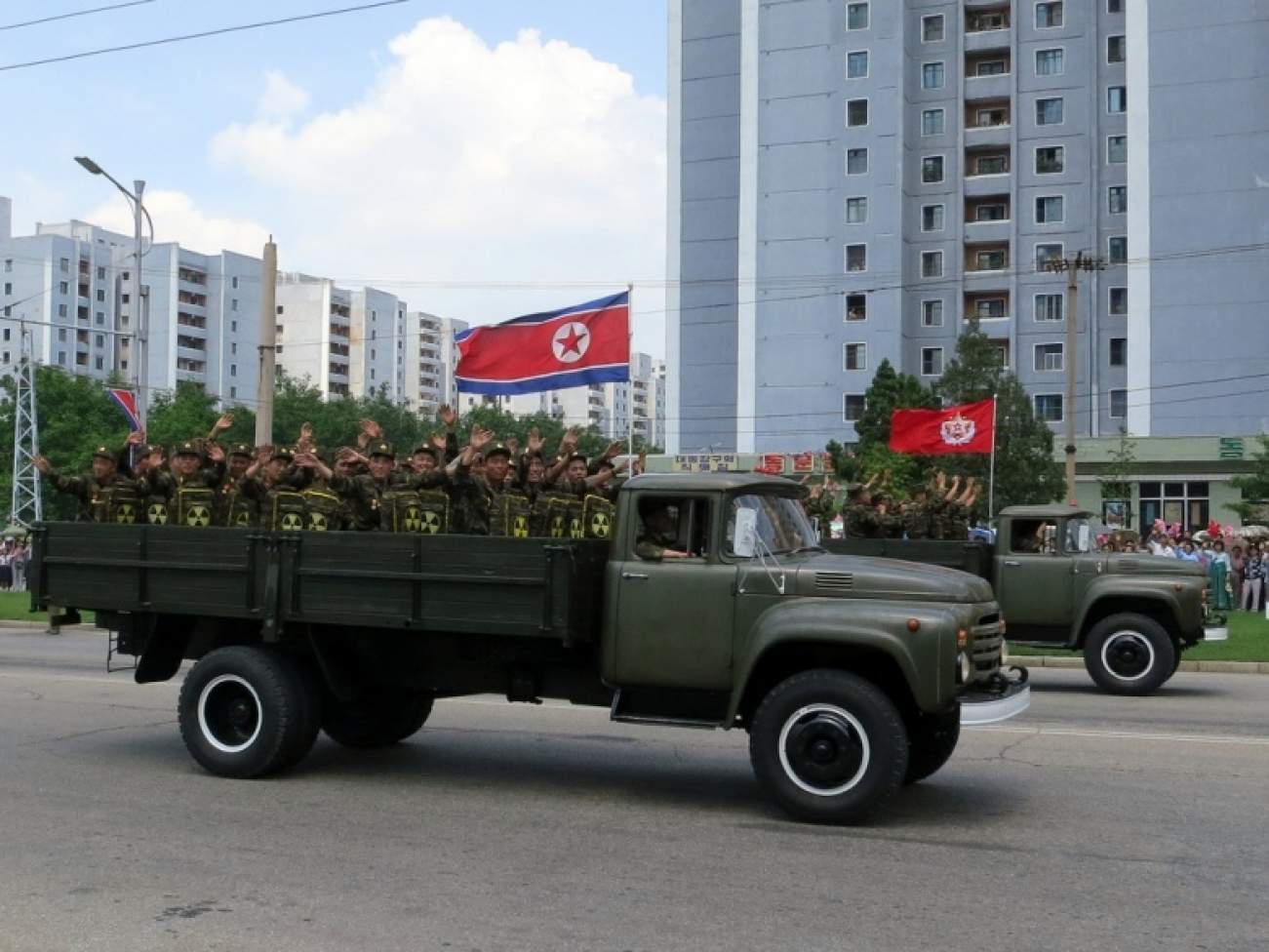 Shenyang, China: North Korea is a major topic of interest in this provincial capital in China’s northeast. The “Hermit Kingdom” is just a couple hours away by car. Pyongyang sends diplomats and students to Shenyang while attempting to stem the flow of refugees. Again the North’s harvest does not look good. Observers warn that another famine may be coming. The first reports of drought appeared earlier this year. The United Nations began worrying about a “huge food deficit” in May. It warned that 70 percent of North Korea’s population faces a food shortage.

A month later the Democratic People’s Republic of Korea claimed that it was experiencing “the worst drought in 100 years.” Pyongyang has been known to exaggerate its problems to encourage outside assistance, but the Food and Agriculture Organization predicted that domestic production may run only half that of last year. UNICEF predicted a serious drought which would cause widespread malnutrition. Three years ago the group concluded that one-quarter of children already were malnourished. Thus, UNICEF argued, disaster threatened: “If we delay until we are certain of crop failures, it may well be too late to save the most vulnerable children.” Visitors affirm significant rural problems. American diplomats stationed in the region give credence to such reports.

Of course, another famine is another grievous embarrassment for a state that is constantly embarrassed. The Kim Jong-il regime ostentatiously announced that it would demonstrate the country’s power and wealth in 2012. The world—and more importantly, the North Korean people—still are waiting.

Far worse, several hundred thousand, and perhaps as many as two million, North Koreans died between 1995 and 1997 from a brutal, extended famine. The North since has been dependent on the generosity of others to feed its people. The so-called Democratic People’s Republic of Korea has been receiving food assistance from the United Nations and other countries and organizations for 20 years.

Despite its celebration of the philosophy of “Juche,” or self-reliance, the DPRK again has begun to bang its tin cup, seeking aid. However, international “fatigue” has set in. The United States long ago stopped giving. This year the UN’s World Food Program collected less than one-fifth of the money which it requested. Total humanitarian aid fell in 2014 over 2013; despite growing need, support for the North remained flat at $21.3 million in the first half of this year.

Nevertheless, the People’s Republic of China remains the North’s most important food supplier. Noted the Congressional Research Service’s Mark Manyin: “food from China is known to enter the North on commercial, concessional, and barter terms, making it difficult to distinguish aid from trade.” The Chinese government almost certainly will continue to stand by its ally. Although assistance has varied over time, Beijing always has ensured the Kim regime’s survival. Academics, scholars, journalists, and individual citizens increasingly criticize the North—during my recent trip I chatted with one social scientist who advocated that China forthrightly penalize Pyongyang. The government also appears to be increasingly frustrated with the DPRK’s behavior. But Beijing is not willing to risk chaos on the peninsula or a united Korea allied with America, or both.

Between 1995 and 2005 Seoul provided nearly $1.2 billion in food and fertilizer alone. The ROK often linked its assistance to North Korean participation in talks, though with little substantive result. Seoul cut off general support after Pyongyang’s military attacks in 2010: aid fell from about a peak of about $400 million in 2007 to a low of around $13 million in 2012.

Still, the South remains willing to restart humanitarian transfers. Lee Joo-seong, chief of the Council for Cooperation with North Korea, advocated that “regardless of political and military issues, sustainable aid should be ensured.” In June Unification Minister Hong Yong-pyo said his government would respond to any request: “If North Korea faces tougher situations, South Korea is willing to provide the necessary support.” He frankly hoped to use assistance for political gain: “I think that this situation can be a chance to promote cooperation.”

Japan has episodically provided food assistance, but support generally has reflected the state of relations, which in recent years remains tainted by the controversy over North Korea’s abduction of Japanese citizens. With the Abe government taking a tougher stance toward the PRC and adopting a more assertive foreign policy, it is unlikely to come to the North’s rescue.

Washington has provided aid in the past—between 1995 and 2005 roughly $1.1 billion worth, about 60 percent of which was food. The rest was energy under the Agreed Framework plus some medical supplies. Since then assistance has been only little and occasional. In 2004 Congress approved the North Korea Human Rights Act, which set new conditions for any American aid.

No doubt, some common people were helped by these transfers, at least after improved monitoring limited illicit diversion. Moreover, the presence of U.S. (and other foreign) aid officials provided at least some contact with the local population. Dorothy Stuehmke, who helped implement U.S. food aid, argued that her presence gave North Koreans “a window on the outside world and perhaps a different perspective of the U.S.”

Little came of such efforts, however. Pyongyang has tended to take the money and if not run, at least ignore its promises. In fact, in early 2012 the North almost immediately violated at least the spirit of a new agreement negotiated with Washington trading aid for nuclear restraint with a new rocket launch. After that, the Obama administration ended support and dropped serious attempts to negotiate with the DPRK. Today the Kim regime is unlikely to abandon its core interests—preserving domestic power and international security—for a little food intended for people regarded as little more than class enemies.

So far the administration has not changed its stance. Explained the State Department’s East Asia-Pacific spokeswoman, Katina Adams: “The United States remains deeply concerned about the well-being of the North Korean people. North Korea has not requested United States assistance, and the U.S. has no plans to provide humanitarian assistance to North Korea at this time.” Pyongyang has said that it doesn’t plan on asking America for help. At this time, anyway.

However, having succeeded in engaging the pariah states of both Cuba and Iran, the Obama administration might decide to make another try with Pyongyang. And the threat of famine offers an obvious excuse for another aid effort.

Of course, no one wants the North Koreans to starve. But famine is a self-inflicted disaster. The North Korean people suffer mightily. The North has socialized its agriculture and used food to reward political loyalty. Moreover, Pyongyang has devoted scarce resources to nukes, other weapons, and luxuries for the nomenklatura that otherwise could be used to purchase food. The first two have cost billions; the second has run hundreds of millions. Yet the deaths of a half million or more people in the late 1990s had no noticeable impact on North Korean policy.

Tempting though it might be to try again, a bad idea it certainly would be. The situation is, as Yogi Berra once said, déjà vu all over again. No matter what promises North Korea makes and agreements North Korea signs, nothing is likely to change. Pyongyang will treat official aid as support for the regime; any resources transferred inevitably will be used to buttress the regime. As J. Peter Pham of James Madison University has noted, “there is no possibility of aid being neutral, much less apolitical. By propping up the pillars of the same government that caused the humanitarian crises in the first place, any aid becomes, however unintentionally, a political choice to reinforce, at least partially, the existing system of oppression.” Thus, U.S. support would increase popular hardship over the long-term.

That is most obviously the case when assistance is directly diverted. Some was transferred to political apparatchiks and the military; other was repackaged and sold on the domestic black market and in China. Even when monitoring has limited if not eliminated such abuses, aid inevitably assisted the regime. Transfers necessarily free up resources for the regime to spend elsewhere. The more support, the less pressure for reform. The possibility of getting such aid also creates an additional incentive for the regime to attempt to manipulate the international community.

Of course, no one should have any illusion that refusing humanitarian assistance is likely to force the regime’s collapse. The Kims always have done whatever they believed to be necessary to maintain power, including allowing mass starvation. But rather than stick Americans with the bill for reinforcing the North Korean regime, Washington should let the North put the burden for regime survival on China.

However, Washington should allow truly private aid (in contrast to funneling U.S. government food through nominally private NGOs, as is common). Such assistance carries no imprimatur of political support. Aid groups more easily can adapt their policy to Pyongyang’s compliance with monitoring conditions; political objectives don’t interfere (at least as obviously) with feeding decisions. In fact, small groups with no evident political agenda have succeeded in working in the North, improving and saving lives without strengthening the regime’s hold on power.

Moreover, the North appears to be less vulnerable to disaster than two decades ago. Although reform has been inadequate, the North now benefits from two decades of spreading markets. Noted Kookmin University’s Andrei Lankov: “Agriculture is much less state-run and much more private than it used to be, and the farmer who work for themselves work better and with greater efficiency.” Indeed, close to a third of agricultural efforts are estimated to be devoted to private production. This year farmers have been mobilized both publicly and privately to increase food production.

Moreover, distribution of goods, including food, increasingly has shifted to private markets. Indeed, that is how many North Koreans survived during the 1990s famine. As the state distribution system broke down, many people turned to the black market for food. Since then the regime has largely tolerated this growing market system. Such a process will help distribute even limited food supplies to people today.

Refusing to provide aid does not mean Washington should not talk with the North. Historically, Pyongyang has been less confrontational while involved in negotiations with other states. More limited objectives, such as limits on missile development, withdrawal of advanced conventional units, and even caps on nuclear capabilities, also might be achievable. The United States should keep its expectations quite low—and not pay anything for mere promises.

North Korea is a continuing tragedy. There is no easy or simple policy guaranteed to end confrontation on the peninsula. In fact, so far almost everything has failed. Including providing government aid to the DPRK. If famine again does strike, the United States and its allies should tell Pyongyang no.