Here's Why Arming Ukraine Would Be a Disaster 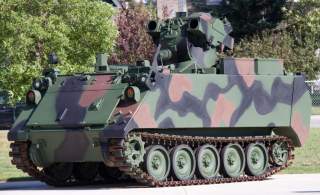 The joint report by the Brookings Institution, the Atlantic Council and the Chicago Council on Global Affairs calling for the United States to arm Ukraine to the tune of $3 billion a year through 2017 provoked a surprisingly strong (and much needed) backlash from several important policy hands in Washington. Within forty-eight hours of the report’s release, well-respected Russia experts from Brookings, the Carnegie Endowment, Kissinger Associates and the Kennan Institute voiced their well-founded objections to the report’s recommendations.

Not that we should expect Capitol Hill to take much notice. Already, Senator John McCain and a bipartisan group of over forty House and Senate legislators have called upon the Obama administration to send military aid to Kiev. At a press conference on Thursday, McCain scolded the Europeans for not properly learning the lessons of Munich in 1938: “They've been a huge disappointment to me. Their actions recently have been reminiscent of the 1930s.” For the neocons, it’s never not 1938.

This was followed by McCain’s egregious—though given his past behavior, not terribly surprising—acting out in Munich on Saturday, where he dismissed German chancellor Angela Merkel’s calls for a diplomatic approach to the standoff as mere “foolishness.”

That the United States and NATO have the capability to “level the playing field” by arming Kiev with radars and anti-tank missiles is a commonly held idea among supporters of McCain’s preferred policy option. The argument goes something like this: every time Kiev’s forces have been on the verge of victory over the separatist forces, Russia has stepped in, escalated and turned the tide in favor of the rebels. We see this happening right now in the battle taking place in and around the Debaltseve junction in eastern Ukraine. We may well see something similar occur in and around Mariupol. If the West, so the argument goes, would just provide Kiev with the armaments it needs, then Kiev would have a better chance at securing a victory over the rebels. After all, if the Russians can supply their clients, why can’t we supply ours?

Besides the fact that such a program of proxy-supply rarely works, and when it has, has usually come back to haunt us (see under: bin Laden, Osama), the idea that Kiev would emerge victorious if only we act as its principal arms supplier is fallacious simply because there is nothing that we could provide them with that Russia, in turn, couldn't and more to the point, wouldn’t, supply the rebels. It would simply mean a net increase in armaments on both sides, which would almost certainly result in more and more civilian deaths. The simple fact of the matter is that Russia is so situated geographically that it has an overwhelming advantage over NATO in the region.

Further, even if the president went along with the McCain plan, and the United States did supply military aid to Kiev, are we so sure that their troops are equipped with the proper training to use these weapons? Doubtful. And if the United States then has to send in military advisers to train the Ukrainian troops, what happens if one of them gets killed by Russian forces? Is McCain willing to risk a shooting war—or possibly a nuclear war—with Russia over the fate of the Donbas? It would seem so.

Another objection to arming Kiev is the nature of the regime to which we are propping up. The government in Ukraine is still wondrously corrupt. It is led by an oligarch who many conveniently forget was closely tied to ancien regime, having served as minister of trade in 2012 and as minister of foreign affairs in 2009-2010.

Its armed forces are an admixture of volunteer battalions and regular forces that are not under a unified command. What is more, Kiev is struggling with recruitment efforts. According to the Ukrainian daily Korrespondent, only 6 percent of those showing up this year for the call to military service have done so voluntarily. Does McCain propose to send arms to an army that has no recruits with which to use them? Are we so sure that the weapons McCain would like to provide Kiev wouldn’t end up in the wrong hands, as they have so many times before, in Iraq, in Syria, in Libya and in Afghanistan?

If the idea that the United States can help “level the playing field” by funneling billions of dollars worth of equipment that Ukrainian forces don't know how to operate is a fantasy, the idea that those same weapons would serve to deter Mr. Putin is no less so. The more likely scenario is that Putin will do what he did back in 2008. In April of that year, NATO’s Bucharest Memorandum flatly and unambiguously stated that Georgia and Ukraine “will become members of NATO.” By August, Russian tanks were idling 40km outside of Tbilisi. In September, Mr. Putin reportedly told the EU’s Jose Manuel Barroso: “if I want to, I can take Kiev in two weeks.” It could still happen.