Here's Why South Africa's ANC Might Not Rule Forever 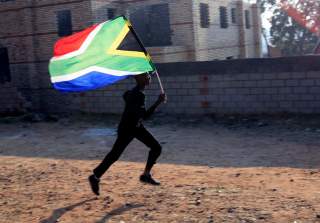 On Valentine’s Day 2018, it was announced that South African president Jacob Zuma would be stepping down in favor of the newly elected African National Congress (ANC) leader Cyril Ramaphosa. The news was greeted in many corners with relief, as the nine years Zuma spent in office were often characterized by corruption and economic mismanagement. Zuma built a power base that relied on an extensive network of patronage, while he showed little hesitation to spend millions in public funding to upgrade his private residence. In an egregious display of graft, he also allowed the wealthy Indian-born Gupta family to exert their influence on ministerial appointees. The result of Zuma’s activities led to infighting within the ANC and a rapid erosion in public trust. As the party has sought to ensure its political survival, there is a widespread sentiment among South Africans that the ANC has lost its ability to govern effectively.

In the 1960s, the French sociologist and ecologist René Dumont observed that across Francophone Africa, elites were becoming made up of members of the civil service who were focused primarily on personal enrichment. He noted: “[a] new type of bourgeoisie is forming in Africa, that Karl Marx would hardly have foreseen, a bourgeoisie of the civil service.” When the ANC under Nelson Mandela was first elected, expectations were high that the party would tackle inequality and provide as their election posters promised “A Better Life for All!” The ANC was put in charge of running one of the most sophisticated economies on the continent, which relied heavily on its manufacturing and commodities sector. In the years after 1994, under Mandela’s successor Thabo Mbeki, the policy known as Broad-Based Black Economic Empowerment (BEE) was introduced to “advance economic transformation and enhance the economic participation of black people in the economy.” Companies were encouraged to partner with black firms and recruit more blacks to senior roles. One early beneficiary was Ramaphosa, who, through his Shanduka Group, acquired stakes in companies such as Glencore, Standard Bank and the telecommunications firm MTN, making him extraordinarily wealthy. According to Forbes in 2015, Ramaphosa’s net worth was estimated to be $450 million. It is also notable that in 1999 it was Ramaphosa who was asked to chair a BEE Commission to formulate policy suggestions for the government. While it was intended to be a form of redress for racial inequality, criticism mounted early on that BEE was “not broad-based” and only favored a “few politically-connected individuals.” This is further supported by recent studies, which suggest that approximately only 15 percent of the black population is benefitting from the scheme.

Professor Roger Southall from the University of Witwatersrand believes that when the ANC came to power, it “viewed its control over the civil service and parastatals as the instrument for extending its control `over the commanding heights of the economy.’” Indeed, the use of public funding to ensure loyalty was a strategy that Zuma frequently adopted. For instance, the number of serving cabinet ministers increased from twenty-eight to thirty-five, and in the provinces, the jostling by ANC members for positions has led to an upsurge in political assassinations. The issue is most pronounced in the province of KwaZulu-Natal, where at least twenty-two politicians have been killed since January 2016. In May, a provincial mayor was arrested after it emerged that he plotted to murder a municipal speaker who was regarded as an “obstacle” in the awarding of a tender. Ramaphosa has said he wants to tackle corruption and will “review” the number and size of government departments, but the jury is out on whether he will be able to reduce South Africa’s expanding civil service. For example, the wage bill alone for the 2018—19 period is expected to make up 35 percent of government expenditure.

In the meantime, job creation in the private sector has slackened in recent years, as the country’s once robust manufacturing and mining sector has fallen into a state of a decline. Competition from Asia plays a significant role, as well as labor costs. To provide some context, in 1977, the country’s GDP ranked eighteenth in the world, but by 2013, it had fallen to thirty-third place. Unfortunately, the government cannot operate without taxpayer funds and out of a population of fifty-six million people, roughly five to six million pay personal taxes and just half a million are responsible for paying "upwards of half of all income tax." At the same time, public debt levels have doubled since 2007.

Furthermore, according to recent figures, six million South Africans are out of work, and evidence of discontent at the slow pace of change is mounting across the country. According to Frans Cronje from the think tank, the Institute for Race Relations (IRR), “over the past decade, the number of anti-government protests has more than doubled, and since 2015, we have seen the sharpest increase on record.” In scenes that are reminiscent of the dying days of Apartheid, schools, municipal buildings, as well as buses and trains have been set alight. This also doesn’t even mention the crime and violence which is a daily hazard for all South Africans regardless of economic status. It is estimated that since 1994, half a million people have been murdered. The fear of crime is further compounded by revelations that many members of the police force have criminal backgrounds.

However, the issue which has dominated the news of late is the question of land. In February, a motion was put forward to look into whether Section 25 of the Constitution would allow for land expropriation without compensation. It has been touted as a mechanism to unlock the country’s wealth. A parliamentary sub-committee is due to present its findings in September, and while the president has given assurances that the policy will be carried in a way that will not “threaten food security or economic growth.” However, what is concerning is that one clause states that “property is not limited to land.” This means the ANC may see this as an opportunity to take further liberties within the private sector. This is especially worrisome since agricultural production accounts for just 2 percent of the country’s GDP.

When a country faces a decline in economic growth and a rise in national debt, finding new means of wealth becomes imperative. Yet attempts to radically transform the country by targeting successful companies and engaging in land expropriations, has many economists worried that South Africa will be subject to a massive capital flight and potentially even a Venezuela-type scenario. This is a concern driven in part by the rise of populist groups such as the Economic Freedom Fighters (EFF) under their firebrand leader, Julius Malema, and the more radical Black First, Land First movement under Andile Mngxitama. Both of them take inspiration from Hugo Chavez and his Bolivarian revolution, and both favor draconian measures such as nationalizing factories, mines and banks. Malema’s rapid rise from the former head of the ANC Youth League to becoming one of the country’s most popular politicians would be impressive if it were not for the rhetoric he uses that his detractors say is helping to stoke racial tensions. This includes remarks that “at least for now,” he and his group are “not calling for the slaughter of white people.” Malema’s party is now the third largest in the parliament and represents a legitimate threat to the ANC.

Given this confluence of events, it is perhaps not surprising that in the first three months of the year, South Africa’s economy contracted at the sharpest rate in almost a decade. In 2019, South Africans will head to the polls in a general election that is likely to be hotly contested and predictions are the ANC could fail to secure a majority. That is a fact that its members and beneficiaries may find hard to accept, as even Jacob Zuma once said that people need to accept that the ANC would rule until Jesus Christ returns.

Emily Boulter is a freelance writer who from 2010 to 2013 worked as an assistant to the vice-chair of the foreign affairs committee in the European Parliament in Brussels. Her work has featured in publications and online news sources including the RUSI Journal, Real Clear World and Global Risk Insights.

Image: A worker runs with the South African flag inside the Soccer City stadium in Soweto, Johannesburg June 10, 2010. The stadium will host the opening and final games of the 2010 FIFA Soccer World Cup which kicks off on June 11. REUTERS/Radu Sigheti (SOUTH AFRICA)