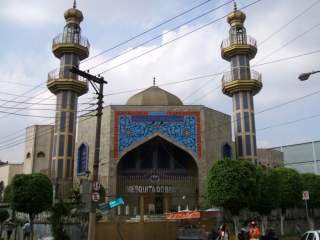 Across Latin America, Iran’s public face appears innocuous: mosques, cultural centers, schools, halal meat inspectors, religious literature, social work and even Boy Scout groups. Yet beneath the veneer of piety, outreach and interfaith dialogue, Tehran leverages connections with anti-American regimes and movements to gain a foothold in the region, and to indoctrinate local Muslims in its brand of revolutionary Islam. Rather than relying on the traditional tools of statecraft, Iran advances its agenda with mosques and missionaries.

Tehran’s use of Iranian and Lebanese Shia clerics as unofficial agents of the Iranian revolution is not new. The first such cleric to reach Latin America was Mohsen Rabbani, who in 1983 came to Argentina to lead the Al-Tawhid mosque and serve as a halal meat inspector in Buenos Aires. Both tasks appeared innocuous enough, but Rabbani was intimately involved in the 1994 bombing of a Jewish cultural center in the Argentine capital that killed eighty-five people and injured over three hundred.

Rabbani was not alone. Shortly after his arrival to Buenos Aires, another cleric, Sheikh Taleb Hussein al-Khazraji, made his way to Brazil. Both Rabbani and Khazraji were cited by the slain Argentine prosecutor Alberto Nisman in his 2013 report on Iran’s Latin American networks. According to Nisman, “Interpol [Brasília] informed that Khazraji was an employee of the Iranian government and. . . was engaged in recruiting highly politicized believers to get them close to Teheran.” An integral part of their task was to dramatically expand Iran’s support base both among local Shia immigrants and through missionary work.

They succeeded. Though Rabbani left Latin America due to mounting suspicions over his involvement in the Jewish center bombing, he continues to run his recruitment program from Iran’s center of religious learning in Qom. Khazraji remains entrenched in the Shia community of São Paulo, Brazil, where he pursues his clerical tasks and the production of promotional literature in Portuguese.

The dual role of Shia clerics as religious and political emissaries of the Islamic revolution was underscored in 2010, when the U.S. Treasury identified another religious minister as Hezbollah’s representative in Latin America. According to the Treasury, Bilal Mohsen Wehbe “relayed information and direction between Hizballah leaders in Lebanon and Hizballah elements in South America,” and oversaw its counterintelligence activity in the “triple frontier” of Argentina, Brazil and Paraguay. Wehbe continues his missionary activity in Brazil undisturbed.

Another cleric reportedly linked to Hezbollah is Sheikh Ghassan Youssef Abdallah. Abdallah is active in Chile, in Brazil (frequently visiting the tri-border area, where his U.S.-sanctioned brother Mohammed Youssef Abdallah resides), and in Paraguay (where he once ran the Iranian mosque in Ciudad Del Este).

They are not alone. Alongside dozens of Iranian and Lebanese Shia clerics, there is also a new generation of locally born clerics who have joined their ranks. Converts are routinely sent to Qom, all expenses paid, to attend Iranian seminaries specially tailored to Spanish and Portuguese speakers, before they return home to act as Iran’s unofficial emissaries in their countries of birth.

The State Department recently pronounced that Iran’s influence in Latin America and the Caribbean basin is “waning” due to sluggish trade, and a noticeable downturn in high-profile official visits from Iran since President Hassan Rouhani succeeded his predecessor Mahmoud Ahmadinejad.

Iranian influence, however, should not be measured in the number of presidential visits to regional capitals. It is the day-to-day missionary work performed by religious envoys that is steadily buying influence, conveying messages of anti-Americanism and hatred for Israel.

While the outward posture of Shia leaders broadcasts an ecumenical message of tolerance and dialogue with Catholicism, Latin America’s dominant faith, the modus operandi behind closed doors is militant indoctrination.

One such example is the Boy Scouts attached to Shia mosques. These groups have the outward appearances of innocent youth movements, imparting a social conscience to new generations. In fact, they are a mirror image of Hezbollah’s Mahdi Scouts, are led by Lebanese instructors who do not hide their sympathy for Hezbollah, and are supervised by Wehbe, the U.S.-sanctioned Hezbollah cleric.

Images of the Scout groups show members enacting military drills during May 25 celebrations—Resistance Day in Lebanon’s calendar, marking the date of Israel’s 2000 withdrawal from South Lebanon. During Ashura ceremonies last October, Scouts and their instructors at the Mesquita do Brás in São Paulo were wearing Hezbollah T-shirts showing its logo and the Ashura 2015 logo designed by Hezbollah’s media relations department.

The cult of martyrdom is also prevalent. In June 2014, the Imam Ali mosque in Curitiba hosted a well-attended memorial service for a young Hezbollah fighter killed in Syria in March 2014. His Brazilian uncle, clad in a Hezbollah scarf, led the memorial, exalting the fallen youth as a role model.

Community members routinely post photographs of the Brazilian flag juxtaposed with the Hezbollah logo, and photos of young Hezbollah men in South Lebanon proudly holding the same flag. Hezbollah T-shirts can even be purchased online for thirty Brazilian reais, or less than $10.

What can the U.S. government do to counter these activities? Ultimately, it is up to regional governments to recognize the threat posed by a foreign power radicalizing local populations. But it would be an important step if the U.S. administration were to acknowledge that Iran’s religious outreach is intoxicating thousands of captive minds. After all, the Latin American targets of Iran’s anti-American indoctrination could one day draw the logical conclusion from their education that striking the “Great Satan” itself is no less than God’s will.