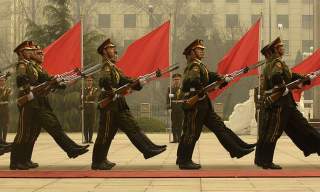 Every year at the beginning of March, China convenes the National People’s Congress and the Chinese People’s Political Consultative Conference to listen to the premier’s government work report, consider new laws and discuss China’s future. The so-called “Two Meetings” also include a large contingent of People’s Liberation Army (PLA) delegates, who play up the legitimacy of China’s approach to security and justify the security budget. Compared to previous years, the PLA contingent downplayed the military’s deterrent role and avoided any “peace through strength” talk. On policy, President Xi Jinping reiterated the importance of military-civil integration as the way for China’s military to develop the human and technical expertise to achieve the goal of “fighting and winning local wars under informatized conditions.”

On March 4, National People’s Congress (NPC) spokeswoman Fu Ying announced that the official military budget would rise roughly 10 percent, setting off the annual coverage of Chinese defense spending and what the figure means for the PLA’s modernization. As always, Chinese government voices pushed back and pointed out how little the budget increase buys the PLA—something that cannot be verified on the information China makes publicly available.

Beijing’s propaganda attacked Western concerns about Chinese intentions, making a fourfold argument about why the increase does not speak to nefarious intent.

First, the defense-budget increases have been forced on an isolated China, because it must be self-reliant in the face of an arms embargo “groundlessly forced on China by the European Union and the United States. In this sense, the West is a catalyst for China’s relatively ‘big’ military budget.”

Third, Peng Guangqian, one of the lead authors on previous editions of The Science of Military Strategy, observed that armaments and equipment becoming more expensive is a “universal practice and trend in every country,” explaining increases in the defense budget.

Fourth, according to Major General Xu Guangyu, a senior consultant to the China Arms Control and Disarmament Association, “the current military spending is still very insufficient and cannot fully meet the needs of China’s national defense.” Chinese media avoided discussing absolute budget numbers compared to other countries, instead taking a novel approach to discuss “per capita” (more properly, per soldier) spending. For example, a China Daily article compared China’s roughly $61,800 per soldier to the United States’ $416,666 per soldier and Japan’s $168,016, taking these numbers as a sign that China’s defense had dramatic room to grow before it could be considered a threat.

The message seemed to be: Irrespective of the PLA’s insufficient funding, China, of course, is unthreatening. Beijing also enlisted the aid a U.S. ally, Egypt, to reinforce its propaganda. One Egyptian scholar opined “China is a strong and peaceful country. We never heard about a Chinese invasion or occupation.” A retired Egyptian general added “I believe the Chinese policy in general is inclined to peacefulness, as I don’t remember a case when China made an act of aggression against a neighboring or non-neighboring state.”

The emphasis on China’s defense insufficiencies translated into a toned-down treatment of deterrence. Last year, Chinese delegates emphasized that Chinese weakness led to foreign depredations and an institutional editorial in the PLA Daily even invoked the Roman “if you want peace, prepare for war.” The most provocative comment this year probably came from the Foreign Ministry. Despite claims that the military parade to commemorate Japan’s surrender in World War II will not be an exercise in “muscle flexing,” Foreign Ministry spokeswoman Hua Chunying told a news conference that the parade’s “goal is to show that China and the people of world have the capability and determination to defend peace.” More typical of this NPC were comments like those of General Zhao Shi, head of the General Logistics Department, who said the military is the “solid foundation for national prosperity.” One of the few other deterrence references appeared in a Xinhua editorial that described China’s defense needs “a responsible and major stakeholder like China needs sufficient strength to prevent a possible conflict or war [caused] by miscalculating, hot-headed neighbors.”

The hot-headed neighbor, of course, is Japan. The NPC continued a relentless propaganda campaign tied to relevant seventy-year anniversaries of World War II, such as the Cairo Convention and the Japanese surrender, and trying to paint Tokyo as a revisionist power, upsetting the status quo in East Asia. The latter point is what Premier Li Keqiang meant when he told the NPC delegates that “China will work together with other countries to uphold the victory of World War II and international justice.” Commentators were even less circumspect, such as Dong Manyuan of the Ministry of Foreign Affairs–run think tank China Institute of International Studies, who told the China Daily that “some countries want to blur their wartime history and destroy the world order that has ensured 70 years of peace.”

The purpose of this kind of talk—whether at the NPC, the recent past or at the announcement of the East China Sea Air Defense Identification Zone—appears to be twofold. The first justifies China’s defense spending as a means to sustain the status quo. The second tries to make common cause with Washington in a language that Americans both understand and appreciate. World War II and U.S. actions in the aftermath of the war established the rules-based system that U.S. policy makers and pundits hold so dear. Beijing is attempting to frame Japan, rather than China, as the greatest threat to stability in East Asia.

On the policy front, Xi placed the heaviest emphasis on military-civil integration (junmin ronghe, 军民融合) in his speech to the PLA delegation. Military-civil integration, perhaps most simply described by China Youth Online, embeds national defense and military modernization within the country’s system of social and economic development. China’s economic, technological, educational and human-resources development all benefit. China’s military leadership believes “fighting and winning local wars under informatized conditions” requires militaries to build off of developments in the civilian world.

This year’s NPC offered little groundbreaking, especially considering that past congresses involved calls for new approaches to protecting Chinese interests abroad and the creation of China’s Coast Guard. Beijing once again demonstrated that its military modernization is a marathon, not a sprint, and that Chinese leaders are concerned with shaping perceptions about the country’s security environment and how they perceive threats. Some Chinese concerns are certainly worth taking into account; however, the party’s willingness to take credit for the Kuomintang’s heroism in World War II and the quoted Egyptian scholars’ ignorance of China’s conflicts suggest Beijing’s words cannot be taken at face value. This superficial rhetoric can only make it harder for Washington to negotiate with Beijing over legitimate interests while discarding the detritus of propaganda.

Peter Mattis is a Fellow with the Jamestown Foundation and a visiting scholar at National Cheng-chi University’s Institute of International Relations in Taipei.