A Hidden Opportunity for Russia and Japan 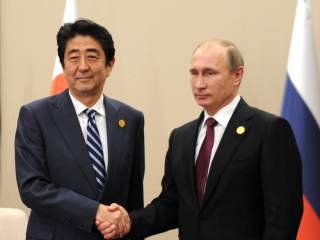 Japanese foreign minister Fumio Kishida recently met his Russian counterpart Sergei Lavrov ahead of an upcoming meeting between Japanese prime minister Shinzo Abe and Russian president Vladimir Putin. The main item on the agenda will be working toward resolving the ongoing dispute over the Kuril Islands (which Japan calls the Northern Territories).

One meeting between the two leaders is not likely to bring about any substantial results on the issue, given the long-running nature of the territorial spat, which dates back to after the Second World War. Furthermore, neither side is likely to budge on the issue, particularly for reasons of national prestige. A more assertive Russia wishing to build its diplomatic and political clout in East Asia is unlikely to be willing to display weakness on the issue of its territorial interests.

Japan, given its disputes over groups of islands with China and the Koreas, needs to show a measure of consistency with regards to its territorial quarrels. Compromise on the Kurils may send an undesired signal to China and the Koreas that it is willing to soften its stance on those disagreements as well.

Nevertheless, even if no major progress on the Japan-Russia islands dispute is made, a healthy and substantive discussion on the islands may be a chance for Japan and Russia to make inroads in their overall bilateral relationship. It may help solidify Russo-Japanese cooperation in other areas, specifically regarding mutual security concerns toward China and North Korea.

The Japanese and Russian governments recognize the need for deeper collaboration between the two countries, and officials have vocalized their hopes that Japan-Russia ties will reach a higher level of potential. The Kuril Islands/Northern Territories dispute does not constitute a major national-security threat for Japan or Russia, but it does warrant enough irritation for the two sides to frustrate what could otherwise be a highly productive and robust relationship.

Japan and Russia have already shown a propensity for cooperation in other areas of regional politics and security. After North Korea's fourth nuclear test, Japan reached out to Russia in the hopes of mutually coordinating a response to the DPRK's provocations. A deeper rapprochement between Moscow and Tokyo, therefore, has the potential to provide an opportunity to mount greater pressure on North Korea.

To be sure, Russia's ability to exert influence on North Korea is highly limited, especially when compared with China's ability to do so. Yet in this regard, an improved relationship between Moscow and Tokyo may help to break the perceived camp division with regards to regional attempts at managing the North Korean security threat. With reports of a potential fifth nuclear weapons test in North Korea, now is probably an opportune time for Japan and Russia to deepen their partnership.

A more distant yet pertinent aspect of the regional effects of closer Japan-Russia cooperation is the Russian position on the South China Sea. Despite the growing public concern in the West over a supposedly rising China-Russia bloc, Russia remains wary of China's military rise. In fact, several figures in the Russian foreign-policy community consider Japan to be a potential counterweight to China in Russia's system of partnerships in Asia.

China and Russia have stated that the South China Sea dispute should not be internationalized, although China will need external validation for its claims in the region. Japanese involvement in the dispute has been growing, yet neither Japan nor Russia's involvement in the dispute have reached truly substantial levels. An increase in Japan-Russia rapprochement, while not necessarily inducing Russia to take a stand against China, may reduce Russia's willingness to explicitly support China in the dispute.

Critics of the position that improved Japan-Russia ties can be beneficial to the United States are likely to argue that such a development would signal American weakness. Yet America still remains one of the most important fixtures in Japanese security. With particular regards to Japanese foreign policy, however, there is no way that Russia could feasibly become an "alternative" to the United States.

Japan, for its part, has recently shown a propensity for making its own decisions regarding Russia against American wishes.

Improved Japan-Russia relations could potentially serve America’s East Asian interests. There is, of course, every chance that the upcoming meeting could go completely awry and cause a setback in Moscow-Tokyo ties. Ahead of the May meeting of the heads of state, a measure of cautious optimism is perhaps the best position for the concerned populations and other observes to take.

Anthony V. Rinna is an analyst for the SinoNK scholarly research group. He previously served as a security affairs researcher at the Foreign Policy Research Institute in Philadelphia. He currently resides in South Korea