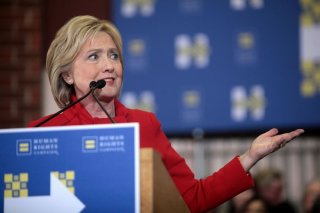 There’s an unwritten law in American politics that you can attack your opponent but lay off your opponent’s constituency. The people, after all, are sovereign in our republic, and it is well understood that you can’t ridicule or dismiss a sizable segment of the people without attacking the entire American system. Most politicians understand this instinctively, though lapses inevitably occur.

One of the most amazing lapses occurred Friday night when Hillary Clinton’s attacked what she calculates as half of the Donald Trump constituency. At a LBGT fundraiser in New York, she said they could be put in a “basket of deplorables. Right? [Laughter/applause] The racist, sexist, homophobic, xenophobic, Islamophobic—you name it. And unfortunately there are people like that. And he has lifted them up.”

Of course she also talked about “the other basket” of human beings “who feel that government has let them down, nobody cares about them, nobody worries about what happens to their lives and their futures, and they are just desperate for change. It doesn’t really matter where it comes from.”

So let’s look at these two segments of Trump-supporting U.S. citizens, constituting probably some 40 percent of the electorate at this moment (about the same as Clinton’s current constituency). But first let’s pause for just a moment to observe that visualizing her opponent’s voters in “baskets” is incendiary in itself, reflecting the extent to which Clinton looks down on masses of her fellow Americans.

In the first category we have the “deplorables”—constituting some 20 percent of the electorate. That’s a lot of bad guys, but certainly enough to get rich people to part with their money at a fundraiser of super-libs who don’t want to have to think about people not like themselves—in other words, ordinary people with ordinary lives. These fat cats paid between $1,200 and $250,000 to get into the event—with Barbra Streisand singing songs with improvised lyrics ridiculing Trump—and it generated a reported $3.1 million for Clinton’s “Victory Fund.” Not a bad haul for a night’s work.

By portraying this first basket of Americans as deplorable racists, homophobes, xenophobes, Islamophobes, Clinton essentially declared herself above the debate. If these people can be dismissed from American political discourse, she doesn’t have to pay any attention to their cares, concerns, fears, hopes, political perceptions—or, for that matter, their lives. They’re simply deplorable.

But what about that other basket. She does care about them, she avers, explaining, “These are people we have to understand and empathize with as well.” But look carefully at her words. These people, she says, are essentially dupes. They are so desperate for change that they will even turn to Trump because “he seems to hold out some hope that their lives will be different.” They don’t know any better. So, here again, Clinton excuses herself from any political requirement to engage in any serious debate with her Republican opponent, whose constituents are either deplorable or delusional.

It’s as if Clinton can’t quite grasp what this campaign year is all about. Take some of her deplorable categories.

Racist/xenophobe: Trump has forced into the campaign discourse the idea that borders matter to any sovereign nation, that any country without secure and delineated borders is a country that is losing its definition and hence its identity. America’s political class didn’t want to address this issue at this time, and certainly not in Trump’s terms of national identity. But Trump proved there was a silent constituency that wanted this matter discussed and debated. By labeling those people as racists, Clinton demonstrates that she just won’t allow herself to get drawn into that debate.

Homophobe: Without declaring a position on gay marriage and recognizing that the issue has been largely settled in the American polity, it is still worth noting that this political development—the West’s abandonment of centuries of sentiment on the definition of marriage in civic and moral terms—is a huge cultural development. You don’t have to be what Clinton means by “homophobe” to lament this change or to harbor lingering feelings that something precious has been lost. But the LBGT community has doubled down with attacks on the religious sensibilities of people who don’t buy in and with the silly bathroom and locker room issue regarding transgender people. And Clinton throws around the “homophobe” aspersion as a means of declaring the debate on these matters off limits.

Islamophobe: For 1,400 years, the West and Islam have been in intermittent clash, and much of it can be attributed to doctrinal differences between the two civilizations. Those doctrinal differences persist and contribute to the Islamist attacks we see today on Westerners by people called terrorists. Many Americans perceive that much of this tension and violence is intrinsic to the two civilizations, but that view is deemed politically incorrect by many liberal intellectuals. If it’s politically incorrect, it is beyond debate, which is where Clinton wants it.

No wonder Clinton lost her head in attacking a huge segment of her fellow Americans. She doesn’t want these matters to be debated, and neither do those rich people who attend her fundraisers. It’s all been settled, as far as they are concerned. But Trump has marshalled a cluster of political sentiment demanding debate on such issues. These people won’t go away, or yield to elite opinion, or bow to the supercilious establishment types who think they get to set the terms of debate in America.

The debate will go on, despite Clinton’s insult. In fact, the insult now becomes a significant part of the debate.