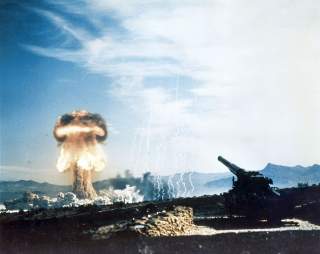 With his customary keen insight, the Financial Times commentator Edward Luce recently observed that GOP nominee Donald Trump’s Achilles heel is a lack of character. Because of this, Trump’s opponents argue, he cannot be trusted with oversight of the U.S. nuclear arsenal.  In a recent Wall Street Journal op-ed piece, former U.S. Senator Sam Nunn (D. Ga.) asserted that of the two presidential candidates, only Hillary Clinton has “experience, judgment and skills” to have a finger on the figurative “nuclear button.”

At the third presidential debate, Clinton herself argued that Trump is unfit to be commander-in-chief. Specifically alluding to Trump’s proposal that Japan and South Korea develop their own nuclear arsenals, she charged that he is “very cavalier, even casual about the use of nuclear weapons.” Clinton may have scored a debating point here, but her foreign policy record demonstrates that  - even if for different reasons - her views on nuclear weapons are at least as reckless as Trump’s. To understand why, we need to go back to the Cold War, when the United States used its nuclear arsenal to protect Western Europe from a potential Soviet attack.

After World War II, nuclear strategists distinguished between two different types of deterrence: direct deterrence and extended deterrence. Direct deterrence is the use of U.S. nuclear weapons to dissuade an adversary from launching a premeditated strike on U.S. territory.  Effective direct deterrence is easy, not hard. It requires only that the United States retains what is called a secure second strike retaliatory force - an arsenal capable of inflicting unacceptable damage even if an adversary attacks the United States first. Direct deterrence works because other states understand the consequences of attacking American soil: they would be subjected to devastating U.S. retaliation. That is a risk that adversaries will not run. After all, states and the regimes that govern them want to survive, not to kill themselves. In this sense, the much lampooned Cold War strategic doctrine of Mutual Assured Destruction (MAD) remains robust.

America’s vulnerability to nuclear war has always come from another quarter: bringing overseas U.S. allies in Europe and East Asia under the shelter of the so-called nuclear umbrella. This strategy is called extended deterrence. Extended deterrence was foundation of U.S. and NATO strategy during the Cold W because the alliance chose to rely on American nuclear weapons for security rather than building conventional forces capable of defeating a non-nuclear Soviet attack.

Transatlantic security relations during the Cold War drove home a point that was seldom debated openly back then, and seems to be forgotten today: although direct deterrence is easy, extended deterrence is hard. Very hard. Why? Because, as Patrick Morgan, an expert on nuclear strategy at the University of California, Irvine, explains: “One of the perpetual problems of deterrence on behalf of third parties is that the costs a state is willing to bear are usually much less than if its own territory is at stake, and it is very difficult to pretend otherwise.” For extended deterrence to work it must be credible. This means that the United States must convince potential adversaries, and reassure allies, that it if push comes to shove, it will do what it says will do: use nuclear weapons to protect its allies. The problem, however, is that nuclear deterrence is inherently incredible because rational states do not commit suicide to protect others. America’s adversaries know that, and so do its allies.

Transatlantic security relations during the Cold War were always fraught because of the built-in tensions created by the NATO’s extended deterrence strategy. Indeed, the alliance’s cohesion was frequently stretched to the breaking point because of the conflicting strategic interests of the United States and Western Europe. Of course, policymakers on both sides of the Atlantic strived to avoid war with the Soviet Union. But as the “wizards of Armageddon” - the priesthood of nuclear strategists in think tanks and the defense ministries - played out possible conflict scenarios, U.S. and West European strategists each developed their respective versions of the “perfect war.” For the Americans, it was a conventional and/or tactical nuclear war fought in Europe (principally in Germany). For the Europeans, it was a war where the superpowers’ ICBMs flew high above an untouched continent on their way to the Soviet and American homelands.

During the Cold War, to reassure the West Europeans, and deter the Soviets, the United States was forced to adopt a very dangerous strategic posture on the Continent. Washington tried a number of expedients to convince the West Europeans that the United States would commit suicide on their behalf: trying to attain a first strike advantage (counter-force or damage limitation capability in nuke-speak), using tactical nuclear weapons, and then intermediate range nuclear weapons (INFs) to link the U.S. strategic nuclear arsenal to the continent’s defense. In essence, the United States - to use Thomas C. Schelling’s image - “threw the steering wheel out of the car” in a deliberate attempt to tie its hands so that a Soviet conventional attack on Western Europe would have escalated virtually automatically to a strategic nuclear exchange between the superpowers.  In other words, U.S. strategy was designed to lock in Washington to doing reflexively what it would not do rationally.

Of course, the Cold War in Europe never became hot. This does not mean, however, that extended deterrence “worked.” Rather, America’s security commitment to Western Europe never was tested, because there is no evidence suggesting that during the entire period from World War II’s end to the Soviet Union’s collapse, the Kremlin ever planned to initiate a war of conquest against Western Europe. Of course, it is a good thing that the U.S. security guarantee to Western Europe was not tested by the Soviets, because the United States would have paid a horrendous price for honoring it. Indeed, for precisely this reason, extended deterrence was a contentious issue that repeatedly stretched NATO's cohesion to the breaking point.

Throughout the Cold War, the West Europeans doubted that the United States actually would use nuclear weapons on their behalf. In 1961, French President Charles de Gaulle told President John F. Kennedy that Europe could never believe that the United States really would risk the destruction of New York in order to save Paris. Equally, because they understood the risks to their own country, some perceptive American policymakers were uncertain whether the United States should - or would - risk nuclear war to protect Western Europe. In 1959, for example, Secretary of State Christian A. Herter stated: “I can’t conceive of the President of the United States involving us in an all-out nuclear war unless the facts showed clearly that we are in danger of devastation ourselves, or that actual moves have been made toward devastating ourselves.” Twenty years later, in Brussels, speaking (supposedly off-the-record) at the annual meeting of the Institute for International Strategic Studies, former Secretary of State Henry  A. Kissinger - echoing Herter’s concerns - asked: “Don’t you Europeans keep asking us to multiply assurances we cannot possibly mean, and that if we do mean, we should not want to execute, because it would destroy our civilization?”

Such candor from senior officials about U.S. nuclear strategy was - and remains - rare. It comes as no surprise, therefore, that the American public remained blissfully unaware of the implications of U.S. Cold War strategy. In 1984, at the height of the crisis caused by the NATO decision to deploy U.S. INFs in Europe, a Public Agenda Foundation survey showed that over 80 percent of Americans incorrectly believed that the United States’ policy was to use nuclear weapons only to retaliate for a nuclear attack on the American homeland. Doubtless, this is what most Americans believe - wrongly - about U.S. nuclear strategy today.

Notwithstanding its illogic, during the Cold War, U.S. nuclear strategy did not lead to catastrophe. The absence of superpower conflict in Cold War Europe is explained by two factors. First, the historical record (including the opened portions of Soviet diplomatic archives) shows that Moscow never contemplated a deliberate - “bolt out of the blue” - attack on Western Europe. Second, after 1948, the demarcation line between the respective U.S. and Soviet zones of control in Europe was sharply delineated, and respected on both sides. Today, however, extended deterrence is facing new tests in both the Baltic States, and - even more perilously - in East Asia.

East Asia today is much different from Cold War Europe from 1950 to 1989. First, while the Soviet Union was barely half a superpower (except with respect to nuclear weapons), China’s economy already has surpassed that of the United States’. Unlike a tottering Soviet Union, China is a great power on the rise. Second, East Asia is a region where there are dangerous geopolitical flashpoints: the Korean Peninsula, the South China Sea, the Diaoyu/Senkaku Islands, and Taiwan, which China considers an integral part of Chinese territory. During the Cold War, the dilemmas of extended deterrence in Europe were essentially abstract. They allowed the wizards of Armageddon to engage in navel gazing exercises about the metaphysics of nuclear strategy. In East Asia, however, the perils associated with extended deterrence are acutely concrete. If the United States sticks to its present alliance relationships with Japan, South Korea, and Taiwan (which is a de facto U.S. security protectorate), the risk of being entrapped by its alliance commitments in a nuclear conflict with North Korea, or - far more concerning - China is all too real.