Hillary Clinton Is Wrong on Syria 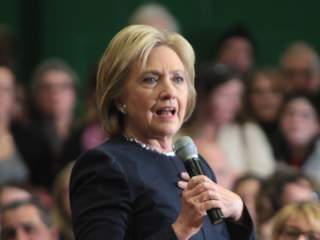 Hillary Clinton’s contention that Iranian troops should be kept out of Syria is both misguided and wrong. The fact is that Iranian special operators are in Syria and have been there since the early stages of the civil war. Alongside Hezbollah, Iranian Revolutionary Guards were deployed to bolster the Assad regime against Al Qaeda and more recently ISIS. For someone who claims to take advice from Henry Kissinger, Clinton’s policy on Syria is far from his version of realpolitik.

Context is important here. And to anyone with a modicum of insight on Iran’s complex history in the Levant, Clinton’s most recent comments are at best cringe-worthy. At worst, they underline that she and her team are either ignorant of basic Middle East history or too ideologically driven to acknowledge it.

Iran has had a presence in Syria and Lebanon since the early 1980s. Amid Lebanon’s ongoing civil-war, Iran deployed units of Revolutionary Guards to Lebanon’s Bekaa Valley. This was mainly in support of Shiite-militias who steadily coalesced into what we now know as Hezbollah. But it was Syria under Hafez al-Assad which served as the key conduit for the arrival of Iranian advisers. Iranian officers flew into Damascus airport on route to southern Lebanon where they supported Syrian troops in suppressing Palestinian guerillas.

By 2012, senior Iranian officers, among them Qassem Suleimani—the commander of Iran’s Revolutionary Guards—were again flying frequently into Damascus airport. This time it was to supply, advise and coordinate with the government of Bashar al-Assad and its security services.

Iranian intervention in Syria materialized most acutely during the battle over Qusayr in April 2013. Long an important commercial hub on Syria’s border with Lebanon, Qusayr had become a pivotal strategic theater in the regime’s efforts to consolidate territory in western Syria on the road to Homs and Hama. By June, Hezbollah, in coordination with Iranian Revolutionary Guards, surrounded Qusayr and expelled a number of rebel militias, notably Jebhat al-Nusra—Al Qaeda’s local affiliate in Syria.

The Assad regime’s capture of Qusayr dispels two myths propagated by Clinton. First, it shows that Iranian troops are active in Syria and have proven critical to the regime’s confrontation against Al Qaeda. The campaign to retake Qusayr was largely orchestrated by Qassem Suleimani. Second, it undermines the idea that there is a “moderate” opposition in Syria capable of consolidating territory and waging war on two fronts, against the regime on one hand and jihadists on the other. If there was a “moderate” opposition in Qusayr then it embraced Al Qaeda—only to be ignominiously defeated by the regime and its Hezbollah and Iranian patrons.

Both Democratic presidential candidate Bernie Sanders and the Republicans should cross-examine Clinton and demand that she explain in detail the composition of the so-called “moderate” Syrian opposition. Historians and other scholars of war recognize that the nature of the conflict in Syria has driven away anyone who could at all be considered “moderate.” Moderate Syrians of means have long fled for Beirut, Paris, London and Dubai. Whereas those less fortunate have crowded refugee camps in Jordan, filled low-level service jobs in Egypt or embarked on a prolonged and uncertain journey to Europe.

In the Syrian civil-war, as in all conflicts, non-ideologues have sought refuge elsewhere. What’s left of Syria is a battleground between nihilist Islamic fascists and the regime, backed by their core Alawite, Druze and Christian supporters.

In the absence of a “moderate” opposition, it’s time for Clinton to recognize that the only real way of defeating ISIS and stabilizing Syria is to work with Iran, Russia and the regime. There is no alternative. ISIS is the existential threat to the United States. The Paris attackers pledged allegiance to ISIS as did the shooters in San Bernardino. It was ISIS, not the Ayatollas, the Revolutionary Guards or President Rouhani that motivated the San Bernardino shooters to slaughter their defenseless co-workers.

Clinton represents a welter of contradictions. On one hand, she supports the nuclear agreement with Iran, dismissing the notion that the agreement presents a real threat to Israel. On the other hand, she remains incapable of admitting a reality—that Iranian troops are already in Syria—and clumsily playing the Israel card to add credibility to her flawed argument. Hillary has asserted that “inviting Iranian troops into Syria” would put them on Israel’s “doorstep.” If Hillary was truly concerned about Israeli security, surely she would care more about a nuclear-armed Iran rather than Iranian troops in Syria with a mandate to engage ISIS.

With no support from the United States, the regime and its Iranian (and Russian) allies have managed to consolidate recent gains and are in a position to turn their sights on the so-called caliphate. The recently brokered cease-fire suggests that the State Department at least tacitly acknowledges the regime's staying power and the multitude of forces supporting it on the ground, including Iranian troops. John Kerry is the one practicing realpolitik while Hillary continues to play politics.

An efficacious foreign policy now dictates that the United States begins coordinating with the regime and its allies. Hillary—as well as the other candidates—should support this initiative and shed all delusions of removing Assad. Only then can we begin to speak seriously about defeating ISIS and addressing the region’s catastrophic humanitarian needs.

Max Reibman is a Washington DC-based analyst of politics and business in the Middle East. He holds a PhD in Modern Middle East History from the University of Cambridge where he was a Gates Cambridge Scholar. Follow him on Twitter @maxyreibman