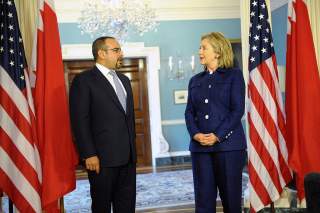 Describing a country as a “land of paradox” is a horrid cliché of foreign policy writing, but it’s unfortunately how we must begin our examination of Bahrain. The tiny Middle Eastern nation is majority-Shia yet ruled by Sunnis, wealthy yet with a very high unemployment rate, an island that often seems enveloped Lesotho-like by Saudi Arabia. Bahrain tends to get lost in our discussions about the Middle East, blurred in with that agglomeration known as the “Gulf States,” though during the Arab Spring, at least for a couple weeks, it came front and center.

Inspired by protests in Egypt and Tunisia, anti-government demonstrators spilled into the Bahraini capital of Manama in February 2011, converging on the Pearl Roundabout, a traffic circle towered over by a monument that resembled a white stone. The regnant al-Khalifa monarchy, on what would become known as “Bloody Thursday,” cleared the junction, but this only ignited public fury. The protests grew and the Khalifas eventually requested assistance from the Gulf Cooperation Council. On March 14, dozens of armored vehicles carrying Saudi and UAE troops came rumbling across the King Fahd Causeway and into Bahrain. Protesters grimaced and experienced déjà vu—Saudi Arabia had occupied their country before, during the unrest in 1994.

Then, a day later, the crackdown began in earnest. The Bahraini government declared a “State of National Security” and deployed riot police, tanks, and helicopters to the Pearl Roundabout, where they killed several demonstrators and arrested hundreds. The monarchy crowed that it had “cleansed” and “purified” the intersection, and to cement its symbolic victory, the alabaster monument was demolished. Furious demonstrators planned another “day of rage,” but it was quickly squashed by pervasive security forces. The government went on to raze over two-dozen Shiite mosques and institutions, leading one man to remark, “It is a war on identity.”

That identity is Shiism. Bahrain is one of only three countries in the Middle East where Shiites outnumber Sunnis, yet it’s ruled by a Sunni absolute monarchy that often seems to have been exported from Riyadh. The Shias have long groused about discrimination at the hands of the Khalifas, as well as schemes to dilute their influence through the expeditious naturalization of Sunni immigrants. It’s a formula for prolonged unrest, and indeed, in Bahrain, the Arab Spring never really ended. Earlier this month, police let loose the tear gas on hundreds of Shiite protesters who were once again descending on Manama. This tension has made Bahrain a little-known epicenter in the Middle East’s sectarian cold (and sometimes hot) war, as the Shia wonder why they can’t assume autonomy as have their brethren in Iraq and Iran, and timorous Sunnis look to Saudi Arabia for reassurance.

Hillary Clinton was secretary of state when that fateful canary immolated himself in Tunisia, and she generally took a sanguine view of the Arab Spring, demanding that Hosni Mubarak allow for a democratic transition in Egypt, calling on Bashar al-Assad to negotiate with Syria’s opposition, and launching a war in Libya that ultimately deposed Muammar el-Qaddafi. She wasn’t silent on Bahrain either, exhorting the regime to “return to the negotiating table” and calling its crackdown “alarming,” but after the protesters were dispersed, the well of “deep concern” she reportedly expressed to the Bahraini foreign minister quickly dried up. As Josh Rogin documented in the Washington Post, by 2012 the Obama administration was inking fresh weapons deals with the Khalifas, and in 2015 it lifted its ban on selling arms to Bahrain, despite the fact that the government’s repression had only intensified.

So why the exception for Bahrain? Perhaps the better question is: Why the exception for the entire Gulf? The Saudi regime has been stamping out Shiite protests in its eastern hinterlands for years, with little pushback from Washington. The United States, though it postures as a global paladin of human rights, has interests and alliances just like any other nation, and right now the elite consensus is that the Gulf States are under our umbrella. There is also an inexorable and automatic tug to block any hint of Iranian aggression, whether real or imagined, little abated even by the recent nuclear accord. Iran’s sponsorship of subversive Shias in Bahrain and Saudi Arabia, two Cold War-era American allies, has placed those two countries lower on the liberal internationalist to-do list.

Clinton is one of those left-leaning interventionists (Senator Rand Paul cheekily labeled her a “neocon”) but that doesn’t quite cover it. On Bahrain, she’s a licentious dove, and perhaps even a cold-eyed realist, determined to preserve America’s Fifth Fleet naval headquarters there and blunt the dreaded Shiite crescent, while looking away from human rights violations. There’s no way to square Clinton’s pro-democratic rhetoric—to say nothing of her “we came, we saw, he died” bloodthirstiness against Qaddafi—with her administration’s cozying up to the Manama regime. Her values have their asterisks and their footnotes. So do those of most policymakers.

Clinton’s conservative critics, just as they used “Benghazi” as a synecdoche for the calamitous war in Libya, have tried to encapsulate Bahrain with a single scandal, a meeting between Hillary and the Bahraini crown prince, subsequent to his donation of $32 million to the Clinton Foundation. The right-leaning press has run several articles on this alleged quid pro quo, and good on them. But there’s a larger criticism to be mounted here, of a Secretary of State who professed big values and then didn’t apply them to the smallest of countries. That’s certainly a paradox, but is it a necessary one?