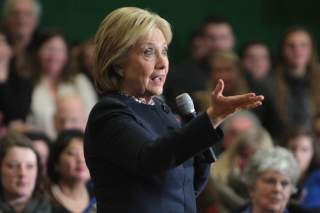 Clinton advertised herself as preserving Barack Obama's legacy. And she focused far too heavily on the president's personal popularity. In so doing she seriously underestimated popular discontent with his policies, especially Obamacare. As the election was drawing near, the very people that Obamacare was meant to assist were finding their insurance rates rising by as much as 25 percent, even as they were being told that the government would penalize them if they did not buy insurance. If that were not enough to turn voters off a candidate who promised to preserve Obamacare, Clinton's arrogation of Bernie Sanders' policies as her own compounded voter unease with the prospect of her moving back into the White House.

That fear was not unfounded. Clinton never endorsed Obama's nomination of Merrick Garland for the Supreme Court; she would only go so far as to suggest that he be confirmed by the Senate. She did nothing to counter the impression that if she were to win the election, she would nominate candidates for the Supreme Court that were far to the left of Garland, who is hardly a conservative, or even a true moderate. If that were not enough, she remained silent as Elizabeth Warren and Bernie Sanders virtually blacklisted several highly qualified Democrats for the job of Treasury Secretary because they purportedly were too close to Wall Street.

Clinton seriously overestimated the impact of minority voters on the election, and underestimated the fear she generated among white males in particular. She bet that a rainbow coalition of minorities would turn out in massive numbers in states that traditionally were inclined to go Republican. She was wrong. And she did not realize that her very presence on the ticket, compounded by Trump's incessant attacks on both her character and her policies, especially Obamacare, would energize the male white vote in a manner unseen for decades.

Finally, Clinton did not realize that she could not continue to skirt the law without the public indicting her, even if the Justice Department didn't so so. Even members of her own party were uneasy with her handling of the email issue. In addition, she hardly conveyed empathy for lower and lower-middle class Americans men and women—whom she labeled "irredeemables" — even as she and her husband amassed fortunes that smacked on unbridled greed.

Whatever one might say about Trump, and there is a lot that can be said, and has been said, he can hardly be accused of dissimulating, or mincing words. Trump chose to be Trump, however unsavory and downright ignorant he appeared to be. His fundamental approach to a variety of issues—immigration, alliances, defense spending—remained constant over several decades (even if he too flip flopped over his support for the Iraq War.) Clinton, on the other hand, flip-flopped on far too many issues, and had a record of playing fast and loose with the truth. It was hard to know where she really stood, other than wanting to be the first woman elected president.

Not enough women considered that reason enough to vote for her.

So now we have Trump. No doubt he will choose as top advisors some establishment Republicans who elected not to sign the various letters condemning his policies and character. He can also draw from the group of well-known figures who actively supported and advised him, such as Newt Gingrich, Senator Jeff Sessions, and Rudy Giuliani.

The stock market, which is about to take a massive nose-dive will certainly steady itself once he names some familiar faces to key Cabinet and White House jobs. Those appointments will probably also reassure America's allies and friends around the world. Both they, and the stock market will probably remain steady and hopeful until noon on January 20, 2017. At that point Mr. Trump will become President Trump, and only Heaven knows what.

Dov S. Zakheim is vice chairman of the Center for the National Interest.