Hillary Doubles Down on American Exceptionalism 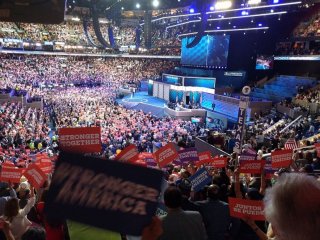 No speech has ever been as important for Hillary Clinton’s political future as her address last night at the Democratic National Convention, where she accepted the party’s presidential nomination after a hard-fought primary battle against insurgent candidate Bernie Sanders.

There were three general themes Hillary Clinton attempted to convey, all of which will be used by her campaign as the general election officially kicks off this summer: Americans cannot trust Donald Trump to do the right thing; Hillary is from humble roots and has been fighting for all Americans even before she entered into politics; and America requires strong and steady leadership during a period of rising geopolitical turmoil and terrorist attacks in the west.

First, Donald Trump, she argued, is so thin-skinned, impulsive, and angry that a bad day in the Oval Office could snowball into an international crisis of epic proportions. Although some of the language was surely exaggerated, her point is nonetheless on solid ground when one considers the various foreign policy positions taken by the billionaire and his record of mean-spirited, personal and threatening attacks towards anyone who criticizes him.

Lashing out at political opponents is one thing, but promoting a foreign policy in Europe that can only be described as a business transaction — the U.S. will walk away from its alliance commitments if Europe doesn’t starts paying immediately, economic stagnation be damned — is a mistake. Pontificating about South Korea, Japan, and Saudi Arabia perhaps getting nuclear weapons of their own is also ill-conceived. Endorsing the return of waterboarding as an interrogation tactic sends shivers down the spines of hardened military and intelligence professionals like Gen. John Allen (who spoke earlier in the evening) and former CIA chief Michael Hayden. Refusing to take the use of nuclear weapons off the table in the fight against the Islamic State, as Trump did when MSNBC’s Chris Matthews interviewed him several months ago, must leave Republican foreign-policy grandees blinking furiously and perhaps wondering how the GOP could really be pulling for an individual who espouses such a fundamental rupture of America's foreign-policy playbook.

Clinton asked Americans to think what it would be like if Trump actually won the election in November. “Ask yourself: Does Donald Trump have the temperament to be Commander-in-Chief? Donald Trump can't even handle the rough-and-tumble of a presidential campaign. He loses his cool at the slightest provocation,” she observed. “When he's gotten a tough question from a reporter. When he's challenged in a debate. When he sees a protester at a rally. Imagine him in the Oval Office facing a real crisis.” Now for the kicker: “A man you can bait with a tweet is not a man we can trust with nuclear weapons.”

Donald Trump’s acceptance speech was quite different: America as a nation under threat at home from criminals roaming the streets, ready to assassinate police officers; America as a country whose borders are so porous and insecure that potentially thousands upon thousands of jihadists from ISIL are pouring in, preparing to destroy the millions of soft-targets that attract large American crowds; America that boasts political and economic leadership that is stupid, callous and selfish.

Hillary’s speech, in contrast, took the opposite approach. Sure, there are problems, she says, but the United States is still the unquestioned superpower with the most technologically advanced and professional military in the world with that entrepreneurial spirit that we all know and love. As First Lady, senator, and Secretary of State, Hillary Clinton has long shown herself to be an avid follower of the American exceptionalism club: America and its people can do anything they want to do, achieve anything they want to achieve, and help hundreds of millions of people outside America in the process. But would this Kennedyesque call for greatness lead America to new heights or straight into a fresh, Vietnam-like morass abroad?

The United States, Clinton remarked, is a special place with unbounded hope and optimism. “Freedom and equality, justice and opportunity. We should be so proud that these words are associated with us. That when people hear them – they hear…America.”

With her address last night, Hillary Clinton has returned Trump’s declaration of war with one of her own.