Hillary Was Right: Rogue Nukes Are a Serious Threat 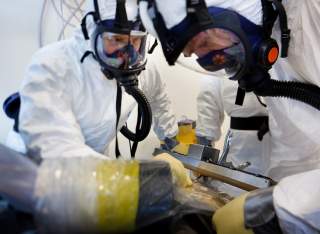 What is the greatest threat to national security? According to Democratic frontrunner Hillary Clinton in the first Democratic debate of the 2016 election season, it is the threat of nuclear weapons and material falling into the wrong hands. Former President George W. Bush said the same thing in a previous presidential debate. No matter your opinion of their politics, they are right. Both terrorists and smugglers have expressed interest in such a transfer, and we should consider ourselves lucky that one has yet to occur.

How might a terrorist acquire a nuclear bomb or enough nuclear material to create a crude weapon? The most likely scenario involves a terrorist group purchasing or stealing highly enriched uranium (HEU) and developing an improvised nuclear device. With just 25 kilograms of HEU, which could easily fit in a shoebox or backpack, terrorists could make a nuclear weapon capable of inflicting the same devastation as the bombs used at Hiroshima and Nagasaki.

With less nuclear material, terrorists could lace conventional explosives with radiological material to create a dirty bomb that would disperse radiological material upon detonation. The results would be devastating: in addition to casualties from the explosion, concerns of radiological fallout would create panic and economic disruption.

Obtaining the fissile material is the most challenging requirement for potential nuclear terrorists. Unfortunately, it’s nowhere near as challenging as it should be. According to a 2014 report from the Nuclear Threat Initiative, there remains nearly 2,000 metric tons of weapons-usable nuclear material spread across the globe and some of it is vulnerable to theft or sabotage. In the last two years, there were at least 325 publicly-known cases in which radiological material was lost, stolen, or outside of authorized control.

So where does that stolen and lost nuclear material end up? According to a recent AP investigation, some makes its way to the black market in Moldova. The investigation explored a network of informants and undercover officers countering nuclear material smuggling in Eastern Europe. Highlighted in the report are several sellers seeking to peddle their radiological material to terrorists to create weapons of mass destruction. One seller even offered to provide a free plutonium sample, enough to build a dirty bomb, if the buyers prove that “they are serious.” The other shocking revelation: Police often arrest the distributor, but fail to apprehend the smugglers or confiscate their supply.

While these scenarios are terrifying, there is cause for optimism. Thanks to U.S. programs like the Global Threat Reduction Initiative (GTRI), considerable progress has been made over the last twenty-three years to reduce the probability of terrorists acquiring nuclear material. GTRI and its predecessor programs have secured eighty-eight research reactors that formerly used highly enriched materials and removed over 5,140 kg worth of weapons-usable nuclear material (enough for at least 205 nuclear weapons) from around the world. Between this program and work by international organizations like the International Atomic Energy Agency, HEU has been completely removed from twenty-nine countries plus Taiwan.

These are important steps, but the threat is still very real. Unfortunately, the U.S. programs tasked with securing these materials have steadily declined in attention—and funding. Congressional appropriations for core nuclear security programs have fallen from $1.97 billion in 2013 to a requested $1.36 billion for 2016. According to Sen. Dianne Feinstein (D-CA), the funding reduction has led to a five-year delay for securing and converting nuclear reactors across the globe, pushing the completion of that project to 2035, twenty years away.

Some of this downturn is a result of programs reaching their conclusion and some is a result of souring relations between the United States and Russia, but allowing this critical work to be delayed or ignored puts our national security and the security of our allies at risk. Given the destabilization of countries with links to nuclear material or terrorism, and the rise of the so-called Islamic State or ISIL, much more needs to be done.

To prevent an incident of nuclear terrorism, the United States and its international partners must cooperate to lock up their nuclear material and weapons and implement the highest security standards, both at nuclear facilities and along potential smuggling routes. Nuclear nonproliferation programs in the Department of Energy should receive increased funding, and be given the same attention and priority as other national security programs. Nuclear security should transcend international posturing and congressional politics. The threat is too high and the risk is too great for us to wait and learn from a catastrophic mistake.

Greg Terryn is a Research & Policy Associate at the Center for Arms Control and Non-Proliferation.