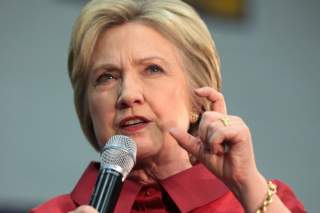 The senseless murder of forty-nine revelers at an Orlando, Florida, nightclub has amplified our need for a long overdue national conversation this election season about the overall direction of U.S. foreign policy and our proper role in the world. With the party nominating conventions just weeks away, now is a good time to start.

In what was billed as a major foreign-policy address several weeks ago, Hillary Clinton, who will carry the Democratic banner in this year’s contest for the White House, got the ball rolling, characterizing presumptive GOP nominee Donald Trump’s views as “dangerous.” Focusing on Trump’s statement that Japan and South Korea should defend themselves, rather than rely on the United States—even if this includes the possible use of nuclear weapons—Clinton was anything but subtle. “This is not someone who should ever have the nuclear codes because it’s not hard to imagine Donald Trump leading us into a war just because somebody got under his very thin skin.”

By comparison, Lyndon Johnson’s 1964 television ad smearing Barry Goldwater, which featured a nuclear mushroom cloud and a little girl with a flower, was the epitome of subtlety.

Clinton’s biting attack on Trump got high marks from many in the media. Yet, ironically, Trump’s foreign policy views, if you think about it, are less scary, even in their implications for possible nuclear war, than Clinton’s belligerent interventionism—sold as “American world leadership.”

Even if one fervently opposes nuclear proliferation, a strong case can be made that the United States should spend more time worrying about the radical or unstable countries that either have nuclear weapons or are seeking them—such as Iran, Saudi Arabia, Egypt, Pakistan and North Korea—than worrying about Japan and South Korea.

But that’s not where Clinton chose to take us. Instead, Clinton and much of the U.S. foreign policy elite, Republican and Democrat alike, obsess about Trump saying what should be obvious. It would not be a catastrophe if Japan and South Korea—stable, democratic societies and good world citizens—were able to deter aggression, if need be, even with nuclear weapons.

In fact, for many years, the U.S. foreign-policy establishment has covered up the danger to the American public, an illusion created by America’s extensive web of international security alliances and agreements. There is no plausible scenario in which any of our NATO allies, or any of the other nations that rely on the U.S. security umbrella—Japan, South Korea, Taiwan and Israel, for example—is going to be called upon to defend the United States. As a practical matter it only works the other way: we guarantee their security.

Very few U.S. allies have nuclear weapons, and if they get into a scuffle with a nuclear power such as China or Russia, even over a minor issue, such as contested rocks in the South China Sea, the United States could ultimately be responsible by treaty to defend them. This ultimately could mean using nuclear weapons and inviting a retaliatory strike on American soil.

This essentially irrational policy was initiated during the Cold War to protect countries from attack by the powerful Soviet Union. However, as bad as a Soviet takeover of Western Europe or Japan would have been, it pales in comparison to American cities becoming nuclear wastelands.

The implicit U.S. pledge to use nuclear weapons to defend its allies was predicated on the risky notion that it would deter a Soviet attack. There was little or no conversation about the cataclysmic horror that could result if deterrence didn’t work.

Donald Trump is wise to question the United States’ outdated, inflexible and costly commitment to protect large numbers of nations around the world. Such formal and informal alliances are the core of an overextended American foreign policy that requires having hundreds of U.S. military bases overseas and conducting countless—now seemingly perpetual—military campaigns, such as the wars Clinton supported in the Balkans, Iraq and Libya, to support this informal American Empire.

With a $19 trillion national debt, the United States can no longer afford such a policy.

Besides, it is unwise and puts the American public—and our military—unnecessarily at risk.

Ivan Eland is senior fellow and director of the Center on Peace & Liberty at the Independent Institute, Oakland, CA, and the author of Recarving Rushmore: Ranking the Presidents on Peace, Prosperity, and Liberty.