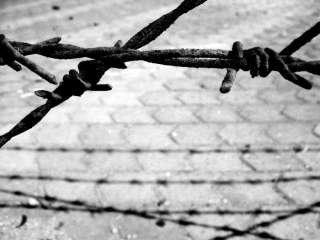 SEVENTY YEARS after it ended, the Holocaust remains the black hole at the heart of modern history. We possess mountains of meticulously collected information about it. Historians have produced libraries’ worth of sober, careful and often quite remarkable analysis. Even so, something about this evil still slips out of our grasp, resists interpretation and refuses illumination.

Timothy Snyder, the latest historian to propose an overall account of the Holocaust, is no stranger to the subject. His highly acclaimed book Bloodlands: Europe Between Hitler and Stalin traced the immensity of the slaughter that took place between 1933 and 1945 in the spaces where the old German, Austrian and Russian empires bumped up against each other. It did not really try to explain why the Holocaust happened, but it did make an argument about how the slaughter became possible. In order to carry out the murder of the Jews, Snyder suggested, Adolf Hitler depended on Joseph Stalin. Stalin not only provided a model of large-scale terror and murder that the Nazis learned much from, but also destroyed civil institutions throughout the western Soviet Union (especially Ukraine), and then in the Polish and Baltic territories he annexed in 1939 and 1940. It was precisely in these areas where the Nazis could begin the genocide in 1941. Here, in these lands of destruction, not only did they meet with little institutional resistance, but they could also count on the active connivance of desperate local populations. Without in any sense denying Nazi Germany’s ultimate responsibility for the Holocaust, Snyder cast the event as part of a larger pattern of mass death that also encompassed Stalin’s deliberate starvation of Ukraine in the 1930s and the mammoth wartime atrocities committed during the war itself against prisoners of war and civilians of all ethnicities.

Now, in Black Earth, Snyder has taken on the Holocaust directly. He brings to the subject the same passion that infused Bloodlands, along with his impressive expertise in the history and languages of Eastern and Central Europe. The book effortlessly sifts through sources in Polish, Russian, Ukrainian and German. It is not a narrative history. Snyder takes largely for granted knowledge of the basic events of the war, and of the chronology of the Holocaust itself. Nor does the book amount to a sustained piece of analysis, with a clear thesis statement bolstered by the systematic marshaling of facts. It is more of a meditation on the Holocaust, written in language that occasionally veers in the direction of lamentation or even prophecy. “Understanding the Holocaust is our chance, perhaps our last one, to preserve humanity,” Snyder writes in his conclusion. While most historians, if pressed, would probably confess that they hope to make a small contribution toward humanity’s preservation by seeking to increase its self-understanding, this is setting the bar very high indeed.

Unfortunately, Snyder does not surmount it. While his account displays flashes of brilliant insight, the different sections fit together poorly, and too much has been left out for the rest to be convincing. Black Earth feels like the fragments of a larger book. It does bring part of the Holocaust into sharp and revealing focus—but for the most part it does so by restating more clearly the arguments first made in Bloodlands. The book is also distorted by its inordinate attention to the secondary question of Polish gentile participation in the Holocaust. Such attention comes naturally to Snyder, a historian of Poland who has never disguised his affection for the Poles—especially those who struggled against Communism. But it leads him to some rather strange emphases and omissions.

Snyder begins with a rapid summary of Hitler’s worldview. Drawing from Mein Kampf, later writings, speeches and the work of the Nazi “crown jurist” Carl Schmitt, Snyder claims, plausibly enough—although without actually demonstrating the point—that there was a fundamental, career-long consistency to Hitler’s thought. Whether Hitler really did have a master plan for domination and the annihilation of the Jews or proceeded more fitfully is a question that historians will probably never answer definitively. According to Snyder, Hitler conflated science and politics, seeing the world in radically social-Darwinist terms as a death struggle between races for scarce resources, especially food (he read widely among various mystic cranks for much of his life and had also received weekly tutorials during his stint in Bavaria’s Landsberg prison from Karl Haushofer, a Munich professor of geopolitics and ardent proponent of Lebensraum). “He was a racial anarchist,” Snyder comments, “who believed there was a true state of nature to be restored.” It was the destiny of the stronger German race to subjugate, and ultimately exterminate, the weaker Slavs, and to expropriate their rich farmlands—the “black earth” of Snyder’s title. Standing in the way were the Jews, whom Hitler viewed as loathsome parasites who sought to subvert the natural victors through treachery.

Yet Snyder says little about why or how such a manifestly insane ideology could come to appeal to a modern, civilized nation, and still less about how it could help turn so many members of that nation into witting mass murderers. Was it just Hitler’s perverse political genius, his ability to turn what he gleaned from the cranks and fanatics he read into a compelling political message? Were there reasons more deeply rooted in German society, whether from far back in its history or from its recent experiences of defeat and depression? Snyder doesn’t say, and indeed does almost nothing to situate Hitler’s ideology within the broader histories of anti-Semitism or Western political thought. This is a particular pity given the recent appearance of David Nirenberg’s Anti-Judaism, which suggests that hostility to Jews is in fact a constituent element of Western culture. Furthermore, Snyder says little about state and society in Nazi Germany, presenting them essentially as passive and static instruments of Hitler’s will. Throughout the book, Hitler often comes across as the only significant political leader, the sole source of consequential action.

THE SECOND part of the book proceeds briskly through the 1930s, after Hitler’s Machtergreifung, or seizure of power. Here, Snyder’s preoccupation with the Polish question starts to make itself felt, and he devotes considerable space to the rise of an anti-Semitic nationalist movement in Poland committed to the goal of an ethnically homogeneous Polish state. He sharply distinguishes this movement, which wanted to expel the Jews but not exterminate them, from the Nazis, and to this purpose highlights the strange alliance between Polish nationalists and revisionist Zionists (including Menachem Begin and Avraham Stern, future leader of the terrorist Stern Gang) who shared an interest in sending Polish Jews to Palestine. He also argues that the differences between Polish and Nazi varieties of anti-Semitism created enough misunderstanding to derail Hitler’s hope for a German-Polish alliance against the Soviet Union. But he never makes clear why, or even if, this Polish story is central to an understanding of the Holocaust’s origins.

It is in the third, longest and most important section of the book where Snyder makes his real, if still problematic, contribution. Here, he returns to the central themes of Bloodlands, and to the lands themselves: the eastern half of pre-1939 Poland, the Baltic states, Belarus and Ukraine. These territories, Snyder argues, suffered from a crippling one-two punch. First, they were ravaged by the Soviet Union. Belarus and especially Ukraine endured the enormous disruptions and depredations of Stalinism, including the man-made famine and Great Terror that killed millions. After the start of the war, under the terms of the Nazi-Soviet Pact, the Soviets occupied eastern Poland and then the Baltic states, destroying state institutions and in several cases carrying out mass murder (notoriously, of Polish officers at Katyn in 1940). Up until this point, however, despite widespread atrocities and the confinement of the Jews of western Poland in ghettoes, the Nazis had not yet begun systematically murdering entire Jewish populations. But then, in the summer of 1941, with the Nazi invasion of the Soviet Union, that changed. By the end of the year, in Lithuania and Latvia, nearly all the Jews had perished.

As in Bloodlands, Snyder devotes relatively little attention to the question of why the Holocaust began at this point. He repeats his earlier claim—much criticized by specialists, some of whom suggested that it was redolent of the German historian Ernst Nolte’s incendiary assertion in 1986 that the Holocaust had essentially occurred as a response to the Red Terror—that Hitler only decided on genocide in reaction to the German army’s failure to make the USSR collapse “like a ‘house of cards.’” If the Soviets—whom Hitler saw as controlled by the Jews—could not be quickly defeated, Snyder writes, “then Germany would have to be defended by a systematic campaign against the Jews under German control.” As early as July 1941, the German press began to trumpet Hitler’s claim that “the Jews must be exterminated because they wish to kill all Germans.” As the historian Richard J. Evans has pointed out, however, this explanation for the shift to genocide is implausible, given the enormous successes the German army compiled throughout the first months of the campaign, occupying vast territories and major cities like Kiev and Minsk, destroying much of the Soviet air force and taking millions of Soviet prisoners. As Evans noted, Hitler himself declared on November 8, 1941: “Never before has a giant empire been smashed and struck down in a shorter time than Soviet Russia.” It is quite implausible that Hitler launched the Holocaust out of fear of Bolshevism or dismay at the performance of the Wehrmacht.