History Shows that Deterrence will Defeat China and Russia 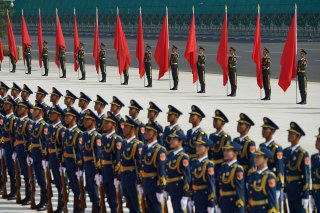 Much of the present discussion in Washington centers on two large budget bills on Capitol Hill. One is focused on infrastructure and the other on entitlement expansions of daycare and healthcare, as well as climate change programs.

However, a third vital budget bill that funds the entire federal government’s operations, including the Department of Defense, also looms. Lessons from history can help put these bills in perspective. Defending the United States requires greater spending, yet other, optional budget proposals surpass new spending for the defense budget. Past experience shows this is a mistake. Greater priority should be given to the defense budget rather than trillions to new social spending.

First, a person must examine the new social entitlement spending. Altogether, what is being proposed is that the U.S. government add some $6.5 trillion in entitlement spending over ten years above the current budget. Over ten years, that comes to $19,700 for every man, woman, and child in the country. Or on an annual basis, $650 billion is $1,970 for every person in America each year. That $650 billion per year is in addition to the estimated $6 trillion overall federal budget to be authorized in the current fiscal year that began the first of October.

By historical comparison, when President John F. Kennedy was elected in 1960 the entire federal government spent just over $100 billion annually for a population of 179 million, or expenditures of $558 per person. In 1981, with a population of 226 million, the U.S. government spent $745 billion in the first year of the Reagan administration, or $3,300 per person. These numbers provide perspective for the budget debate now being grappled with by the Congress.

Congress must fund every cabinet department each year. That “discretionary” budget, as it is known, does not include entitlements, such as Social Security, Medicare, Medicaid, and other programs. That “mandatory” spending makes up the vast majority of government spending, which hit $7.1 trillion in fiscal year 2021 (FY-21).

The government’s discretionary budget, of which defense is about 50 percent, is only a fraction of the overall federal budget. Discretionary spending was capped for nearly a decade starting in 2010 at roughly $1.3 trillion, with defense spending starting out at $670 billion and rising to $705 billion by 2020, or 14 percent and 12 percent of the entire federal budget, respectively.

Put another way, the United States spent about $2,100 on defense per every American in 2020, or fully one-third less spending per capita that was required to win the Cold War and defeat the Soviet Union.

What should the United States spend on the defense of the country when considering the nearly $6 trillion or $600 billion a year being proposed as new non-defense spending?

Now it is true the United States should only spend what is needed to implement its adopted national security strategy. That strategy is being reassessed in a national security review that also includes a nuclear strategy review. The review should be concluded late this year and folded into a budget that will be sent to Congress in February.

It is vital to modernize the country’s aging triad of nuclear platforms. Many systems have been in service for fifty years or more. Despite this, nuclear deterrence has worked perfectly for more than seventy years. It would take a compelling argument to make the case to abandon or change the current nuclear triad.

As this arsenal ages, it is worth considering what else is needed to continue deterring America’s adversaries.

The United States is already outgunned in conventional weaponry along the inner European border and the Pacific rim in Asia. The U.S. Air Force is the smallest in its history, with each airplane on average twenty-nine years old. Imagine the danger of driving a twenty-nine-year-old car, let alone a fighter jet.

The cost of maintaining old aircraft is high, which pushes the Air Force to reduce its geriatric force and put the savings into advanced, modern technologies. But that won’t happen until the end of the decade. This presents a dilemma. The currently proposed  defense budget would delay the Air Force’s modernization. In the meantime, it is highly unlikely that adversaries will pause their aggression.

A stronger defense is a stronger deterrent, and it is that deterrent that has historically helped stop conflict from breaking out. History is instructive on this point.

With the rebuilding of the U.S. military from 1981–88, the Reagan administration and a bipartisan Congress, along with America’s allies, reduced and deterred enemy military interventions back to lower levels, reduced enemy military forces deployed, and ended the Soviet Union.

Deterrence worked, not détente. The former strategy assumed the bad guys would be dissuaded from aggression by a strong U.S. military as opposed to being persuaded by U.S. restraint and peaceful intentions.

What are the lessons for the defense budget of today?

More robust investment is needed to meet current security requirements than has been previously approved. Congress recognizes this, as the House has added $23.9 billion to the defense budget. The relevant Senate committee has done the same.

But the bigger proposed budgets—containing trillions of dollars of new social spending—also propose a new companion ten-year budget with defense spending cuts of $330 billion over the next decade, the opposite direction required by security needs.

While defense spending has been modestly restored over the past half-decade, and America’s NATO and Pacific allies have increased their commitments to defense considerably, the free world must do more to meet security requirements. America’s two peer competitors—China and Russia—are enlarging their military capabilities at a pace not seen even during the height of the Cold War. The rise of authoritarian regimes in China and Russia presents a worrisome trend to remaining democratic bulwarks around the world.

Appeals of restraint are not going to work. Japan recently urged China to exercise such restraint regarding Taiwan. A Chinese television channel responded that if Japan came to the defense of Taiwan, China would bomb Japan with nuclear weapons until Japan “for the second time” unconditionally surrendered.

History shows that increased entitlement spending will not deter China or Russia. Increased spending on defense and deterrence will.

Peter Huessy is Director of Strategic Deterrent Studies at the Mitchell Institute.