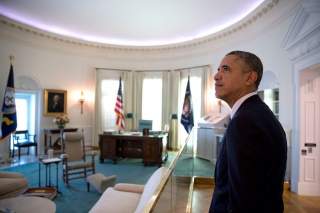 If there is a foreign-policy message that President Obama and members of his administration consistently and confidently tout, it is that global actors who engage in nationalistic and ideological aggression are “out of place” in the modern world.

In August, President Obama harshly denounced the radical Islamist group Islamic State of Iraq and al-Sham (ISIS) as a “cancer” in the Middle East, but then went on to declare that “one thing we can all agree on is that a group like ISI[S] has no place in the 21st century.”

Back in March, as Russia’s Vladimir Putin began what would be one of many major military incursions into Ukraine’s sovereign territory, Secretary of State John Kerry dismissed the actions as “19th century behavior in the 21st century.”

The problem is, the sort of behavior that the administration keeps pointing to as on the “wrong side of history” (Russia in Ukraine, China in the South China Sea, North Korea across the 38th parallel, ISIS in Mesopotamia) is not pre-20th-century behavior—it is pre-1945 behavior.

Why does this distinction matter? Because it shows that the Obama administration is making historic assumptions about contemporary global security without acknowledging its primary cause: America’s post–World War II leadership of global liberal norms and institutions.

The fact is, relative world peace and stability did not magically appear over the past seventy years simply due to the march of time—it occurred because in 1945, the United States made a historic decision (after being dragged into two destructive world wars) to overcome its isolationist instincts and enter world affairs in a permanent and sustained way. It did so by leading the creation of the United Nations; the global liberal economic system framed by the International Monetary Fund, World Bank and General Agreement on Tariffs and Trade (now World Trade Organization); and the Western defense alliance under the North Atlantic Treaty Organization.

Despite existing under the shadow of the Cold War, these institutions upheld global norms relating to territorial sovereignty, use of force, fair and free trade and other component parts of a global order that certainly benefited the United States, but also contributed to unprecedented international stability and prosperity. And after the collapse of the Soviet Union in 1989, it helped facilitate the further expansion of liberal democracy to countless millions around the world.

The Obama administration certainly understands all of this—Mr. Obama himself regularly praises the virtues of the contemporary “international order” as critical to American and global security. But the administration often acts as if liberal ideals are both self-evident and self-perpetuating—when in fact anti-status quo and anti-liberal forces have always been active in world affairs.

Indeed, far from being a “throwback” to the 19th century, Putin’s aggressive nationalism represents a most familiar component of international politics. The very same impulses can be seen, for example, in China’s muscle-flexing in its southern and eastern waters, and Iran’s efforts to expand its power and influence across the Persian Gulf and Middle East.

And ISIS, whose ideology springs from the same revolutionary Islamist hymnal as Al Qaeda and its affiliates, functions like other anti-Western ideological movements of the past, such as early-20th-century German and Italian fascism, and Cold War-era Soviet communism: spread the ideology, attract recruits and attack the West and its allies.

Because the Obama administration disregards the veracity of these challenges, its approach to confronting them has been to downplay the threats (Putin is “acting against Russia’s interests”; ISIS is a “JV” terror group with a “bankrupt” ideology) while announcing that America’s responses will be measured and limited. But this is clearly a failing strategy: Vladimir Putin has never been more popular in Russia; and ISIS is recruiting fighters more effectively than even Al Qaeda did in the 1990s. Like it or not, liberal ideas are not the only game in town.

With vital regions of the globe in turmoil, it is long past time for the Obama administration to rethink its assumptions about the world, and America’s place in it. They can start by looking to history, which offers three stark lessons regarding the current challenges to the global order:

First, if territorial aggressors and anti-liberal ideologies are given room to grow and flourish, they will. We saw this in the 1930s (the rise of fascism), the 1970s (post-Vietnam Soviet adventurism) and the 1990s (the growth of Al Qaeda). In each case, the United States and the West were slow to respond, and the results were glaring.

Second, threats to the global order must be met head-on with a concerted, coordinated and aggressive defense of liberal values and institutions. This does not mean simply military action—though that will play a necessary role. Far more important will be the “battle of ideas”: a clear case must be made against revisionist forces, to rally global hearts and minds behind a liberal vision of world order; as was done in the 1940s against fascism, and the 1980s against communism.

Third, and most important, none of this will happen without staunch American leadership. Over the past century, each of America’s attempts to reduce its role in the world was met by rising anti-liberal global threats, eventually requiring major U.S. reengagement. It turns out that the garden of liberal internationalism requires not only constant tending, but a lead gardener.

These lessons may be inconvenient for President Obama, who wants nothing more than to leave office as a president who reduced America’s burdensome global commitments and “ended America’s wars.” The world, however, is not complying.

The good news for Mr. Obama is that history also includes successful precedents for him to follow, should he so choose. Both Franklin Roosevelt and Ronald Reagan faced crushing domestic economic conditions, war-wary, isolationist publics and a world in which global Western ideals and institutions were in disarray. Through the power of their leadership and communication—both domestic and international—they reshaped a world aligned with American ideals and universal liberal values.

The next two years will determine whether Barack Obama will likewise be remembered as a president who, despite the costs and risks, stood firm in defense of the liberal world order and America’s role in upholding it.

Stuart Gottlieb teaches American foreign policy and international security at Columbia University, where he is also a member of the Saltzman Institute of War & Peace Studies. He formerly served as a foreign policy adviser and speechwriter in the U.S. Senate.