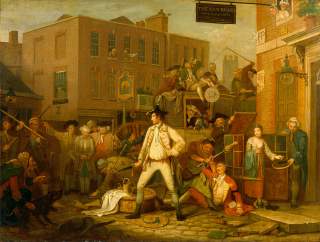 With a lumber of learning and some strong parts, Johnson was an odious and mean character. By principle a Jacobite, arrogant, self-sufficient, and over-bearing by nature, ungrateful through pride and of feminine bigotry [sic], he had prostituted his pen to party even in a dictionary, and had afterwards, for a pension, contradicted his own definitions. His manners were sordid, supercilious and brutal, his style ridiculously bombastic and vicious; and, in one word, with all the pedantry he had all the gigantic littleness of a country schoolmaster.

This from a man who owed his wealth and parliamentary position to nepotism and whose primary literary achievement was writing The Castle of Otranto, a melodramatic Gothic potboiler mainly remembered for inspiring shoals of third-rate horror tales and bathetic “romantic” novels. Walpole’s hatred extended beyond the grave. While Damrosch describes Walpole as “hypersophisticated,” there was also an element of priggishness and snobbery in his spiteful characterization of Johnson’s biographer, James Boswell, as “that sot.” It is also on display in the satirical verse, more hateful than clever, that he scribbled in his copy of the Life:

And half the volume filled with his own brayings,

Scotland beheld again before her pass

A brutal bulldog coupled with an ass.

BUT EVEN Walpole was able to recognize the literary merit of Johnson’s fellow Club member, Edward Gibbon. After he had read the first volume of Gibbon’s Decline and Fall, which appeared in 1776, the same year as Thomas Paine’s and Adam Smith’s great works, he wrote the author a congratulatory letter, asking how he could “…know so much, judge so well, possess your subject and your knowledge and your power of judicious reflection so thoroughly, and yet command yourself and betray no dictatorial arrogance of decision?” Only the next sentence could be considered a two-edged compliment: “You have unexpectedly given the world a classic history.”

Damrosch aptly mentions the reaction of a young, Victorian “army officer in India” upon reading Gibbon’s masterpiece more than a century after its publication:

I was immediately dominated both by the story and the style. All through the long glistening middle hours of the Indian day, from when we quitted stables till the evening shadows proclaimed the hour of polo, I devoured Gibbon. I rode triumphantly through it from end to end and enjoyed it all.

So wrote the youthful Winston Churchill who, in time, would not only make history himself but master the handling of both “the story and the style” of Cleo’s art. This throw-away vignette is one of many reminders in Damrosch’s masterful compilation, of how Johnson’s circle shaped not only its own age, but future ones as well.

Sadly, Boswell, who loathed Gibbon, seems to have paid scant attention to his participation in Club conversations so that few of his words are preserved in either his Life or his diaries. One of the main reasons for Boswell’s dislike of Gibbon may have been what he considered the latter’s atheism since Boswell, though a dedicated whoremonger, also considered himself a sincere believer and enjoyed wallowing in transient repentance almost as much as he reveled in his countless couplings with streetwalkers, sometimes literally on the street. Gibbon, a pudgy piglet of a man, was not much to look at. Of him, Boswell wrote, “I think ridicule may be fairly used against an infidel; for instance, if he be an ugly fellow, and yet absurdly vain of his person.”

Which Gibbon undeniably was. Reynolds—who, as a society artist catering to the carriage trade, knew well how to flatter even his homeliest sitters—created one of the best-known likenesses of Gibbon. Years later, Charles James Fox, a member of the Club, and a leading Whig politician who was anything but a prude or a religious zealot, caught Gibbon gazing adoringly at his own portrait,

…which hung over the chimney piece—that wonderful portrait in which, while the oddness and vulgarity of the features are refined away, the likeness is perfectly preserved. Less kindly observers said that Gibbon’s pudgy face resembled the rear end of a baby.

By contrast, Gibbon’s prose was both stately and symmetrical. Like Johnson, he wrote in a Latinate, periodic style, each sentence building into the next and each paragraph strengthening the composition as a whole. “It has always been my practice,” Gibbon declared, “to cast a long paragraph in a single mould: to try it by my ear, to deposit it in my memory, but to suspend the action of the pen until I had given the last polish to my work.” It gleams to this day. What Gibbon did painstakingly and by rote may have been more instinctive or intuitive in the case of Johnson, especially since, for most of his life, he was writing on commercial deadline and depended on his writing to pay for the food he ate and the roof over his head. But the result is the same: eloquent, elegant, sonorous but often very forceful well-rounded periods deployed for a purpose and building to a magnificent climax.

In the Decline and Fall, all we have to go on is fragments of ambiguous evidence from the distant past. Sometimes the evidence seems convincing, but Gibbon reminds us that we still have to think about who wrote it down back then, and what their agenda might have been. Much of what we think we know about many characters in the story comes from enemies who hated them. Gibbon’s great achievement is to help readers to construct the narrative along with him.

Had Gibbon published Decline and Fall before joining the Club, he would probably have been blackballed. For members like Boswell and Johnson, Gibbon’s expressed skepticism of claims that the rise of Christianity “could only be explained by miraculous divine intervention” was blasphemy, pure and simple. Both Boswell and Johnson referred to Gibbon as an “infidel.” This was absurd. While Gibbon did not ignore or dismiss the significance of Christianity, he treated “the history of the Church as simply one historical phenomenon among many, not as the key to the meaning of history itself.” To Gibbon, there was nothing miraculous about the rise of Christianity. He attributed it to “secondary causes,” including, in Damrosch’s inventory, the “proselytizing zeal of early Christians, their promise of immortality, their ‘pure and austere morals,’ and their organization as a militant body within the larger society.”

All good debating points, but they beg the question. If Christianity—and even the “secondary causes” of its triumph—were not in some way unique or uniquely inspired, why did Christianity so quickly and widely outpace dozens of other now-forgotten religious movements and cults and win over most of the developed Western world and the Byzantine east by prayer and persuasion rather than by compulsion and the sword? Even Gibbon stated wonderment at how, at the Battle of Tours in 732 AD, the Moslem wave of armed conquest was turned back “‘by the genius and fortune of [Charles Martel]’ in ‘an encounter which would change the history of the world.’” He even speculated on what might have happened if the Moors had won:

The Arabian fleet might have sailed, without a naval combat, into the mouth of the Thames. Perhaps the interpretation of the Koran would now be taught in the schools of Oxford, and her pulpits might demonstrate to a circumcised people the sanctity and truth of the revelation of Mahomet.

DAMROSCH’S CONSPECTUS abounds in inspired descriptions and, just as importantly, wide-ranging, judiciously chosen quotations from both Club members and a wide array of their contemporaries, plus intelligent commentary by subsequent writers and scholars. Throughout, Damrosch serves as a learned but never pedantic navigator through complex lives, relationships and works of art both literary and visual. Indeed, one of the most notable achievements of his book is his inspired choice of illustrations which he often alludes to in his narrative, everything from Reynold’s portraits to penny prints, all offering insights into his characters, the age they dwelled in, and the traces of both their work and their world that still shape our lives. He deftly wheels in supporting members of the cast such as Fannie Burney, Hester Thrale Piozzi, Richard Brinsley Sheridan and so many other colorful characters. All are treated with informed fairness and all are brought fully to life. Like Samuel Johnson’s Lives of the Most Eminent English Poets, Damrosch’s work pulls together an extravagant range of characters—some motley, some magnificent—and all of them brimming with life and color.

His book’s structure is a little haphazard, since his narrative must move backward and forward in time and place, and focus on different people in different periods, but the pudding never loses its theme. The overall effect is of a stunning series of inspired lectures accompanied by magnificent slides, all combining to deepen our understanding of its subject matter and our appreciation both of its intrinsic appeal and its contemporary relevance. Damrosch is a conscientious master of period minutiae. Only one bit of botched detail springs to mind. In his description of a London street scene, Damrosch describes some of the services being offered at “The New Bagnio,” a then-trendy Turkish bath of sorts. One of them, “cupping” is defined as “medical bloodletting,” which it was not. The practice of cupping is designed to relieve a variety of complaints by applying heated glasses, usually to the patient’s back or chest. The heat of each glass, acting on the air within it, creates a mild vacuum and stimulates sluggish circulation, pulling more blood to outer layers of the skin, usually creating a healthy flush. For a period in the eighteenth and nineteenth centuries, it enjoyed the kind of vogue we now see with acupuncture. “Bleeding” was an entirely different procedure involving opening major veins and actually drawing large amounts of blood. With bleeding, the result could be fatal, as may have been the case with George Washington who went to bed with a serious cold rendered even more lethal by repeated and copious bleedings. Cupping, on the other hand, could have done him no harm and might actually have provided some relief.