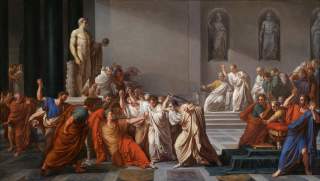 This sort of high-minded positioning and idealized self-promotion did not prevent the young Brutus from using positions of public trust to practice a lucrative sideline in usury while serving in Cyprus and Cilicia, a fact not lost on his sometime mentor and occasional critic. While admiring the younger man’s intelligence and eloquence—Cicero himself being the greatest orator of the age—Cicero was always faintly ambivalent about the inner workings and motivations of his rising protégé.

TEMPEST DEFTLY chronicles the ups and downs of this historic relationship. Particularly valuable in this connection are Cicero’s letters to his trusted old friend, Atticus, in which he alternately praises and criticizes Brutus, sometimes doing both in the same letter. The correspondence between Cicero and Brutus himself is also revealing and, in the case of the early eighteenth-century British historian Conyers Middleton, led to the conclusion that there was a central contradiction or inconsistency in Brutus’s character quite out of keeping with “the noblest Roman of them all.” This inconsistency in his character, wrote Middleton,

“would tempt us to believe that he was governed in many cases by the pride and haughtiness of his temper, rather than by any constant and settled principles of philosophy, of which he is commonly thought to be so strict an observer.”

Writing later in the same century, Edward Gibbon took an even dimmer view of Brutus as would-be savior of the Roman Republic. In an essay less familiar to most readers than his Decline and Fall, and only published posthumously, Gibbon asserted,

“Neither as a statesman nor as a general did Brutus ever approve (sic) himself equal to the arduous task he had so rashly undertaken, of restoring the commonwealth; instead of restoring it, the death of a mild and generous usurper [Julius Caesar] produced only a series of civil wars, and the reign of three tyrants whose union and whose discord were alike fatal to the Roman people.”

In other words, even if the job Brutus undertook was a commendable one, he simply wasn’t up to it. This is a harsh verdict, but one that would seem to be justified by the historic results. Where Brutus did show an early and consistent pattern was in his program of calculated self-promotion. We should see him, Tempest writes, “not just as eloquent, cultured and an outspoken defender of the res publica, but as an active manipulator with his own interests, an independent operator who knew what he wanted and how to get it.”

IN FAIRNESS to Brutus, he lived in a period of political flux, when even the most principled of public men could find themselves conflicted and perplexed. Much as one might want to do the right thing, it wasn’t always clear what that thing was. In a tormented passage from one of his letters to Atticus, Cicero posed the problem in a series of hard questions, without pretending to have an answer to them. Some of today’s more hysterical celebrity threats to move to Canada or take to the streets after the election of Donald Trump could almost have been prompted by the questions posed by Cicero, even though the state of the American republic today is scarcely comparable to that of the Roman Republic in the first century BC:

In his later years, Cicero usually opted for sitting it out rather than emigrating or joining the scrimmage, although that didn’t stop him from being killed by a vengeful Marc Antony in the end. Brutus was more actively engaged in the fray, first siding with Pompey against Caesar at the outset of the civil wars, then switching sides to Caesar and accepting numerous honors and awards from him before turning on him and, ultimately, plunging a dagger into him.

Perhaps the most intensely personal manifestation of Brutus’s calculating approach to public life involved a dramatic change in his private life. Shortly after returning to Rome from a stint as governor of Cisalpine Gaul, where he had been appointed by Caesar and, by all accounts, performed his duties honorably and efficiently, Brutus abruptly divorced Claudia, his loyal, irreproachable wife of a decade. Many people were baffled by this sudden abandonment of a loyal spouse, although the fact that her father, the wealthy and once-influential Appius Claudius, had picked the losing side in the late civil war and then died may help to explain matters.

But there could also have been a romantic angle since, “as insiders already knew, a second bride was waiting in the wings.” She was the devoted Portia, familiar from Shakespeare’s Julius Caesar. Was it love, a cynical political move, or an impure blending of both? “As always,” Tempest observes, “several theories have evolved over Brutus’ decision to marry Porcia,” the daughter of Cato the Younger and the widow of Bibulus, both inveterate foes of Caesar.

“have sought to explain the seemingly inexplicable move and the speed with which the marriage was conducted by resorting to the idea that it was a genuine love match. Others see in Brutus’ marriage firm evidence of his sense of obligation to the dead Cato, and even more a move away from Caesar.”

In support of this one could cite the reactions of Servilia, Brutus’s mother, and Portia, who “did not take fondly to one another. . . . When we remember that Servilia was the friend and prior lover of Caesar, while Porcia was Cato’s daughter, the bad relations between mother and daughter-in-law are not altogether surprising.” But viewed from another angle, “Brutus had forced two diametrically opposed women each to be bound to him in terms of unfading loyalty—as mother and as wife.”

And there’s the rub. Tempest concedes,

“we cannot exclude the possibility that Brutus’ marriage to Portia was politically motivated after all. In fact, it was perfectly consistent with Brutus’ position in 45 BC as the natural heir to Cato’s circle [but also] as a champion of Caesar’s [attempt to fashion a new, conciliatory] res publica.”

Thus, when Caesar returned to Rome victorious in the late summer of 45 BC, Brutus had every reason to feel himself well-placed for a secure political future, convinced that “he had made the right decision in accepting the dictator’s pardon.” Yet, less than half a year later, Caesar would be stabbed to death on the senate floor and Brutus would be one of the lead assassins.

FROM THIS point on the detailed historical evidence is more plentiful and the outline of events is more familiar to modern readers. Caesar thrice refuses a kingly crown, offered by Marc Antony on the Lupercal. He assumes ever increasing powers and his supporters pile ever more slavish titles and honors on him. He even makes light of solemn republican institutions. When one of the two consuls he had hand-picked died on the very last day of the year, he frivolously appointed a new consul to fill the vacancy for just one afternoon, an otherwise forgotten notable of the day named Gaius Caninus Rebilis. Thus, quipped Cicero, engaging in a bit of black humor, “during the consulship of Caninius, you should know that no one had breakfast,” and “not one crime was committed.”

Perhaps most importantly, Caesar accepted the title of dictator perpetuo (dictator for life), which, while not establishing him as hereditary monarch, gave him a lifetime lease as absolute ruler of Rome. It was a lease that only death could break.

We may never know exactly what turned Brutus from one of Caesar’s most favored and presumably loyal subordinates into a leading conspirator against him. One can be fairly sure, however, that, to a man whose ancestral identity was tightly bound to the ideals—real and imagined—of the Roman Republic, and one who had proudly marketed himself as the heir to an ancestral history of devotion to libertas and resistance to tyranny, Brutus would have felt intense peer-group pressure to throw in his lot with the conspirators. In the tight, politically incestuous circle of the old republican oligarchy, he also may have assumed that the intensity of the feeling against Caesar was more widely shared outside that privileged elite than it really was. Whatever the reason, when Caesar, ignoring repeated omens and warnings, insisted on paying his ceremonial visit to the Senate during the ides of March, Brutus was there and did not hesitate to strike.

Even as assassinations go, it was a particularly messy affair. Like sharks in a feeding frenzy, some of the conspirators accidentally stabbed each other in their hysterical attempts to be in on the kill. Brutus himself received a few flesh wounds at the hands of his comrades, symbolizing, perhaps, that assassination is often a double-edged political weapon.