Hit Hezbollah in the Wallet 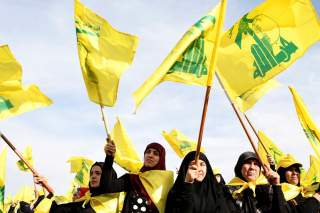 This week marks the twentieth anniversary of the U.S. designation of Hezbollah as a foreign terrorist organization. As Congress gears up to consider a new Hezbollah sanctions bill, it should carefully consider one number: $1 billion. That is roughly Hezbollah’s annual budget for this year. Hezbollah was responsible for the deadliest terrorist attack against U.S. citizens until 9/11, and has conducted bombings against civilians in Europe and the Americas. Despite the UN ordering Hezbollah to disarm in 2006, the group threatens Israel with an enormous rocket arsenal, and fights on behalf of the murderous Assad regime in Syria. A peaceful future in the Middle East requires bankrupting Hezbollah.

As we lay out in our recent report on Hezbollah’s finances, there are four actions the U.S. should pursue right away to disrupt the group’s finances.

Hezbollah runs a massive criminal empire, working hand in glove with Latin American drug cartels and leveraging front companies. The first step in targeting Hezbollah’s finances is to update and expand sanctions designations on the group’s networks and entities, both inside and outside of Lebanon. It’s quite common for people running sanctioned companies to start up new companies to evade authorities.

Hezbollah currently makes tens of millions of dollars from on six continents, much of it from drugs. According to former DEA operations head Michael Braun, Hezbollah runs “the most sophisticated money laundering scheme . . . we have ever witnessed.” Treasury, law enforcement and the intelligence community will need to ramp up efforts to identify and re-sanction entities that have simply changed their names.

Second, the United States must support countervailing influences in Lebanon, so as to not cede the country to Hezbollah. When the Hezbollah International Financing Prevention Act was passed in 2015, Lebanon’s central bank played a crucial role, stabilizing the banking system while shutting down perhaps hundreds of Hezbollah-related bank accounts. U.S. interests are not served if new sanctions collapse the Lebanese banking sector; if a complete power vacuum forms in Lebanon, it will surely be filled by Hezbollah and Iran. Thus, the Treasury Department needs to ensure it works closely with Lebanon’s central bank, which has an incentive to rein in Hezbollah activity in the financial sector if the country’s banking sector is to stay connected to the global financial system.

The United States should also undermine Hezbollah’s local base of support by exposing the hypocrisy of a supposedly pious Muslim organization engaged in crime and drug trafficking. Hezbollah denies it profits from drugs, but its leadership accepted (but kept secret) a 1980s fatwa allowing for the group to sell narcotics to non-Muslims. This illicit activity must be exposed. The new Hezbollah sanctions legislation addresses this point in part by labeling Hezbollah a “transnational criminal organization,” shining a spotlight on the group’s extensive criminal activities, like drug trafficking, that contradict the group’s moral claims.

Third, it’s time to end the European Union’s fiction that Hezbollah can be divided into a “military wing” and a “political wing.” Though the EU has only sanctioned the “military wing,” the two wings are one and the same. As Hezbollah’s second in command has said, “We don’t have a military wing and a political one.” There are hundreds of active Hezbollah members in Germany alone who may be raising funds for the group. U.S. diplomats need to raise and push this issue again, at the highest levels of U.S.-EU relations. Further, the United States should force a vote on sanctioning Hezbollah at the UN Security Council, if only to embarrass Russia or any other country that deigns to block such a commonsense measure.

Lastly, any effort to cripple Hezbollah’s finances will run through Tehran. Iran provides an estimated 70 to 80 percent of Hezbollah’s budget, largely sent to the group “in suitcases, not through banks,” flown to Lebanon or Syria, where Hezbollah operatives drive it across the border into Lebanon. A Hezbollah counter-finance strategy without addressing Iran is like devising a basketball strategy to beat the Cleveland Cavaliers without stopping LeBron James.

To target Hezbollah’s funding, lawmakers need to understand that most of Hezbollah’s income comes from parastate entities controlled by Iran’s supreme leader, Ayatollah Ali Khamenei. Khamenei skims off the top of these companies’ revenue to fund Hezbollah. Thus, Iran’s funding for Hezbollah doesn’t show up as a line item in the country’s budget.

Iranian funding has ebbed and flowed over time, largely due to two factors: oil prices and international sanctions. Washington’s hands are not bound. The Joint Comprehensive Plan of Action (JCPOA) dealt only with nuclear proliferation, and thus secondary sanctions levied because of the country’s support for terrorism are fair game. Secondary sanctions would apply financial restrictions to any non-American firm doing business with Iran that also wants to work with U.S. entities. Knowing that the supreme leader is drawing from entities he controls to fund Hezbollah, the United States should invest in better understanding these cash flows, and should then directly target Hezbollah by imposing secondary sanctions on the entities providing the funds from which the supreme leader is drawing.

The first of the Khamenei-controlled conglomerates to be investigated should be the Execution of Imam Khomeini’s Order (EIKO). EIKO’s expansive business holdings were worth an estimated $95 billion in 2013, and secondary sanctions on the entity were lifted as a sweetener for Khamenei to agree to the JCPOA. To avoid multilateral pushback, the United States should not sanction EIKO in its entirety, but should rather issue secondary sanctions against the subsidiary companies providing the money Khamenei is using to fund Hezbollah.

Hezbollah is a dangerous Iranian proxy that traffics drugs, supports the murderous Assad regime and threatens the well-being of Lebanon itself. Destroying the group’s ability to fund its operations inside and outside of Lebanon is of paramount importance to ensuring regional stability. Bankrupting the group is in the U.S. national interest, and should be embraced by both sides of the aisle in Congress. By pursuing a four-step approach to disrupting the group’s funding, the United States can help stabilize the region and possibly prevent another war.

Yaya J. Fanusie is the director of analysis at the Foundation for Defense of Democracies’ Center on Sanctions and Illicit Finance, where Alex Entz is a research analyst. Follow Yaya on Twitter @SignCurve, and @FDD.