Holding the Line in Aleppo? 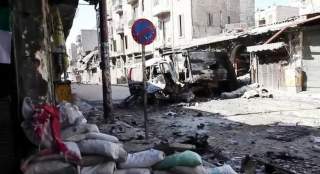 The image of Omran Daqneesh, a five-year old Syrian boy pulled from a damaged building in rebel-held Aleppo covered in dried blood, has captured the world’s attention. Omran Daqneesh shows us the human cost of failing to enforce red lines. A “red line” is an unequivocal threat designed to get the other side to back down. But, for President Barack Obama, they work in the reverse: every time he draws a “red line,” he backs down.

In 2012, President Obama drew a “red line” against chemical warfare in Syria.

At the United Nations in 2015, President Obama drew another “red line” that threatened the use of force if chlorine weapons were used in Syria. Once again he backed down.

During the current siege of Aleppo, the UN’s Special Envoy for Syria, Staffan de Mistura, stated that it appears that Syrian President Bashar Assad’s regime has used chlorine weapons against a rebel-held neighborhood. The Obama Administration has responded with a press release that did not threaten any consequences. U.N. Ambassador Samantha Power denounced the “horrific and continuous use of chemical weapons by Syria” without specifying whether any action would be taken against Assad.

Will Barack Obama ever enforce any of the “red lines” he has drawn against Syria’s use of chemical weapons?

In September 2012, President Obama said in a news conference, “We have been very clear to the Assad regime, but also to other players on the ground, that a red line for us is we start seeing a whole bunch of chemical weapons moving around or being utilized. That would change my calculus. That would change my equation.” With those few words, Obama mortgaged our reputation and credibility. But after Bashar Assad killed over 1,000 civilians with sarin gas in an attack outside of Damascus in 2013, Obama defaulted on his obligation. He wrecked our credibility.

Russian president Vladimir Putin swooped in with a diplomatic solution that supposedly disarmed Syria of its chemical weapons stockpile. Yet, the Assad regime continued using chemical weapons. A new U.N. report is likely to attribute a number of chemical weapons attacks over the past three years to the Assad regime. In March 2015, the Obama administration sponsored and passed a UN Security Council Resolution that threatened the use of force if chlorine weapons were used in Syria. A March 2016 report stated that 161 chemical weapons attacks were responsible for the deaths of nearly 1,500 civilians and 14,581 injuries. It estimated that nearly one-third of these used chlorine gas.

A majority of the attacks occurred after the 2015 UN Security Council resolution that threatened the use of force in retaliation for the use of chlorine gas against civilians. These are the costs of failing to enforce red lines. After the recent attack in Aleppo, will President Obama finally enforce the “red line” he drew in 2012?

President Obama’s actions in Syria in 2013 damaged America’s ability to make credible threats to its enemies and dependable promises to its allies. In an interview with Foreign Policy, former secretary of defense Chuck Hagel said of Obama’s August 2013 decision to back down, “There’s no question in my mind that it hurt the credibility of the president’s word when this occurred.” Hagel told Foreign Policy that his counterparts throughout the world told him that Obama’s decision to erase his “red line” shook their confidence in the forty-fourth president.

Both history and professional experience on the House Foreign Affairs Committee has shown me that credibility counts in foreign policy.

First, when leaders break their commitments, it demonstrates that they are incapable of managing a country’s foreign policy. Immediately after the Munich Crisis, it is true that then prime minister Neville Chamberlain was greeted with parades and public applause. However, when Hitler’s true colors were revealed, history was less kind to him. Today he is regarded as one of Britain’s worst prime ministers, and the critics of Munich, starting with Winston Churchill, are seen as having been far-sighted.

Second, when leaders back down, it hurts the reputation of the nation in the eyes of its enemies and its allies. To return to the pre-World War Two period, the crises over the Rhineland, the absorption of Austria and Munich demonstrated that weakness begets aggression. When leaders fail to make good on their threats, they will only encourage the most ruthless actors in the international system.

We are learning the same lesson all over again when it comes to the nuclear deal with Iran. A series of hearings held by the House Foreign Affairs Committee have shown that despite the diet of carrots that the Obama administration has fed the regime in Tehran, Iran remains a steadfast supporter (and exporter) of terrorism, an enemy of Israel, and a serial violator of human rights. After the nuclear deal was concluded, our allies throughout the Middle East felt the U.S. had abandoned them.

When faced with credible threats to use force, aggressors back down. During the Cold War, Soviet leader Nikita Khrushchev issued a series of threats over Berlin. When the Eisenhower and Kennedy Administrations refused to back down, Moscow blinked. When Khrushchev initiated the Cuban Missile Crisis, Kennedy put a naval quarantine in place around the island and demanded that the nuclear-tipped missiles be removed. Again, Moscow blinked, and within a year Khrushchev was removed from office by the Politburo for his recklessness.

Former defense secretary Hagel said, “A president’s word is a big thing, and when the president says things, that’s a big deal.” (We should add prime ministers and other heads of government and state to that list as well.) Anytime a leader draws a red line, she/he puts their country’s reputation for resolve on the line. Both the public and the international community watch to see if a leader is up to the task of managing the state’s foreign policy. Upholding or erasing “red lines” signals to a state’s enemies and allies whether it will back up its commitments.

After having decimated our credibility, how can we expect our allies to trust us? How can we expect our enemies to respect our threats? The recent progress being made against ISIS in Manbij, Sirt and on the outskirts of Mosul is welcome. However, it is important to remember our reputation and credibility is critical to ultimately defeating the Islamic State. The Assad regime recently bombed the city of Hasakah, home to American military personnel and our Kurdish allies battling ISIS. A Pentagon spokesman said such actions were not "well advised." A day later, the Syrian Air Force targeted Hasakah again. These are the costs of repeatedly backing down from “red lines.”

In 2012, President Obama drew a “red line” over Syria’s use of chemical weapons. He backed down, undermined America’s credibility and opened the door to Russian intervention in the country’s civil war. He drew another “red line” in 2015 at the U.N. Security Council. He threatened to use force if chlorine weapons were used in Syria. He backed down a second time. Amid reports that the Assad regime has used chlorine weapons in Aleppo, will the Obama administration honor its “red lines”? Or, will it just back down again?

For some, concepts like “red lines,” reputation and credibility are abstractions straight from the Beltway. In order to understand the cost of failing to honor a “red line,” think of the image of five-year old Omran Daqneesh. Then, think of the hundreds of thousands of men, women, and children just like him.

Rep Steve Chabot is the Chairman of the Small Business Committee in the U.S. House of Representatives. He is also a member of the House Foreign Affairs and Judiciary Committees. He represents the First District of the State of Ohio.