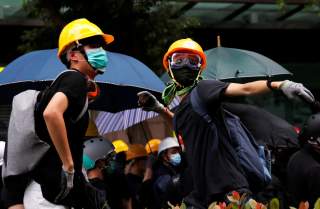 Defying stern warnings from both the local government and Beijing, people in seven districts in Hong Kong—most notably teachers, airport workers, and civil servants—participated in a general strike Monday, shutting down portions of the territory. For instance, more than a hundred flights were cancelled.

The strike followed weeks of sometimes violent protests in the territory, a semi-autonomous region of the People’s Republic of China. Youthful demonstrators over the weekend surrounded and attacked police stations, and enraged residents drove riot police from their neighborhoods.

Roving protesters, dressed for urban combat, created a series of confrontations across the territory, even closing the main tunnel linking Hong Kong Island with the rest of the territory. A beleaguered police force, demoralized and fatigued, was unable to keep up with the mobile bands of radicalized youth.

Some of the protest messages were impossible to miss. In Wanchai’s Golden Bauhinia Square, a magnet for tourists from other parts of China, kids spray-painted a statue with provocative statements such as “The Heavens will destroy the Communist Party” and “Liberate Hong Kong.”

In Hong Kong, revolution is in the air. What started out as an unexpectedly large demonstration in late April against a piece of legislation—an extradition bill—has become a call for democracy in the territory as well as independence from China and the end of communism on Chinese soil.

Almost nobody thinks any of these things can happen, but they forget that Chinese rebellions and revolutions often start at the periphery and then work their way to the center. The Qing dynasty of the Manchus, the last imperial reign, unraveled from the edges, as did others.

Hong Kong, perched on the edge of the Asian continent far from the center of communist power in Beijing, may be where the end of Chinese communism begins.

How could the mighty Communist Party of China fall?

Xi Jinping, the Chinese ruler, knows that very few in the rest of China, the “mainland” as it is called, sympathize with the Hong Kong protestors, especially because they challenge “China,” as the party likes to call itself. Yet the demonstrators in Hong Kong have succeeded at pushing their government around, almost at will, forcing Carrie Lam, the chief executive of the Hong Kong Special Administrative Region, to “suspend” consideration of the extradition legislation.

And that is why Xi must be concerned. Mainland residents have grievances of their own, especially now that the economy is crumbling fast, and might become inspired to treat their own leaders roughly.

Hong Kong protestors, worryingly for Xi, seemed determined to spread their provocative message. Recently, they have been targeting mainland tourists to Hong Kong, seeking to inform them of their grievances. Demonstrators have, for instance, gathered in places where Chinese visitors congregate, including a rail station, and have used the AirDrop app to spread protest posters to mainlanders.

Perhaps in response, Beijing late last month stopped trying to prevent those “inside the Great Firewall” from knowing about the Hong Kong disturbances and instead attempted to tar the protestors by publicizing their violent acts.

Are mainlanders encouraged by the Hong Kong “riots,” as Beijing calls them? In the first week of July, up to ten thousand residents of Wuhan, the capital of Hubei province, took to the streets for days to protest a proposed waste-incineration plant.

The mass demonstration there did not spread, as other protests in China have in the past, but in the future cascading disturbances could overwhelm an already troubled political system. As Arthur Waldron of the University of Pennsylvania told the National Interest, “the disintegration of the People’s Republic of China is now under way.”

Xi might be able to end, or at least tamp down, the Hong Kong protests by forcing Lam to capitulate—formally “withdrawing” the extradition bill from consideration and resigning—but he is unlikely to do that. He does not want anyone, especially mainlanders, to think they are also able to overpower their leaders.

In an especially tone-deaf press conference Monday, Lam, standing next to eight grim-faced ministers, made no further concessions, either symbolic or substantive, as she struck all the wrong notes if she was trying to calm the situation in her embattled city. Her stern and sometimes ominous words—Lam warned the territory was on the “path of no return”—seemed aimed at an audience of one: Communist Party General Secretary Xi Jinping.

Xi, it appears, will keep Lam in power. Her resignation, demanded by many, would undoubtedly trigger calls for universal suffrage for the election of a successor. Lam was “elected” in 2017 by the Election Committee, a body of only twelve hundred members in a city of more than seven million. Due to various mechanisms, the resulting “small-circle election” effectively gives Beijing a decisive voice in choosing the chief executive.

The demand for an all-inclusive electorate in fact started seventy-nine days of wide-scale protests in 2014, the “Occupy Central” demonstrations.

That protest, sometimes called the “Umbrella Revolution,” did not look like a revolution—sustained action to change the form of government—but today’s protests are starting to do so. Popular attitudes have visibly hardened this year as Hong Kong residents have taken the view that this is, as they say, the “last stand” for their society. There are traditional pro-Beijing elements in the city, such as the triads and triad-like organizations, but few in the Hong Kong mainstream now trust China. In the middle of June, one pro-democracy march drew an estimated two million people.

At the end of that month, Ho-Fung Hung of Johns Hopkins University noted that the authorities then thought they could outlast the protestors but he disagreed with their assessment, believing the demonstrations could last until September, the fifth anniversary of the Umbrella movement, or even to October 1, when Beijing plans to celebrate the seventieth anniversary of the founding of the People’s Republic.

Now, Hung looks prescient. There is no end to the demonstrations, now in their ninth-straight week, in sight.

Sustainability is the key for the protestors if they want to win freedom from China. “They keep saying ‘be like water,’” Michael Yon, the American war correspondent and author, told the National Interest over the weekend, noting young protestors are modeling themselves after martial arts legend Bruce Lee. “I keep telling them be like Poland. Never quit and you can actually be free. Maybe. But never quit.”

Yon, now reporting from the streets in Hong Kong, is on to something. Hong Kong people may be able to inspire just enough disgruntled mainlanders to shake their regime to the ground. If one thing is evident after months of protests, the youthful pro-democracy demonstrators are determined, as are millions of residents of the territory.

In a contest where neither side will concede, anything can happen. Chinese regimes, let us remember, fray at the edges and then sometimes fall apart. It could happen this time as well.