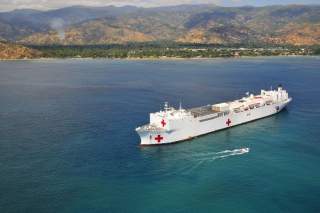 As U.S. defense budgets continue to shrink, policymakers must use innovative strategies to project power worldwide. Power projection takes two forms: soft and hard power, the carrot and the stick. American policymakers have tended to neglect the former. Indeed, U.S. soft-power programs have been on the decline over the past half-century. This is to our detriment, as soft power can potentially pay huge long-term strategic dividends when utilized correctly. But winning the hearts and minds of a population isn’t easy. How can we foment pro-U.S. sentiments abroad?

Providing medical care in foreign countries is a great way to improve the U.S. image abroad. The U.S. Navy hospital ships Mercy and Comfort are prime examples of an effective soft power program. These hospital ships provide medical care to impoverished communities worldwide. The USNS Mercy is itself one of the largest trauma facilities in the United States. The Mercy hosts 1200 medical personnel, maintains up to five thousand units of blood, has a dozen operating rooms, and is equipped with CT scanners, radiology facilities, and a thousand patient beds.

Hospital ships have several unique advantages over other aid-delivery mechanisms. Most importantly, hospital ships are highly visible. The appearance of several hospital ships with a whole host of American doctors and state-of-the-art medical technology is soft power’s version of shock and awe. Healing the sick and treating the wounded may win more hearts and minds, especially in the short run, than putting up an electric grid or building a road. Furthermore, recent controversies surrounding USAID make hospital ships a particularly attractive soft-power weapon. A better-funded hospital ship program could produce positive effects that would be felt for decades.

Unfortunately, in our current defense-budget-cutting environment the U.S. Navy’s hospital ship program is likely poised to stagnate or downsize rather than grow. Soft-power programs are often first in line to get scaled back during budget-cut showdowns. While the Navy has a long history of soft-power projection, hospital ships justifiably take a backseat to the Navy’s primary mission of “maintain[ing], train[ing] and equip[ing] combat-ready naval forces capable of winning wars.” Hospital ships already get a pittance for funding and spend most of their time moored up as floating museums. This is characteristic of all U.S. soft-power programs. In 2003 the U.S. spent a measly $150 million on public diplomacy in Muslim countries. Over time, this has led to a situation described by Harvard professor Joseph Nye as “the world’s only superpower…outgunned in the propaganda war by fundamentalists hiding in caves”.

The real reason behind this phenomenon is twofold: Soft power sounds like entitlement programs for foreigners to some in our electorate, and foreign aid isn’t as appealing as equipment like the F-35. Many believe soft-power programs are simply the product of pipe dreams cooked up by dovish types that want to hug our enemies to death. Quite the contrary. Truly strategic thinkers can use soft-power programs to win the long game.

Hard and soft power need to be used in tandem. Policymakers need to maximize the strategic benefit that we get for our tax dollars. A larger hospital-ship program is appealing due to the large bang for the buck we stand to reap. The national-security benefit we get out of an extra ten nuclear weapons may be less than using those tax dollars for hospital ships.

In 2010 and 2012, the U.S.N.S. Mercy deployed to Southeast Asia for five-month tours, spending roughly two weeks in Vietnam, Cambodia, Philippines, Indonesia, and Timor-Leste. Imagine if this program’s funding was increased, and six more hospital ships were added to the Navy’s annual deployment to Southeast Asia, the Pacific Partnership. We would be able to drop figurative soft power bombs to all parts of a targeted country long before engaging with them on economic or strategic issues. An extensive hospital-ship deployment could influence negotiations over contentious issues like the Trans-Pacific Partnership, the regional free-trade agreement being negotiated between Pacific Rim countries which represent 40 percent of global GDP and 26 percent of global trade.

Critics of the U.S. Navy hospital-ship program cite the high cost per patient treated as evidence of poor returns on our investment. Yet the precise number of individuals treated isn’t the right way to measure success. Success is measured by the number of people made aware of the aid program—a feat accomplished by each hospital ship's contingent of reporters and journalists. Similarly, an improved hospital-ship program won’t make people pick up rifles and fight our wars for us, or convince our opponents to stand down. But, as naval strategist James Holmes notes, that isn’t what soft power aims to do:

Such endeavors enhance a nation’s good name—which is what soft power is all about. It’s not about transactions in which donors exact rewards from beneficiaries. Humanitarian and disaster relief, then, are relatively—not absolutely—apolitical, selfless missions.

What hospital ships can do is push the moderate majority within foreign populations into our strategic fold. Extensive hospital ship deployments might prevent a situation that occurred in Chile, Mexico, and Turkey in March 2003, where “the United States [had] become so unpopular that being pro-American [was] a kiss of death [politically]”. Hospital ships would increase pro-U.S. sentiments and raise support for pro-U.S. elements in targeted countries.

Take the deployment of U.S. Navy forces and the hospital ship Mercy to South-East Asia following the 2004 tsunami, for example. U.S. disaster relief aid greatly increased favorable opinions of the U.S. among Indonesians. The percentage of Indonesians who have a positive view of the U.S. went from 15 percent in 2003 to 63 percent in 2009. The Pew Research Center’s Global Attitudes Project reported:

Only months after the devastating December 2004 tsunami that struck the Banda Aceh region and other parts of the country. Roughly eight-in-ten (79 percent) said that post-tsunami aid from the U.S. had improved their impression of America, and positive views of the U.S. more than doubled.

In light of Indonesia’s historic opinions of the U.S. military, that was a momentous shift. And it’s one with potential strategic significance. Not only is Indonesia incredibly important in ASEAN politics, but it also has the largest Muslim population in the world. The sight of American soldiers, doctors and volunteers working alongside Indonesians to rebuild their country will have long-lasting benefits for U.S. counterterrorism efforts, and pay strategic dividends for the United States in the long run.

Time and time again, U.S. disaster relief has correlated with huge increases in pro-U.S. sentiments abroad. The evidence is there. In 2013 U.S. disaster relief greatly increased Philippine support for the U.S. military and strengthened U.S.-Philippine bilateral relations following typhoon Haiyan. This same trend occurred in Japan after the 2011 earthquake and tsunami.

However, feelings of goodwill don’t last forever. It is no secret that public opinion ebbs and flows. Positive views of the United States can change rapidly, erasing the benefit that we reap from humanitarian deployments. While this is true, this is a reality for all forms of power projection. Influence and security aren’t durable goods, whether they’re brought by bombers or by aid trucks. The last decade has been an ample reminder of the limits of hard power. Soft power might be brought to bear on some of the long-term problems with which our hard-power efforts have struggled. While soft power should never be a major part of our defense budget, our policymakers may be missing out on sound strategic investments by limiting their vision to hard-power programs. Soft-power tools like hospital ships can foment pro-American feelings that undergird sustainable, robust strategic partnerships worldwide—and make the work of those who would do us harm harder. That’s the point of power projection, both hard and soft.