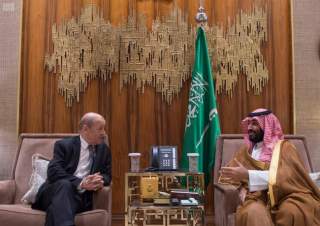 The recent upheavals by the King of Saudi Arabia, Salman bin Abdulaziz Al Saud, and his son, Mohammad bin Salman (widely referred to as MbS) represent more than just a purge and consolidation of their power but, much more profoundly, an auto-coup. Their actions constitute a coup because, if successful, they will result in changing the “constitution” of Saudi Arabia, which is its fundamental political and governance system. In this case the coup was executed not by the military but by the king and, under his own authority, hence the auto-coup. No doubt, the new regime and the old are both autocracies, but their fundamental mechanisms will have been changed, at least for the moment.

The events began with King Salman’s June replacement by MbS as Crown Prince, minister of the interior, and heir apparent Mohammed bin Nayef, a son of Abdulaziz the founder of the House of Saud. So far, all of the Saudi kings after King Abdulaziz Ibn Saud were chosen from among his sons. Moreover, they were chosen by some clandestine arrangement of unknown criteria, some approximation of consensus, among the many sons. Whatever the arrangement and the accompanying “compensation” to the losers, the result was accepted, perhaps until now.

If successful, the appointment of MbS and his ultimate succession would replace that system. The Kingdom is running out of sons of Abdulaziz so the system could not continue much longer. King Salman is eighty-one years old. A few sons of Abdulaziz remain alive, but they would be too old once King Salman passes away, and some will not even live to see that day. The succession had to pass to a new generation. There are many grandsons of Abdulaziz so the logical revision would have paralleled the existing system, the “constitutional” process, by some kind of similar consensus among the grandsons with the blessings of, as before, the Allegiance Council of senior Al Saud family princes and various religious and tribal leaders.

The abrupt replacement of Mohammed bin Nayef accelerated the biological clock. His replacement by MbS on the sole authority of the king was the first blow of the coup. True, the Saudi kings have had absolute authority, but that authority has never before been used to “subvert” the existing “constitutional” process. Moreover, MbS (who had been minister of defense) proceeded immediately to enlarge his role dramatically. First, with the apparent blessing of King Salman, he produced Vision 2030, a plan to privatize and diversify Saudi Arabia’s economy from oil rentals to a technology-based, globally integrated, twenty-first century system, including more freedom for women. Second, he inserted Saudi Arabia directly into the civil war in Yemen and against the Iranian-backed Shi’a Houthis on behalf of President Abdrabbuh Mansour Hadi and with former President Ali Abdullah Saleh, a one-time adversary who became an ally. All this even after a failed missile launch against Riyadh’s civilian airport and denying access to Yemen by land, sea and air. Third, with the UAE, he moved against Qatar, isolating it within the Gulf Cooperation Council (heretofore also working by consensus but under Saudi leadership) and then imposing a land, sea and air blockade because Qatar housed leaders of the Muslim Brotherhood and allowed its financial institutions to fund jihadists in various countries. Also, he subsidized Al Jazeera because it supported the Muslim Brotherhood and other Islamists who opposed the Gulf monarchies. Fourth, he was apparently behind the (temporary) resignation (delivered in Riyadh, not Beirut) of Prime Minister Saad al-Hariri, which threatens to upend Lebanon’s delicate confessionally based balance of power and authority. Fifth, he replaced Prince Mutaib bin Abdullah as the head of the Royal Guard responsible for protecting the House of Saud. That should have been the first warning. In an authoritarian regime the praetorian guard is critical to the security of the central personages, and the replacement of its head by someone of undisputed direct personal loyalty suggests their uncertainty, especially regarding the major changes that person intends to inaugurate. And finally, he caused the arrest and confinement of nearly a dozen princes and dozens of others (perhaps close to two hundred) in the elite—ministers, military officers, civilian officials, major businessmen and political dissidents—on charges of corruption. Irrespective of the veracity of the charges, this purge looks suspiciously like a traditional coup in which important figures in the ancien régime are arrested, charged and imprisoned to eliminate them. Indeed, King Salman gave a new committee, headed by MbS, the power to issue arrest warrants, disclose and freeze accounts, seize assets or prevent their transfer, and ban travel of those it accuses or suspects of corruption.

All of these moves could backfire on King Salman and MbS. King Salman’s massive investment in the new $10 billion King Abdullah Financial District in Riyadh has been disappointing so far. Vision 2030, including the commitment of MbS to “return” Saudi Arabia to a moderate polity with a moderate form of religion, social custom and greater pluralism, would rescind King Aziz’ agreement with the Wahhabi tribal groups in exchange for their original support in establishing the kingdom of the House of Saud. Vision 2030 would fundamentally change the sociopolitical-economic basis of Saudi Arabia, including the import of foreign labor and the liberalization of Saudi social norms. None of those things are welcomed by many in the conservative establishment, but they are welcomed by Saudi youth. The war in Yemen has been a huge economic and military drain and is not going well. Qatar has weathered the economic quarantine, the imposition of which has helped unify behind the Emir a previously more fractured population. Most important, will the remainder of the royal family acquiesce in the virtual imprisonment of the princes and the establishment, however benign, in the installation of MbS and the constitutional changes he has wrought? If so, what will be the new constitutional arrangement? A traditional, patrimonial monarchy with succession by primogeniture? And how stable would it be? Would Saudi Arabia turn into a more traditional autocratic regime supported by a large security force, installed by, loyal to, and reporting directly to an even more autocratic, unchecked monarch?

Saudi Arabia and the UAE are lynchpins for U.S. military and political interests in the Middle East, especially as a counter to Iran. Indeed, the Saudis have probably gone farther than the United States would like in its declaration that Lebanon is now totally dominated directly by Shiite Hezbollah, for which Hariri has become a fig leaf of neutrality, and is, as MbS has asserted, a tool of Iran and therefore at virtual war with Saudi Arabia and the Gulf monarchies. However, Al Udeid, the largest regional U.S. air base and U.S. hub for Afghanistan, Iraq and the Gulf is in Qatar. The squabble between GCC countries serves no U.S. interest. Still, President Trump immediately tweeted his support for the Saudis. MbS did not lead a coup against a democratic regime, so he triggered no automatic statutory U.S. sanctions against his measures.

President Trump should curb the impulse to take sides, at least publicly, and should support Secretary of State Rex Tillerson’s attempt to tamp down the escalating feud and mediate the dispute. Similarly, the United States should stay out of Saudi’s domestic shuffle for power—although it should encourage the efforts at Saudi economic diversification and social liberalization and many of the reforms of MbS (but not the apparent growing political restrictions). After all, along with many of the detained princes and ministers, Prince Mohammed bin Nayef was a staunch supporter of the U.S.-led security architecture in the Gulf and its main interlocutor within the Saudi establishment. So, support the MbS policies and attempt to restore amity among the allies but, with caution and vigilance, let the Saudi’s sort out their internal politics.

Gerald F. (“Jerry”) Hyman has been a senior advisor at the Center for Strategic and International Studies and president of its Hills Program on Governance since 2007. From 1990–2007, he held several positions at USAID, including director of its global Office of Democracy and Governance from 2002–2007. From 1985–1990, he practiced law at Covington & Burling in Washington DC, and he taught Anthropology and Sociology at Smith College from 1970–1985. He has a Ph.D. in Anthropology from the University of Chicago and a JD from the University of Virginia.