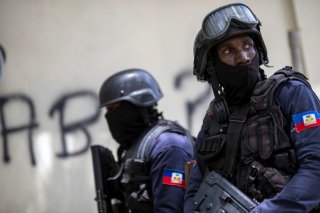 The Haitian government’s request for a U.S. peacekeeping presence, and the Biden administration’s more limited deployment of a small team of investigators and forensics experts, nonetheless sets in motion the now common response to crisis in Haiti—a multilayered response by the international community. The latter now has thirty-plus years of experience as well as a frustratingly narrow record of achievements. The introduction of U.S. and other peacekeeping contingents have in the past restored a modicum of street-level calm, and importantly, provided the setting for a restorative political process to emerge. However, the latter has rarely built deep and wide institutionalized roots. Instead, it has quickly succumbed to the vagaries of political authority—let alone governance, as well as a declining capacity to administer both law and order despite sustained, well-intentioned and costly international efforts. It is therefore helpful to catalog how an international response can best address Haiti’s ongoing crisis as well as mitigate the near certainty of future setbacks.

For starters, while some in Haiti as well as among Haiti’s international partners might have hoped for the rapid introduction of some U.S. peacekeeping units, it is critical to first get clarity on the so-far murky circumstances of President Jovenel Moïse’s assassination. Fears of a “Somalization” of Haiti and its impact on the region (particularly the Dominican Republic and the Bahamas) draw attention to the costly failures of past international interventions whose balance between regional security concerns, humanitarian impulses, and governance and development motives is never fully grasped. In the wake of the Moïse tragedy, there is a need to avoid an open-ended and inconclusive international security deployment. It will help greatly if the United States and others press their Haitian interlocutors for a determination of who is the government of Haiti—within three days after Moise’s killing, there were three claimants to the role of acting president. But this is really in the hands of Haitian political and civil society actors.

Second, a key lesson to be learned from recent international assistance efforts in Haiti amounting to billions of dollars (including the massive undertaking following the 2010 earthquake, let alone PetroCaribe funding—the discounted oil for social development program) is that a lot of it is uncoordinated, not to say duplicative, wasted, and often does not reach the intended Haitian beneficiaries. Some of the burdens of these colossal failures fall on the shoulders of Haitians themselves. All of that must change and will not be easy. Arguably, Haiti now faces a deep institutional crisis, implying that any effort designed to address Haiti’s political uncertainties must in tandem also engage the country’s key political and civil society actors in an urgent need for a baseline socio-political compact—none has existed over the past thirty-plus years of international community engagement in Haiti and is a key factor in the repeated crises.

Among the layers of security, political, and humanitarian needs, moving forward one can conceive of three arenas of critical international engagement: addressing Haiti’s political vacuum and struggles for political transitions; providing support to hold free, fair, transparent, and inclusive elections; and mitigating political and societal violence. As Haiti faces its worst crisis in decades, it is imperative that international engagement be structured so that it not just involves Haitian interlocutors but responds to their priorities. It is also a given that any international assistance must be able to manage and mitigate multiple crises simultaneously. Rising violence and kidnappings, the current political struggle for leadership, the Covid-19 pandemic, malnutrition and food shortages, the possibility of a refugee crisis, let alone the Atlantic hurricane season, can easily overwhelm Haitian national infrastructure or any international actor if left alone.

The working proposition is that a consistent and coordinated strategy by international actors, shaped with Haitian partners, can aim to effectively protect the citizenry, and strive for the harder goal of building good governance. Translating this into reality will not be easy. Some of these roles can be played by non-governmental organizations (NGOs) but in the immediate aftermath of the Moise assassination what is more pressing are key roles contemplated by governments and multilateral organizations.

To address the political vacuum and struggles for political transitions, rather than going far afield, the Caribbean Community (CARICOM), of which Haiti is a member, should be incorporated as a core actor, particularly to encourage negotiations among all key stakeholders. This includes Haiti’s diverse civil society community. For Haiti, this is an investment for the future toward mutually beneficial assimilation into the wider Caribbean regional community. This is also a further test of CARICOM’s mettle as a community of nations tied to virtues of democratic governance and the rule of law. This was recently highlighted during Guyana’s 2020 electoral crisis, where the body played a leading role as a key interlocutor. Although the circumstances in Haiti are more severe, it should invite the same mold and efforts from Haiti’s neighbors.

A second arena of likely contention will be Haiti’s need to hold free, fair, transparent, and inclusive elections. Both the United Nations and the Organization of American States (OAS) have in the past played leading roles in this arena—and both arrive at this new Haiti chapter with built-in deficits tied to a disappointing record of past achievements, let alone to their perplexing roles in connection with Moïse’s controversial push for constitutional reform. What may be required from the international community on this issue is consensus, absent so far, but more importantly, policy agility. Moïse’s assassination potentially triggers a change of heart among the late president’s domestic critics, opposed until now to the referendum. In a changed political dynamic, they may now conceive of a restructured and more credible constitutional reform process. If so, this would point to a timetable that includes a referendum followed by an electoral calendar. This is a heavy lift for Haiti’s fractured political community and civil society actors.

For starters, it would have to include a workable agreement regarding some form of an interim governance structure. This is fraught with the dangers of a timeline that could stretch out well into 2022. The international community should encourage consensus without dictating the specific terms, but it is also likely to be anxious with an open-ended political timeline. Nonetheless, in some technical arenas related to electoral machinery, time should not be wasted. A path forward might redirect the institutional capacities of the OAS toward focused attention on election readiness, including voter registration, as well as domestic and international election monitoring. This is a complex mission that needs to be supported by other actors, including from CARICOM’s own institutional skills in this arena, as well as experienced NGOs (domestic and international).

A third arena that will quickly shape the character of international community engagement will involve addressing Haiti’s political and societal violence. There is no doubt that the Haitian National Police needs external support, but key international actors (notably the United States) will want to pause and obtain an accurate diagnosis—not just of the short term concern with shoring up Haiti’s interim leadership (an issue in of itself), but also of the mid-term scenarios (twelve months) and unknowns associated with Haiti’s turbulent environment. This includes some expert assessments toward restricting arms and drug movements that feed Haitian gang violence—this is a regional problem in which U.S. policy simultaneously shapes efforts to curb these flows while also being one of its key sources. Obviously, little of this may matter unless a credible political consensus emerges among Haiti’s fractious political community regarding a path forward out of the current crisis. While this will help in mitigating rising gang violence, a consensus also entails a renewed social contract among Haiti’s key political and civil society actors—a pressing need and an important task that international actors (notably NGOs) can encourage.

There is a long road ahead for Haiti and the United States has a role to play, albeit one that can differ from past engagements. The situation in Haiti presents the United States with an opportunity to have a leadership role through active coordination. The Biden administration, at the outset of its term, highlighted that it would reengage with the international community and would reembrace multilateralism—the aforementioned arenas of international engagement present the administration with an opportunity to turn this rhetoric into policy action by playing the role of facilitator and coalition builder.

The stakes are high. Lives and livelihoods are at risk; events in Haiti don’t operate in a vacuum and its ensuing challenges are likely to have consequences across the rest of the Caribbean.

Georges Fauriol is a fellow with the Caribbean Policy Consortium and a Senior Associate at the Center for Strategic & International Studies (CSIS).

Wazim Mowla is the assistant director for the Caribbean Initiative at the Atlantic Council’s Adrienne Arsht Latin America Center and is a Non-Resident Scholar at Florida International University’s Jack D. Gordon Institute for Public Policy.