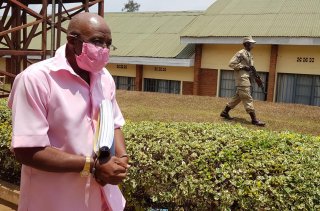 On November 9, 2005, President George W. Bush awarded Paul Rusesabagina, a Rwandan hotelier, with the Presidential Medal of Freedom. Rusesabagina “bears witness to an evil of the 20th century,” Bush said, as he repeated the story made famous by the Hollywood film “Hotel Rwanda.” Today, Rusesabagina sits in a Rwandan prison, facing trial on charges of terrorism, arson, kidnap, and murder charges. While Rusesabagina deserves praise for his 1994 actions, such good deeds cannot trump the reality of what Rusesabagina has become. In effect, he has become the Rwandan equivalent of Burmese politician and Nobel Laureate Aung San Suu Kyi. While many in the West once praised Aung San Suu Kyi as a democrat, such past praise cannot erase her subsequent apologia for the Rohingya genocide.

Paul Rusesabagina’s path to fame began when author Philip Gourevitch interviewed him for his 1998 book, We Wish to Inform You That Tomorrow We Will be Killed with Our Families. Sen. Bob Dole awarded him the Immortal Chaplain’s Prize for Humanity. After Hotel Rwanda’s release, Rusesabagina both hit the speaker’s circuit in earnest and augmented his activism. On February 20, 2005, for example, he spoke at a Chicago church and shortly after set up the Hotel Rwanda Rusesabagina Foundation, in theory, to support children orphaned and women abused during the genocide. On October 3, 2005, he testified in the case of Ephrem Nkezabera, the so-called “genocide banker” whom Belgian authorities had found hiding in Brussels and, just over a month later, accepted the Presidential Medal of Freedom.

Perhaps such fame went to his head and whetted his ambitions. In June 2006, he founded the Parti Démocratique au Rwanda-Ihumure Party. That same month, he flew to Barcelona and met a number of activists from and sympathizers to the Democratic Forces for the Liberation of Rwanda (FDLR), an armed group dedicated to the violent overthrow of the Rwandan government. The United Nations Security Council, United States, and European Union have designated the FDLR to be a terrorist group.

As Rusesabagina grew more active, he also became more confrontational. In a June 14, 2006, Voice of America interview, he falsely alleged ongoing genocide against the Hutu, the group whose political leaders had perpetrated the original genocide. This accusation of “double genocide” and, in effect, moral equivalence for the crimes in Rwanda, would become a frequent theme in subsequent media interviews. In a February 6, 2007, Chicago Public Radio interview, for example, he alleged that Rwandan Patriotic Front, the party of Rwandan president Paul Kagame and the group which ousted the Hutu leaders conducting genocide in 1994, had actually directed the genocide as part of a false flag operation. This is akin to suggesting the Armenians massacred themselves to slander the Turks, or the Jews were responsible for the Holocaust. This same paranoia and conspiratorial embrace was on display when, against the backdrop of Kagame's visit to the United Kingdom, Rusesabagina sent an open letter to Queen Elizabeth II. A subsequent Chicago radio interview claimed that Rwandan forces were burning Hutus en masse and burned their bodies in the forest. While some human rights groups repeated the accusations uncritically, investigators could find no forensic evidence; neither open pit fires nor the ovens Rusesabagina alleged could reach the heat needed to destroy bone. Simply put, Rusesabagina had lied. As a Belgian citizen living in Brussels, Rusesabagina is entitled to freedom of speech; he can spin whatever conspiracies he wants at the expense of his own credibility. Where Rusesabagina really crossed the line, however, was with his embrace of the FDLR and its terror campaign.

In 2007, for example, he traveled to Cape Town for meetings with the FDLR that, at the time, was conducting an armed struggle against Rwanda. In effect, the FDLR was to Rusesabagina’s political grouping what Hamas and Hezbollah militias are to the political leaders who seek to benefit from their violence. True democrats divorce themselves from armed militias; they do not seek to utilize them to gain legitimacy voters deny them at the ballot box. A May 17, 2008 SMS between FDLR leaders Victor Byiringiro and Ignace Murwanashyaka referred to collaboration with Rusesabagina and the FDLR’s Democratic Republic of Congo-based Walikale battalion. In December 2008, Rusesabagina’s PDR-Ihumure formed an alliance with several opposition groups including with FDLR activist Félicien Kanyamibwa, who formed the FDLR splinter group Ralliement pour l’Unité et la Démocratie–Urunana (RUD-Urunana). Speaking at the University of Central Florida, Rusesabagina repeatedly called the FDLR a “Rwandan liberation movement.”

In November 2010, the Rwandan government sent a former request for judicial cooperation to Belgium in order to question Rusesabagina on issues of terror financing; Belgian authorities investigaed the foundation of the request, found the evidence credible and, in June 2011, questioned Rusesabagina for three hours in the presence of Rwandan prosecutors. The following month, the Rwandan Prosecutor-General requested legal assistance from the U.S. government to compel Western Union to turn over records of Rusesabagina money transfers to FDLR operatives. The Department of Justice subsequently turned over the records and the U.S. Treasury Department designated the FDLR to be a terror group.

More recently, Rusesabagina used the Rwandan Movement for Democratic Change as his preferred political platform. The name of his party may have changed, but not its policy. On July 4, 2017, for example, it issued a communiqué announcing the armed struggle against Rwanda, and in the days following, it claimed responsibility for a string of attacks. The following year, after years of systematically building its case through established legal channels, Rwanda sent an international arrest warrant and extradition request to Belgium.

On August 27, 2020, Rusesabagina arrived in Kigali after boarding a plane he believed was destined for Bujumbura, the largest city in neighboring Burundi. Rusesabagina and his supporters said a rogue pastor lured him onto the plane so that he might speak at a Burundian church. On its face, this makes no sense. Few if any church groups—and none in Burundi whose per capita income is less than $800 per year—have the resources to send private planes internationally to pick up guest speakers. In reality, it appears something far more nefarious was at play: In the cynical diplomacy of the region, rebel groups dedicated to the ouster of governments such as Rwanda found shelter and support in neighboring countries. This certainly has been the dynamic in Africa’s Great Lakes region for decades. Quietly, though, and with a great deal of success, the State Department has pressured countries in the region to break that dynamic. Rusesabagina’s attempts to reach Burundi with a private jet appears far more likely an attempt to get Burundi President Évariste Ndayishimiye to reconsider his country’s cut-off of assistance for armed groups and Rusesabagina allies seeking to overthrow the Rwandan government. This is why so many academics including Dickinson University President Margee Ensign and dozens of professors and lawyers who have studied Rwanda for years have come together to condemn the superficial and counterfactual narratives that Rusesabagina’s supporters seek to promote based on both the sanitized treatment Hollywood gave Rusesabagina and resentment toward Kagame’s economic success.

At his Presidential Medal of Freedom ceremony, Bush continued to quote Rusesabagina. “I’m not a hero. I'm simply a man who made a decision to hold on to my family, my life, and my beliefs until the end,” the president quoted the former hotel manager. Unfortunately for Rwanda, the beliefs Rusesabagina has sought to hold to the very end are moral equivalency, genocide denial, megalomania, and support for terror.