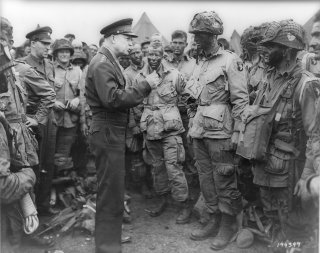 In a public letter to a New Hampshire newspaper in early 1948, General Dwight D. “Ike” Eisenhower, then Chief of Staff of the Army, poured cold water on the burgeoning movement, spearheaded by prominent U.S. citizens and politicians, to persuade the country’s most preeminent soldier to enter politics beginning with the state’s Republican primary in March of the same year. “[L]ifelong professional soldiers, in the absence of some obvious and over-riding reason, [should] abstain from seeking high political office,” the general emphatically stated.

Yet less than three years later, in January 1951, such an overriding reason emerged in the nation’s presidential political fray of 1952. The Grand Old Party (GOP) gathered around Robert A. Taft, the Republican Senator from Ohio. Nicknamed “Mr. Republican,” Taft was the leader of the party’s nationalist Old Right or Republican Old Guard, principally known for their strong anti-statist and anti-interventionist positions in domestic and foreign policies perhaps most evident in their opposition to New Deal liberalism and U.S. entry into World War II. Eisenhower, in April 1951, had assumed his role as the first NATO supreme commander. Taft’s known hostility to NATO in conjunction with public opposition in the country to sending U.S. ground troops to Europe, however, concerned Eisenhower that whatever he would accomplish diplomatically and militarily abroad would be nullified politically at home. Eisenhower’s sentiment was reinforced by some of his closest friends, who were alarmed at the prospect of a Taft presidency. “We cannot let the isolationists gain control of government if we are to endure as a free people over the years,” General Lucius Clay wrote to Ike, stressing in a separate note that “nothing accomplished there [NATO] would have any real permanency,” should the senator from Ohio enter the White House.

Eisenhower invited Taft to a tète-à-téte at the Pentagon in early 1951 to convince him of the need for a NATO buildup to confront the growing Soviet menace on the old continent. According to Eisenhower’s account, he asked Taft whether he and his Old Right congressional associates would support a bipartisan policy of collective security for the United States and Europe. If Taft were to answer “yes,” then Eisenhower would remain in Europe as supreme commander for the “next years,” if “no” then “NATO would be set back, and I would probably be back in the United States,” the general recalled. Taft declined, arguing that then U.S. President Harry Truman had no constitutional right to send troops to Europe. The conversation, Eisenhower said, “aroused my fears that isolationism was stronger in the Congress than I had previously suspected.” After the meeting, he tore up a prepared statement disavowing politics. Eisenhower later claimed that this marked the beginning of his presidential ambitions.

Yet Taft was no longer an isolationist. While it was true that the senator, elected to the U.S. Senate ten months before the outbreak of World War II, was one of the leading voices of the nationalist anti-interventionist wing of the GOP in the early 1940s—notably opposing the Lend-Lease Act of 1941—by the time of the “long talk” between him and Eisenhower in 1952, his foreign policy position had matured and shifted from isolationism to what realist international relations scholars have labeled “offshore balancing”—though neither Taft nor any other policymakers labeled it as such. An offshore balancing strategy recognizes spheres of influence, regional balances of power, and pushes for burden-shifting away from the United States to its allies and partners. John J. Mearsheimer and Stephen M. Walt summarized the strategy thus in 2016: “Instead of policing the world, the United States would encourage other countries to take the lead in checking rising powers, intervening itself only when necessary.” Conversely, Hal Brands offers a more critical definition: “In its simplest form, offshore balancing envisions slashing U.S. force posture and alliance commitments overseas, and undertaking a market retrenchment in U.S. policy more broadly. Its guiding premise is that such retrenchment can lead to greater security at a lesser cost—that less, in other words can really be more.” At the core, an offshore balancing strategy for the United States means maintaining regional hegemony in the Western hemisphere while maintaining a balance of power in Asia and Europe, chiefly through allied nations buoyed by U.S. military aid, thus preventing any other great power from dominating these geo-strategically important regions.

Taft pushed exactly such a strategy in the 1950s, although never formally naming it so. Inspired by the lessons of Great Britain during the Napoleonic Wars, the senator proposed a continental defense and selective containment strategy that connected key strategic points across the globe underpinned by U.S. air and naval power, all reinforced by balance-of-power politics and the deterrent effect of nuclear weapons—in short, an offshore balancing strategy. As Colin Dueck in his study of Republican foreign policy since World War II notes, by 1951, “Taft had come a long way from his prior ‘isolationism.’” Given his eminent standing within the GOP, the 1952 Republican primary was the only window for such a strategy at the national political level as an alternative to the bipartisan internationalist consensus and containment strategy that emerged following the 1947 announcement of the Truman Doctrine. Unfortunately, Taft poorly promoted his vision. Given ongoing debates about the future direction of U.S. foreign policy ranging from “a new isolationism” to continued “liberal hegemony,” it may be opportune to reexamine Taft’s ideas from the 1950s.

Taft’s transformation from isolationist to an advocate for offshore balancing is best illustrated by analyzing the only book the senator wrote in his lifetime: A Foreign Policy for Americans. Published in November 1951, the book, according to the author of the authoritative Taft biography, Mr. Republican, is “the most reliable single guide to his thinking.” In it, Taft laid out his blueprint for a new global U.S. strategy and defense policy to confront the Soviet Union while keeping defense spending and global U.S. commitments relatively low. Taft’s principal concern was that U.S. over-commitment abroad would lead to the erosion of limited government at home and, most importantly for Taft, and increase executive authority.

The book was partially influenced by a great congressional debate over Truman’s decision in the fall of 1950 to commit several U.S. divisions to a new NATO defense force in Europe and overall increases in defense spending amidst the Korean War. U.S. military planners in the late 1940s and early 1950s were aiming to create a 76th division NATO army, including forty-five hundred aircraft, by 1957, with a sizeable U.S. contingent. (The eventual U.S. contribution would be the 7th Army.)

Taft’s principal concern was that such a force committed the United States to a land war in Europe and Asia. “What I object to is undertaking to fight that battle (…) primarily on the vast land areas of the continent of Europe or the continent of Asia, where we are at the greatest possible disadvantage in a war with Russia,” Taft writes. “The first principle of military strategy is not to fight on the enemy’s chosen battleground, where he has his greatest strength.” This was also informed by recent U.S. experiences in North Korea. Exactly a year prior to the book’s publication date in November 1950, the 8th U.S. Army and its South Korean allies were routed by Chinese and North Korean troops at the Yalu River on the border between North Korea and China and were forced to retreat to below the 38th parallel bisecting the Korean Peninsula.

Yet, Taft’s reluctance to commit ground troops did not mean abandoning allies. Taft, noting that the United States is “of course, interested in the defense of Europe” emphasized that it is ultimately within their national interest for European countries to provide “not only the bulk of the troops but also the bulk of the interest and initiative (…) [but] finally take over the responsibility”—a refrain heard to this day. Aware of his reputation as an isolationist, Taft reiterated, however, that he did not agree “with those who think we can completely abandon the rest of the world and rely solely on the defense of this continent.” He merely questioned those who had equated not sending U.S. ground troops to the old continent with “running out on Europe” despite the United States having “definitely agreed to go to the defense of these countries if they are attacked.” What Taft suggested instead was an offshore balancing strategy for the United States that does not rely on sending large ground forces overseas as part of long-term defense pacts, but rather relies on U.S. air and maritime power, paired with the United States’ burgeoning nuclear arsenal, to deter and, if need be, defend against Communist military actions.

At the core was the idea of the United States acting as an independent arbiter of power similar to Great Britain, which “brought about the balanced peace of the last half of the 19th century.” Driving home his point about ground troops, Taft also noted that London “seldom committed any considerable number of British land troops to continental warfare (…).” Instead, it relied on its powerful Royal Navy. The United States, even beyond its considerable naval fleet, would principally rely on the nuclear-capable air force, “the best possible defense for the United States” and “also the best deterrent to war.” This “air-atomic” force, as he called it in a January 1951 Senate speech, would have global reach and would act as the prime deterrent against Communist aggression.