How to Address the Greater Russia-China Alignment 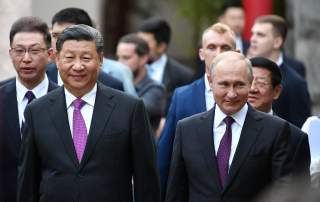 The world’s leaders will gather this week for the G20 Summit in Japan. All eyes will be on President Donald Trump’s highly anticipated meetings with Chinese president Xi Jinping and Russian president Vladimir Putin. But as observers look for indicators of how relations between the United States and its strategic rivals will evolve, another less appreciated dynamic is progressing. Tensions between the United States and both Russia and China continue to run high; meanwhile, Xi and Putin are drawing closer. The two leaders have been strengthening ties in ways that will make it more difficult for Washington to compete with either country. In this great-power triangle, Trump increasingly looks like the odd man out.

It’s not that Trump has written off efforts to improve relations with Putin and Xi; to the contrary. Trump has shown an affinity for both strongmen and regularly speaks of his desire to befriend them. But despite Trump’s rhetoric, his administration’s policies—a simultaneous trade war with China and ever-mounting sanctions on Russia—have pushed Putin and Xi closer together. Putin has called Xi his “best and bosom friend” and Xi just celebrated his sixty-sixth birthday with Putin. The camaraderie between the two leaders has been a key driver of the growing cooperation between the two countries.

At the heart of the alignment between China and Russia is their shared interest in undermining U.S. influence globally. The two countries are united in their mutual displeasure with the United States and the U.S.-dominated international order that they feel disadvantages them. But while Russia and China may have initially banded together in discontent, their repeated engagement on areas of mutual interest is fostering a deeper and enduring partnership. It is clear that China will pose the greatest challenge to U.S. interests for the foreseeable future, but Beijing’s increasing collaboration with Moscow will amplify that challenge.

The implications of increasing alignment between Russia and China are already apparent. Russia and China are in virtual lockstep in their approach to North Korea and they are cooperating to support Iran in an attempt to offset the damage and isolation that Washington’s “maximum pressure campaign” is designed to impose. Moscow and Beijing also share interests in propping up Nicolas Maduro in Venezuela. Additionally, earlier this month they coordinated their positions in the United Nations to block a statement condemning the Sudanese military government’s killing of civilians (their voting record at the UN Security Council has been nearly identical). In short, Russia and China share values and a view of the way the world should be ordered. As cooperation between them grows, Washington will find it increasingly difficult to protect its interests around the world.

Perhaps nowhere would the impact of greater collaboration between China and Russia be more significant than in the realm of democratic norms and practices. Both Xi and Putin seek to enshrine norms around Internet governance, cybersecurity, censorship, and human rights that insulate their regimes from external pressure and ideas that might challenge their rule. Russia’s assault on democratic institutions, including attacks on elections, the spread of corruption, and disinformation campaigns weaken actors’ commitment to democracy. Meanwhile, China’s opaque and corrupt infrastructure deals through its Belt and Road initiative are enfeebling democratic actors and bolstering autocrats. Both countries are exporting their authoritarian tactics, most notably China’s export of its surveillance systems and efforts to train authoritarian governments to control their citizens. Overall, Russia and China calculate that weakening democracy can accelerate the decline of Western influence and advance their geopolitical goals.

Washington must come to terms with this China-Russia alignment and work to address and manage it. To contain the depth of alignment, Washington must look for opportunities to strain the seams in the Russia-China relationship. Russia and China may be drawing closer, but their interests—and especially their approaches—are not identical. Russia and China compete in the Middle East, for example, for military sales and nuclear energy deals. And their very different approaches to Europe could be a source of strain. In communicating with Beijing, Washington should underscore how Russian interference in these countries could generate instability that threatens China’s growing economic interests.

Meanwhile, the Trump administration is focused on combating China’s unfair economic practices, a worthy undertaking. But any trade war “victory” will be incomplete if Washington does not address Beijing’s challenge, in collaboration with Moscow, to the very fabric of the rules-based order that underpins continued U.S. global leadership and prosperity. Washington will be ineffective if it seeks to go it alone.  Pushing back against the illiberal influence of an aligned Russia and China will require the collective heft of Allies and partners. The time is ripe to tackle this issue with America’s European Allies. Europe has grown more attuned to—and concerned about—the threat that China poses and shares the U.S. imperative to compete with Russia and China.

Beijing and Moscow are betting that disunity amongst the United States and its European allies over the trade war, Iran sanctions, and U.S. tariffs will prevent a collective response to their actions. The Trump administration should surprise them by reaching out to Allies and partners to build a coalition to prevent and plan for growing Chinese and Russian alignment. The prosperity, security, and legitimacy of the United States and its European allies as democracies governed by the will of their citizens represent a rebuke to the Chinese and Russian regimes and, united, will stymie their bid for global leadership.

Andrea Kendall-Taylor is a senior fellow and director of the Center for New American Security’s Transatlantic Security Center.

David Shullman is a senior advisor at the International Republican Institute and an adjunct senior fellow at Center for a New American Security.