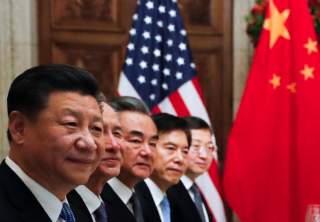 CHINA HAS begun to assert a grand vision of its own for a new world. Speaking at the Communist Party’s nineteenth Congress last October, President Xi Jinping presented his country’s authoritarian system as a “new option for other countries,” representing “Chinese wisdom and a Chinese approach to solving the problems of mankind.”

When President Donald Trump took the oath of office, the People’s Daily editorialized that “Western-style democracy used to be a recognized power in history to drive social development. But now it has reached its limits.” That kind of rhetoric, though bombastic, is increasingly a hallmark of what some call a pragmatic form of Chinese authoritarianism.

President Xi’s appeal to the legacy of Karl Marx can also be seen in these terms. The campaign in China to celebrate the twentieth anniversary of the birth of the German philosopher was directed straight from the top. Xi extolled neither the perils of capitalist exploitation nor the class struggle but uses Marx’s life and work as a prism through which China can resist the bullying of Western imperialists and so reclaim its former greatness. The commemorations included a special program to ensure that message reached younger Chinese.

It would be a mistake, then, to force the current U.S.-Sino relationship into a neat, Cold War straitjacket. For one, the concept of the “West” in Chinese rhetoric is often loosely deployed: as Rana Mitter points out, it can be used to assail “liberalism and constitutional reform but not Marxism or industrial capitalism.” Second, Xi does not necessarily envisage the export of what he calls the “China model” or “China solution.” Where Soviet leaders came to see the preservation of the USSR as the overriding duty of all Communist parties and their supporters around the world, Xi presents the China model more as an example “for other countries and nations who want to speed up their development while preserving their independence.” His argument is that China illuminates a new path to modernization, though it is not yet clear as to whether China is to actively lead this new world or to stand aloof as an example to developing countries.

IF ONE, however, is to make this Cold War comparison, it should be said that China has more claims than the former Soviet Union to be an ideological rival to the United States. It calls on the proud claim of five thousand years of continuous history, with a particular focus on the one hundred years of humiliation it suffered at the hands of the West from the middle of the nineteenth century. On the day Xi was sworn in as president in 2012, he and the new leadership team changed into more somber clothing and undertook a highly publicized visit to the National Museum of China, making a special point of taking in the permanent display that tells the story of the country’s “Road to Rejuvenation.” Speaking after his visit, Xi proclaimed that “the Chinese nation has suffered unusual hardship and sacrifice in the world’s modern history,” but its people “have never given in, have struggled ceaselessly, and have finally taken hold of their own destiny.”

Much of the alarm in the United States and indeed among other American allies in Asia about the ideological dimension of China’s rise emanates from the fact that this kind of rhetorical confidence and the projection of a more strident Chinese nationalism is accompanied by a range of both internal and external markers of Beijing’s growing muscularity at home and abroad. In February, Xi rewrote the national constitution to abolish presidential term limits; more recently he has not only deployed anti-ship cruise and surface-to-air missiles on contested territories in the South China Sea, but also dispatched bombers there too: all moves that Xi, in his September 2015 remarks at the White House, said he would not take. China also wants to be the first country to soft land a probe on the far side of the moon.

BUT JUST as China is starting to spread its strategic and geo-economic wings, the “America First” tendency of the Trump presidency is hardening. Whatever restraints imposed by the so called “adults in the room” during his first two years in office—the changes in the White House national security team mean that Trump is now on the loose, an untethered president doing as he wishes on the world stage. It is not just that Trump is swinging a wrecking ball through both the U.S. alliance and multilateral trading systems; the prevailing sense of anxiety is magnified by the fact that he is an avowed sceptic of the post-Second World War Pax Americana. Unlike the majority of his predecessors since 1945, Trump has not invoked the rhetoric of America’s missionary impulse. Indeed, he brandishes a kind of fatigue with both mythological and military overstretch, a sentiment he exploited on his path to the presidency.

Trump harks back to an earlier version of this myth identified with the Monroe Doctrine: the idea that the United States’ role is not to march its armies into other lands or help other countries but to stand apart from international troubles as a shining exemplar, to express a purity of purpose in its own backyard. The difference is that Trump is animated not so much by the virtues of splendid isolation but by grievance and resentment towards previous American leaders who in his eyes have betrayed their people by indulging in misguided and adventurous attempts to transplant democracy abroad. For him, the burden that the United States assumed in the Cold War and post-Cold War eras had become something of a charity project. Still, it is also the case that Trump wants to make America “great again,” believes that Washington should get its own way in the world and that by doing so he can re-establish U.S. global leadership.

In that sense, President Trump represents a difference in style rather than a clean break from American exceptionalist ideology.

But Trump is also widely criticized for eroding the “liberal international order,” which, since it was created and led by the United States for much of the period following Second World War, is tantamount to charging him with undermining the American idea itself. A roll call of foreign policy grandees in the United States has lined up to excoriate the president for what they see as his fracturing of the American ethos. “Most often,” wrote former Deputy Secretary of State Bob Zoellick, “U.S. nationalism and internationalism have been in synchrony, not conflict, and that mixture created America’s unique global leadership.” Similarly, former senior foreign policy adviser to Hillary Clinton, Jake Sullivan, sees the task now as figuring out “how to convince people that principled nationalism and internationalism are not incompatible.” Seen in this light, Trump is driving a stake through the country’s very essence. Such a state of affairs is profoundly disturbing for an elite nurtured by deeply held beliefs in U.S. primacy. It is little wonder that American bookshelves are groaning under the weight of new tomes attempting to diagnose the causes of this ideological crisis.

Adding to this sense of drift is the perception in Washington and elsewhere that China, via the creation of the Asian Infrastructure Investment Bank and the unfurling of its Belt and Road initiative, is determined over time to replace that order with a new one of its own. Late last year, the U.S. National Security Strategy’s nomination of China as a “revisionist” power was in part a response to this new departure in Beijing’s ambition. More recently, Vice President Mike Pence's no-nonsense speech on the United States’ policy towards China at the Hudson Institute in October, 2018, and his forthright remarks about Chinese strategic and economic behavior during his recent swing through Asia, have caused a number of excitable commentators both here and abroad to herald the inauguration of a new U.S.-led Cold War, or “Cold War 2.0,” against China.

FOR THE United States and its vision of the world, it wasn’t meant to turn out this way. In his important book The China Fantasy, James Mann demonstrated that since the late 1970s, the American people have been told an optimistic tale of China’s future by their political leaders and pundits, who in various ways have pushed the line that China’s embrace of capitalism would ultimately lead to greater political liberalization and democracy—that China ultimately would become “just like us.” Bill Clinton, for example, famously told Chinese president Jiang Zemin at a news conference in Washington in October 1997 that his country was on “the wrong side of history.” And, as a presidential candidate speaking on China policy, George W. Bush observed that the “case for trade is not just monetary, but moral.” “Economic freedom,” he added, “creates habits of liberty.”

Other Western leaders have followed suit. In 2005 British prime minister Tony Blair announced that there was an “unstoppable momentum” towards democracy in China. And only last year Australian foreign minister Julie Bishop echoed a version of this mindset when she told an audience in Singapore—with China squarely in her sights—that “history also shows democracy and democratic institutions are essential for nations if they are to reach their economic potential.” Never mind, of course, that democracy might also prompt an even more intense form of Chinese nationalism, a development that would hardly be in the strategic interests of U.S. allies in Asia.