This Is How America and China are Weaponizing the Coronavirus 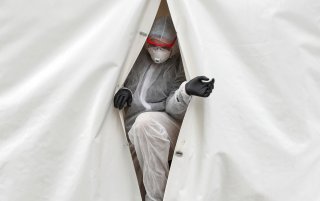 Three months after South Carolina’s secession, newly minted Secretary of State William H. Seward hatched a strategy that, he believed, would avert the looming civil war. On the morning of March 31, 1861, Seward learned that Spanish forces had occupied Santo Domingo, while a French fleet was sailing towards Haiti. Seward seized the opportunity, penning a long and rambling missive to Abraham Lincoln. “I would demand explanations from Spain and France, categorically, at once . . .” Seward wrote, “and if satisfactory explanations are not received from Spain and France, would convene Congress and declare war against them.”

Seward’s believed his plan would divert public attention from the issue of slavery, tempt southern slaveholders with new acquisitions in the Caribbean and provide the patriotic glue to reseal the divided nation. And, Seward added, he would happily lift the burden of implementing this strategy from Lincoln’s shoulders. Calculating that his secretary of state was still smarting over being spurned for the presidency, Lincoln let him down easy. The country could only fight “one war at a time,” he said, and a war against either France or Spain would be one too many. And on the issue of war and peace, Lincoln added, he was capable of making that decision on his own. Chagrined, Seward pocketed his proposal and never mentioned it again.

In truth, Seward’s “foreign war panacea” was not as wacky as it now seems. After all, the United States had fought two previous wars on similarly shaky grounds—and they’d turned out fairly well: the War of 1812, while ill-conceived, was followed by a new sense of American patriotism, while the Mexican War, while divisive, had resulted in the acquisition of Texas. And so the idea that America did not go abroad “in search of monsters to destroy” (as John Quincy Adams famously described it), had proven premature. America not only regularly searched for monsters, it did so to explicitly divert attention from its own failings.

And that, it appears, is what is happening now in the case of the coronavirus—and China. As the disease has spread, senior Trump administration officials have attempted to divert attention from their own ineptitude by suggesting the sickness was purposely hatched by a malevolent China. The blame-game began in late January, soon after the coronavirus appeared in the United States, Dany Shoham told the Washington Times that a “Israeli biological warfare analyst,” who claimed that the coronavirus originated in the Wuhan Institute of Virology, a lab linked to China’s “covert bio-weapons program.” On February 16, Sen. Tom Cotton (R-Ark.), reinforced Shoham’s theory, saying that China’s lack of transparency on the virus suggested the disease was engineered. On February 20, rightwing commenter Steve Bannon amplified the claim on G News, a website funded by his benefactor and Chinese exile Guo Wengui, saying the “demon virus” was manufactured by the Chinese Communist Party. Two days later the claim was featured on the front page of the New York Post and two days after that reactionary radio host Rush Limbaugh said the virus was “probably” a “Chicom laboratory experiment.”

From there, the China-is-responsible narrative became a full-throated feature of rightwing Washington. Administration officials began referring to the disease as the “Chinese virus,” the NSC circulated an internal directive calling it the “Wuhan virus,” Secretary of State Mike Pompeo tried to convince the G-7 to use the term in its official communique and one White House official described the pandemic as “the kung flu.” The language implied that the coronavirus was not a weed that sprouted from human soil, but a Beijing bio-poison spread by conspiring commissars. But that China had become the newest shiny object in the Washington blame game was something of a surprise, as Trump himself had spent considerable time praising China’s efforts to contain the disease—which he described as “professional” and “capable.” But by mid-March, the Trump administration, and Trump himself, were referring to the pandemic as the “Chinese virus”—with National Security Adviser Robert O’Brien suggesting on March 11 that a Chinese cover-up of the disease had cost lives.

By then, China had already fired back. When the United States placed a ban on travelers arriving from China on January 31, the Beijing government slammed the decision, describing it as “neither based on facts, nor helpful.” Two weeks later, on February 17, as rumors of Chinese perfidy began to circulate, the People’s Daily, the official mouthpiece of the Beijing government criticized the United States for its “dark mentality.” But when Robert O’Brien claimed that China’s “cover-up” had cost lives the Beijing government responded with a conspiracy theory of its own. On March 12, Zhao Lijian, a spokesperson of China’s Ministry of Foreign Affairs said the virus had entered Wuhan when U.S. military personnel visited the city during the October 2019 Military World Games. While the theory was already being retailed by Chinese social media sites, Zhao’s claim represented a unique moment, as his statement was almost certainly approved by China’s government. By April, Chinese officials were expressing outrage with what they described as Washington’s “blame game”—describing the Trump administration’s critique of their handling of the crisis as “shameless” and “morally repulsive.”

Ironically, this escalating and unseemly back-and-forth seemed to confirm the notion among many scientists that both Beijing and Washington were desperately trying to divert attention from their own ineptitude while losing focus on fighting the real enemy. “There’s no question that Beijing battened down the hatches after the first cases were reported in Wuhan,” a leading epidemiologist who consults with the U.S. government told me, “and that was absolutely irresponsible. The international community needed them to be open, and they weren’t. Their response was fearful, inept, bungled and counter-productive. But there’s a lot of truth to China’s claim that the United States engaged in a xenophobic blame game to divert attention from their own incompetence. This whole thing is childish, unnecessary. If there was ever a need for international cooperation, this is it, and both sides dropped the ball.”

Behind the scenes, those scientists battling the coronavirus have pushed back against the China-is-responsible narrative, pointing out that, even as the Chinese government “battened down the hatches,” Chinese medical experts were signaling the potential enormity of the crisis. When a group of patients exhibiting symptoms of an unidentified viral pneumonia began flooding Wuhan hospitals on December 26, the Chinese medical community scrambled to find a cause. By December 30, they had linked the disease to the Hunan Seafood Wholesale Market, which was quickly closed. Most crucially, on January 9, Chinese investigators posted the genome sequence of “the new form of coronavirus” on a public genetic data repository.” The publication of the sequencing was a firebell-in-the-night moment, indisputable evidence that no matter what the Chinese government was saying—or suppressing—China’s scientists were signaling that what they had discovered in Wuhan had unmistakable global implications.

Writer and investigator Mark Olshaker, coauthor of the seminal study, Deadliest Enemy: Our War Against Killer Germs (with public health scientist Michael Osterholm) cites this decision as evidence that once Chinese medical officials “realized that the virus was highly infectious, it scared the hell out of them.” While China dragged its feet on providing follow-on medical data, Olshaker goes on to point out, the publication of the genome sequence should have scotched the conspiracy theories that took hold in the United States soon thereafter, including the notion that the virus was manufactured in Wuhan as a weapon. If the Chinese had actually weaponized the coronavirus, the lead epidemiologist with whom I spoke to says that it is highly unlikely they would have published its genetic sequence. And it’s also doubtful that the virus itself even came from a lab, as Bill Hanage, an associate professor at Harvard’s T. H. Chan School of Public Health told one reporter. “If there is evidence to really support this theory beyond the coincidence of the location of the lab, then I haven’t seen it,” Hanage said, “and I don’t make decisions on the basis of coincidence.”

Olshaker agrees: “There are two things that we know for certain. There is a bio-lab in Wuhan and the coronavirus first spread in Wuhan. But to conclude that the two are linked in a nefarious way just doesn’t hold up. We know this virus comes from bats, and we know there’s a market for that in Wuhan. We also know that the Wuhan Institute of Virology does research on infectious diseases for which bats are thought to be the reservoir. But, you know, if you wanted to weaponize a virus there are many more possibilities at hand that would be far more lethal to more people and wouldn’t have such a long incubation time—like smallpox or anthrax,” he says. “That would make a lot more sense. I think it’s a reasonable presumption that if China had wanted to weaponize the coronavirus, they would have put a lot of work in on developing a vaccine for it, to protect their own population. But there’s no evidence of that. None.”